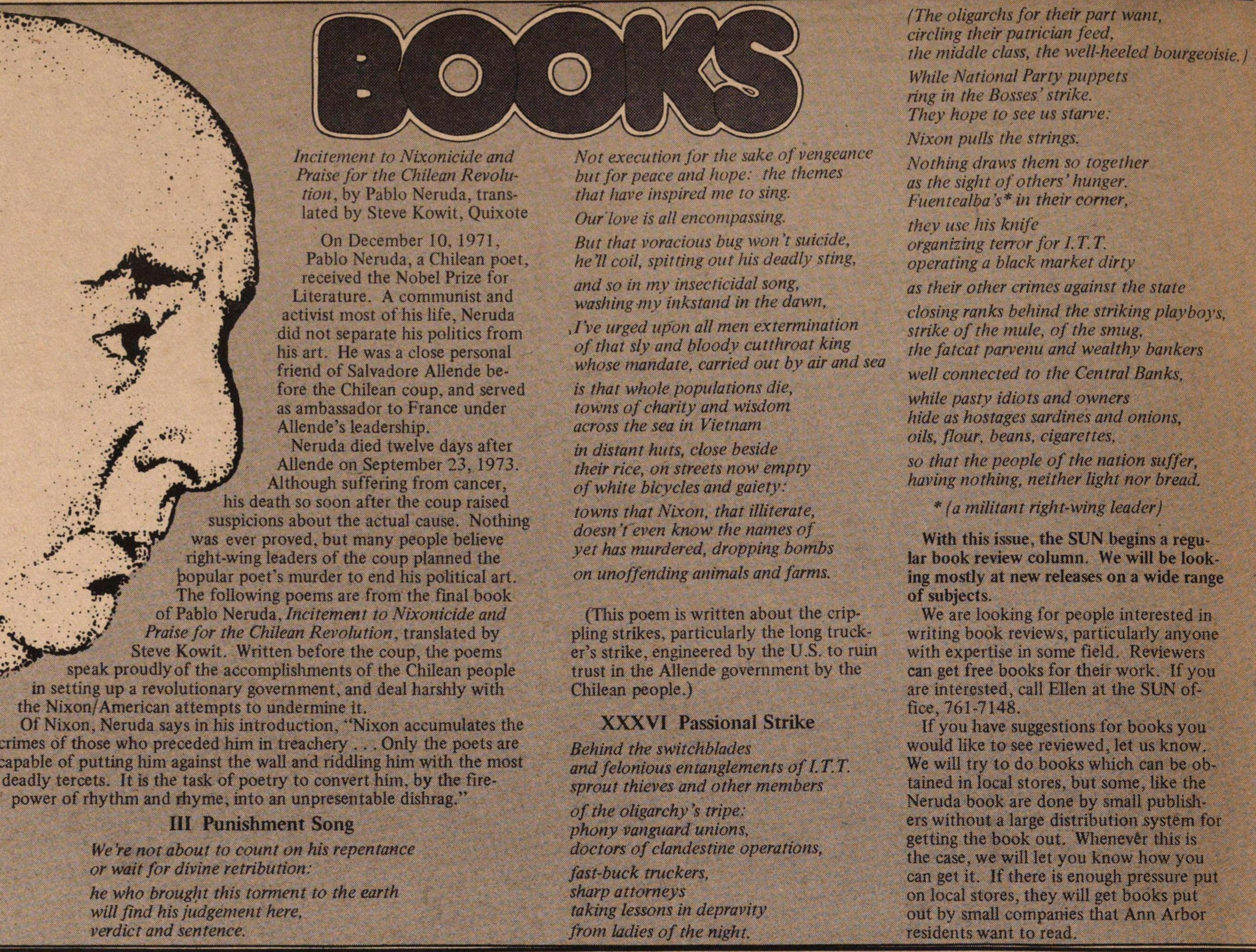 lncitement to Nixoncide and Praise for the Chilean Revolution, by Pablo Neruda, translated by Steve Kowit, Quixote

On December 10,1971, Pablo Neruda, a Chilean poet, received the Nobel Prize for Literature. A communist and activist most of his life, Neruda did not separate his politics from his art. He was a close personal friend of Salvadore Allende before the Chilean coup, and served as ambassador to France under Allende's leadership.

Neruda died twelve days after Allende on September 23, 1973. Although suffering from cancer, his death so soon after the coup raised suspicions about the actual cause. Nothing was ever proved, but many people believe right-wing leaders of the coup planned the popular poet's murder to end his political art. The following poems are from the final book of Pablo Neruda, Incitement to Nixonicide and Praise for the Chilean Revolution, translated by Steve Kowit. Written before the coup, the poems speak proudly of the accomplishments of the Chilean people in setting up a revolutionary government, and deal harshly with the Nixon/American attempts to undermine it.

Of Nixon, Neruda says in his introduction, "Nixon accumulates the crimes of those who preceded him in treachery . . . Only the poets are capable of putting him against the wall and riddling him with the most deadly tercets. It is the task of poetry to convert him, by the firepower of rhythm and rhyme, into an unpresentable dishrag."

he who brought this torment to earth
will find his judgement here,
verdict and sentence.

Not execution for the sake of vengeance
but for peace and hope: the themes
that have inspired me to sing.

Our love is all encompassing.

But that voracious bug won't suicide,
he'll coil, spitting out his deadly sting,

and so in my insecticidal song,
washing my inkstand in the dawn,

I've urged upon all men extermination
of that sly and bloody cutthroat king
whose mandate, carried out by air and sea

is that whole populations die,
towns of charity and wisdom
across the sea in Vietnam

in distant huts, close beside
their rice, on streets now empty
of white bicycles and gaiety:

towns that Nixon, that illiterate,
doesn't even know the names of
yet has murdered, dropping bombs

on unoffending animals and farms.

(This poem is written about the crippling strikes, particularly the long trucker's strike, engineered by the U.S. to ruin trust in the Allende government by the Chilean People.)

Behind the switchblades
and felonious entanglements of I.T.T.
sprout thieves and other members

fast-buck truckers,
sharp attorneys
taking lessons in depravity
from ladies of the night.

(The oligarchs for their part want,
circling their partrcian feed,
the middle class, the well-heeled bourgeoisie.)

While National Party Puppets
ring in the Bosses' strike
They hope to see us starve:

Nothing draws them so together
as the sign of other's hunger
Fuentealba's * in their corner,

they use his knife
organizing terror for I.T.T.
operating a black market dirty

as their other crimes against the state

closing ranks behind the striking playboys,
strike of the mule, of the smug,
the fatcat parvenu and wealthy bankers

so that the people of the nation suffer,
having nothing, neither light nor bread.

With this issue, the SUN begins a regular book review Column. We will be looking mostly at new releases on a wide range of subjects.

We are looking for people interested in writing books reviews, particularly anyone with expertise in some field. Reviewers can get free books for their work. If you are interested, call Ellen at the SUN office, 761-7148.

If you have suggestions for books you would like to see reviewed, let us know. We will try to do books which can be obtained in local book stores, but some, like the Neruda book are done by small publishers without a large distribution system for getting the book out. Whenever this is the case, we will let you know how you can get it. If there is enough pressure put on local stores, they will get books put out by small companies that Ann Arbor residents want to read.