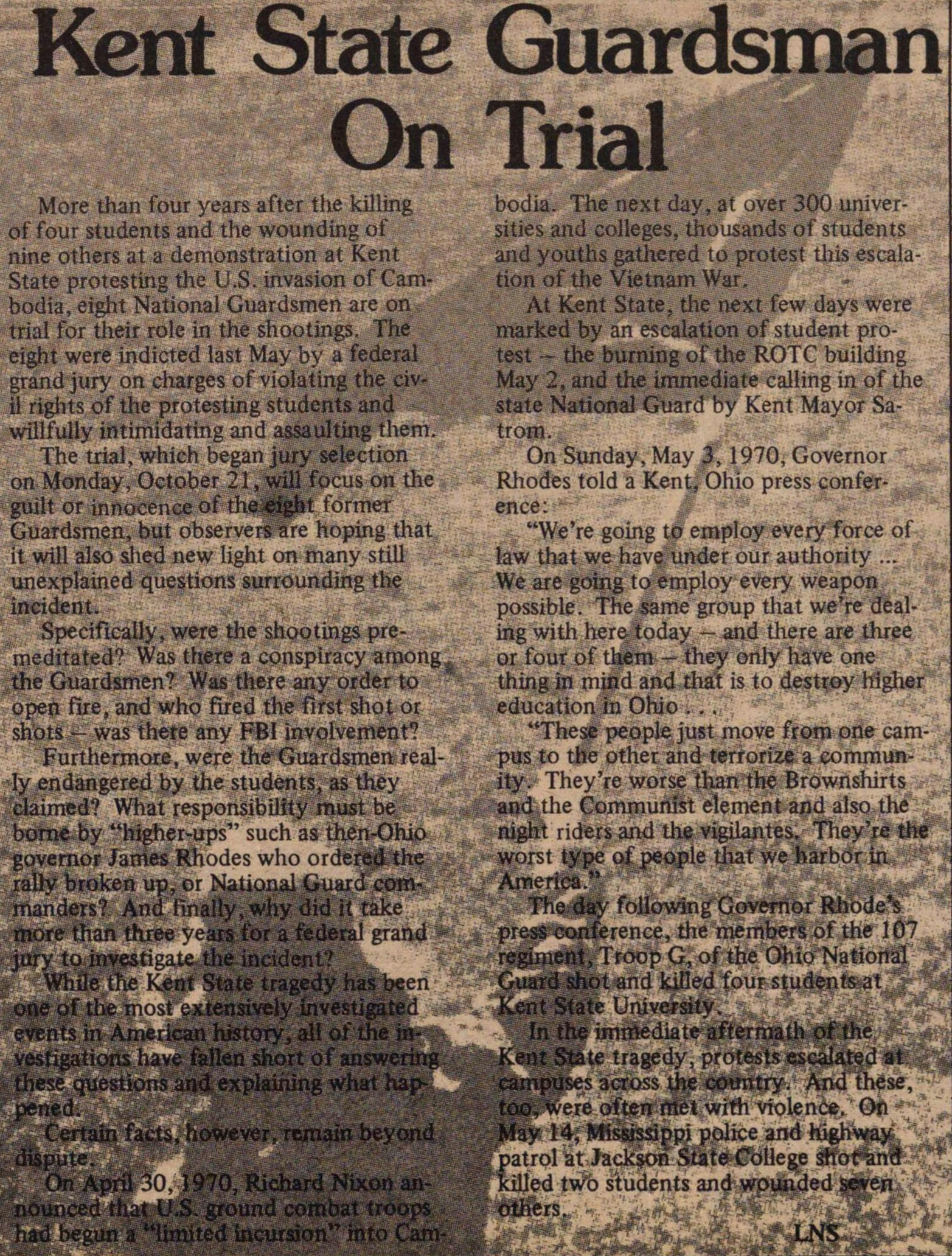 More than four years after the killing of four students and the wounding of nine others at a demonstraron at Kent State protesting the U.S. invasión of Cambodia, eïgiit National Guardsmen are on trial for their role in the shootings. The eight were indicted last May by a federal grand jury on charges of violating the civil rights of the protesting students and willfully intimidating and assa uiting them. The trial, which began jury selection onMonday, October 21,wjll focus on the guilt or innocence of thejÊt former Guardsmen, but observerftre hoping that it will also shed new light on many stül unexplained questions surrounding the incident. Specifically, were the shootings premeditated? Was there a consptracy amongs the Guardsmen? Was there any order to open fire, and who fired the first shot or shots - was thefe any FBI involvement? Furthermore, were the Guardsmen real% ndangered ,by the students, as they claimed? What responsibility must be borne by "higher-ups" such as thenOhio governor Jarries Rhodes who ordëred the rally broken up, or Nation Guard commanders? And finally, why did it take more than three yeais tor a federal grand - jury to investigate Üie incident? Whfle the Kent State tragedy has been olie of the most extensivejy investigsited events in American history, í í investigalions have fallen short of answering hese questions and expiaining what happened. Certain facts, however, remain beyond dispute. Ón April 30, 1 iixon anflOunced that U-S. ground combat troops had begun a "limitecl incursión" in to bodia. The next day, at over 300 universities and colleges, thousands of students and youths gathered to protest tliis escalation of the Vietnam War, At Kent State, the next few days we re marked by an escalation of student protest - the burning of the ROTC building May 2, and the immediate calling in of the state National Gttard by Kent Mayor Satrom. On Sunday, May 3, 1970, Governor Rhodes told a Kent.; Ohio press conference: "We're going tp employ every force of law that we havejunder our authority ... We are going toíímploy every weapon possible. Theiame group that we're dealing with here today - and there are three or four of taem - they only have one thing in mifld and that is to destroy higher education in Ohjo . . . "These people just move from one campus to the other and terrorize a comraunity. They're worse than the Brownshirts and the Communist element and also the night riders and the vigilantes, They're the worst type of-people that we harbör in America." The tóy following Governor Rhöde%" presS' conference, the members of the 1 07 reginient, Troop G, of ttïêöhio "National Giard shot and killed four students at Kent State Univeisity. .Jv : ín the immediate aftermath of the Kent State tragedy, protests escaíated at campases across the cotratry. And these, p&, vvere often met with violence. On May 14, Misassippi pólice and highway jfpatrol at Jackjon State College sftofsnd gkilled two students and wpvuided seven ethers. . .