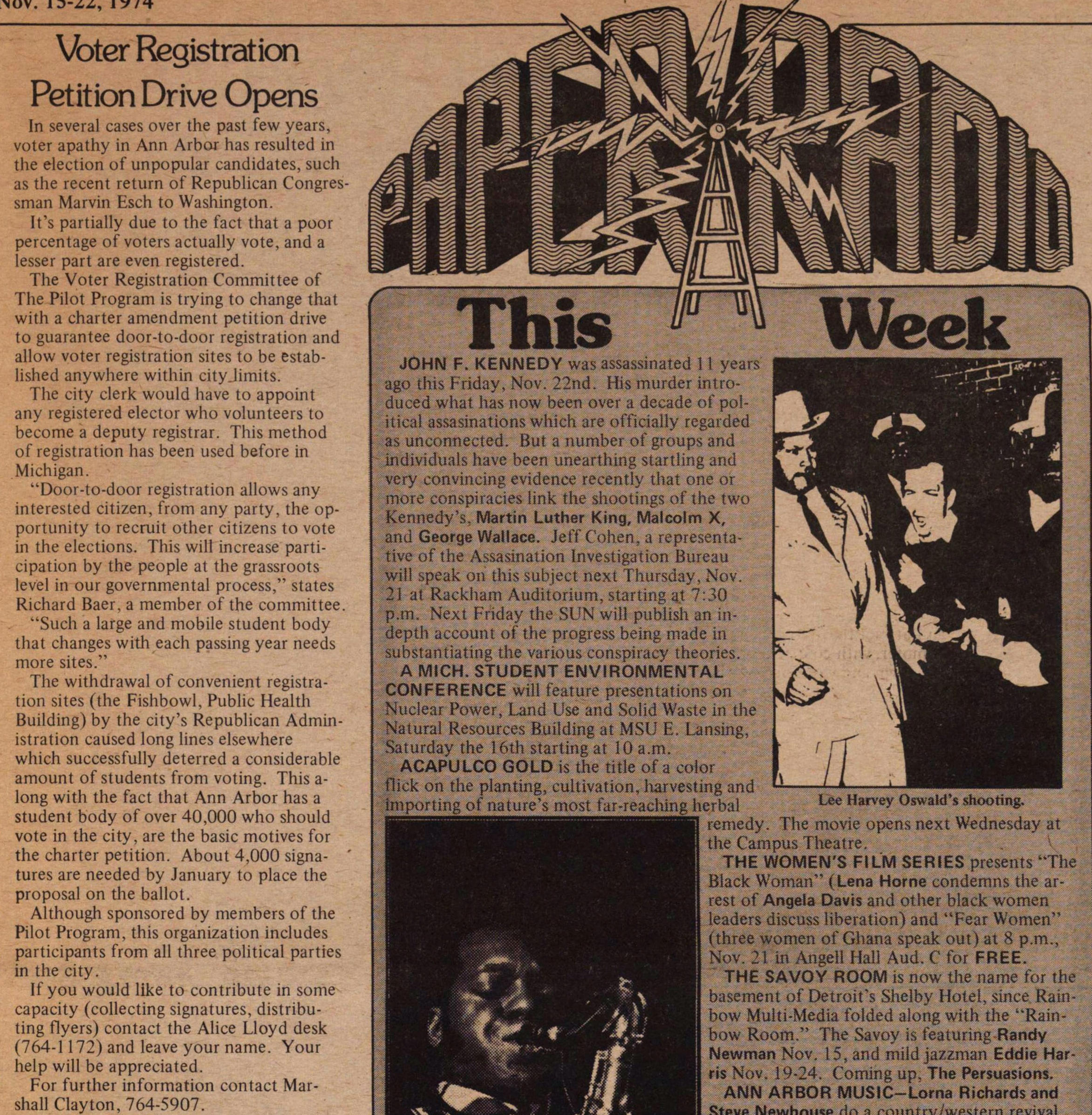 In several cases over the past few years, voter apathy in Ann Arbor has resulted in the election of unpopular candidates, such as the recent return of Republican Congressman Marvin Esch to Washington.

It's partially due to the fact that a poor percentage of voters actually vote, and a lesser part are even registered.

The Voter Registration Committee of The Pilot Program is trying to change that with a charter amendment petition drive to guarantee door-to-door registration and allow voter registration sites to be established anywhere within city limits.

The city clerk would have to appoint any registered elector who volunteers to become a deputy registrar. This method of registration has been used before in Michigan.

"Door-to-door registration allows any interested citizen, from any party, the opportunity to recruit other citizens to vote in the elections. This will increase participation by the people at the grassroots level in our governmental process," states Richard Baer, a member of the committee.

"Such a large and mobile student body that changes with each passing year needs more sites." The withdrawal of convenient registration sites (the Fishbowl, Public Health Building) by the city's Republican Administration caused long lines elsewhere which successfully deterred a considerable amount of students from voting. This along with the fact that Ann Arbor has a student body of over 40,000 who should vote in the city, are the basic motives for the charter petition. About 4,000 signatures are needed by January to place the proposal on the ballot.

Although sponsored by members of the Pilot Program, this organization includes participants from all three political parties in the city.

If you would like to contribute in some capacity (collecting signatures, distributing flyers) contact the Alice Lloyd desk (764-1172) and leave your name. Your help will be appreciated. For further information contact Marshall Clayton, 764-5907.

John F. Kennedy was assassinated 11 years ago this Friday, Nov. 22. His murder introduced what has now been over a decade of political assassinations which are officially regarded as as unconnected. But a number of groups and individuals have been unearthing startling and very convincing evidence recently that one or more conspiracies link the shootings of the two Kennedy's, Martin Luther King, Malcolm X, and George Wallace. Jeff Cohen, a representative of the Assassination Investigation Bureau will speak on this subject next Thursday, Nov. 21 at Rackham Auditorium, starting at 7:30pm. Next Friday the SUN will publish an in-depth account of the progress being made in substantiating the various conspiracy theories.

A MICH. STUDENT ENVIRONMENTAL CONFERENCE will feature presentations on Nuclear Power, Land Use and Solid Waste in the Natural Resources Building and MSU E. Lansing, Saturday the 16th starting at 10 a.m.

ACAPULCO GOLD is the title of a color flick on the planting, cultivation, harvesting and importing of nature's most far-fetched herbal remedy. The movie opens next Wednesday at the Campus Theatre.

THE SAVOY ROOM is now the name for the basement of Detroit's Shelby Hotel, since Rainbow Multi-Media folded along with the "Rainbow Room." The Savoy is featuring Randy Newman Nov. 15, and mild jazzman Eddie Harris Nov. 19-24. Coming up, The Persuasions.