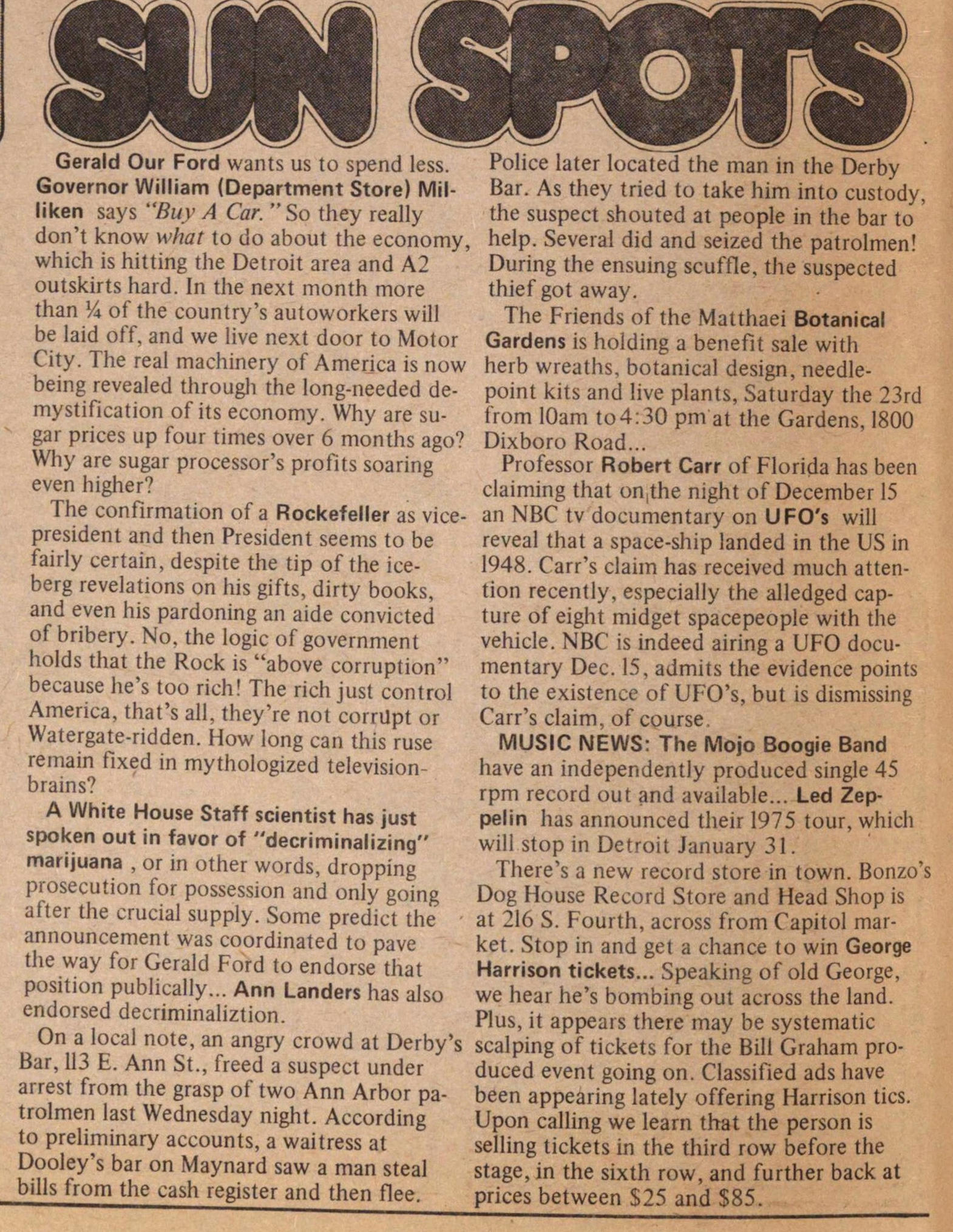 Gerald Our Ford wants us to spend less. Governor William (Department Store) Milliken says "Buy A Car. " So they really don't know what to do about the economy, which is hitting the Detroit area and A2 outskirts hard. In the next month more than 3/4 of the country's autoworkers will be laid off, and we live next door to Motor City. The real machinery of America is now being revealed through the long-needed demystifïcation of its economy. Why are sugar prices up four times over 6 months ago? Why are sugar processor's profits soaring even higher?

The confirmation of a Rockefeller as vice-president and then President seems to be fairly certain, despite the tip of the iceberg revelations on his gifts, dirty books, and even his pardoning an aide convicted of bribery. No, the logic of government holds that the Rock is "above corruption" because he's too rich! The rich just control America, that's all, they're not corrupt or Watergate-ridden. How long can this ruse remain fixed in mythologized television-brains?

A White House Staff scientist has just spoken out in favor of "decriminalizing" marijuana , or in other words, dropping prosecution for possession and only going after the crucial supply. Some predict the announcement was coordinated to pave the way for Gerald Ford to endorse that position publicly... Ann Landers has also endorsed decriminalization.

On a local note, an angry crowd at Derby's Bar, 113 E. Ann St., freed a suspect under arrest from the grasp of two Ann Arbor patrolmen last Wednesday night. According to preliminary accounts, a waitress at Dooley's bar on Maynard saw a man steal bills from the cash register and then flee. Police later located the man in the Derby Bar. As they tried to take him into custody, the suspect shouted at people in the bar to help. Several did and seized the patrolmen! During the ensuing scuffle, the suspected thief got away.

The Friends of the Matthaei Botanical Gardens is holding a benefit sale with herb wreaths, botanical design, needlepoint kits and live plants, Saturday the 23rd from 10am to 4:30 pm at the Gardens, 1800 Dixboro Road...

Professor Robert Carr of Florida has been claiming that on the night of December 15 an NBC tv documentary on UFO's will reveal that a space-ship landed in the US in 1948. Carr's claim has received much attention recently, especially the alleged capture of eight midget space-people with the vehicle. NBC is indeed airing a UFO documentary Dec. 15, admits the evidence points to the existence of UFO's, but is dismissing Carr's claim, of course.

MUSIC NEWS: The Mojo Boogie Band have an independently produced single 45 rpm record out and available... Led Zeppelin has announced their 1975 tour, which will stop in Detroit January 31 .

There's a new record store in town. Bonzo's Dog House Record Store and Head Shop is at 216 S. Fourth, across from Capitol market. Stop in and get a chance to win George Harrison tickets... Speaking of old George, we hear he's bombing out across the land. Plus, it appears there may be systematic scalping of tickets for the Bill Graham produced event going on. Classified ads have been appearing lately offering Harrison tics. Upon calling we learn that the person is selling tickets in the third row before the stage, in the sixth row, and further back at prices between $25 and $85.