The Battle Of Dexter 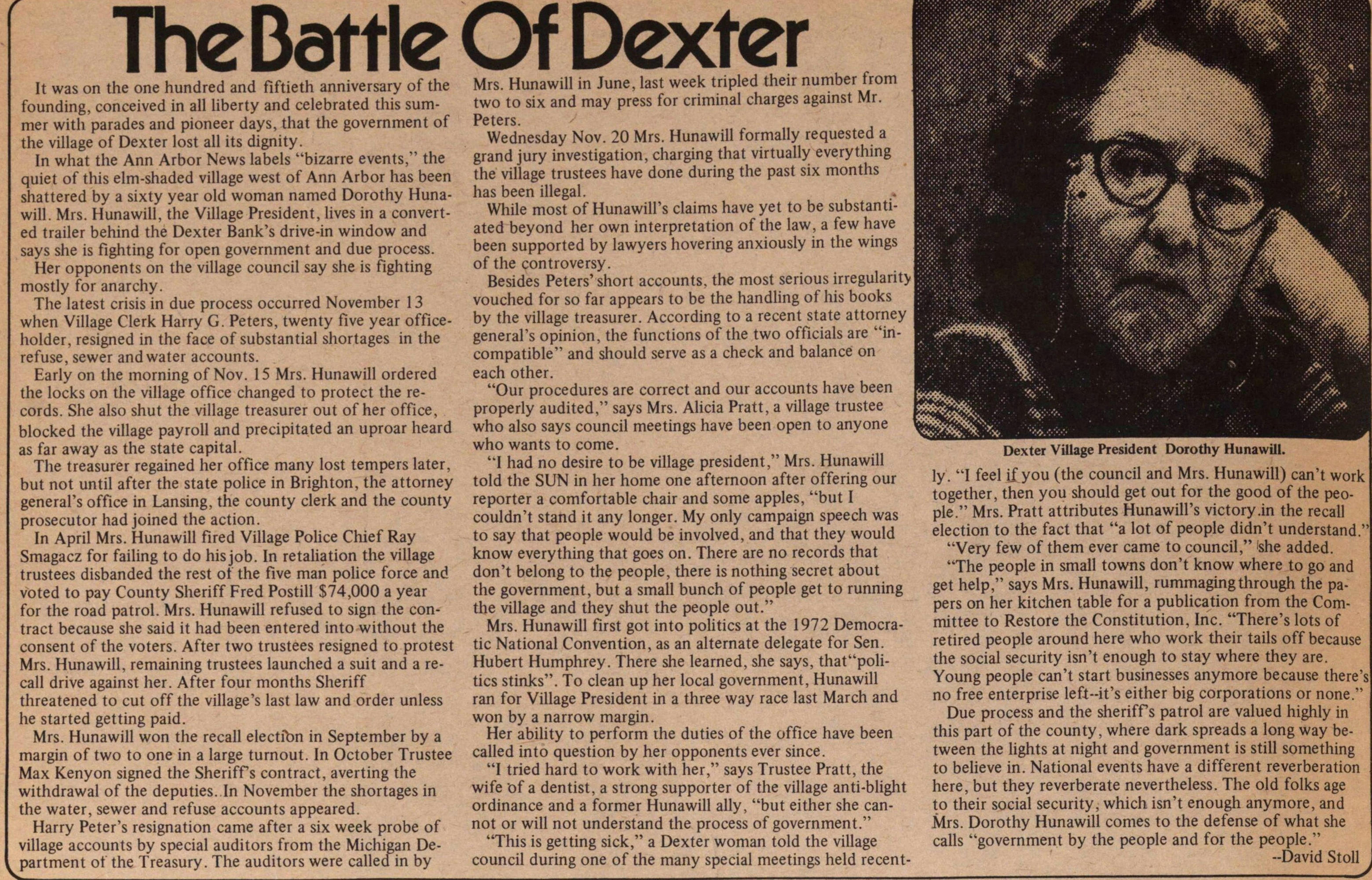 It was on the one hundred and fiftieth anniversary of the founding, conceived in all liberty and celebrated this summer with parades and pioneer days, that the government of the village of Dexter lost all its dignity.

In what the Ann Arbor News labels "bizarre events," the quiet of this elm-shaded village west of Ann Arbor has been shattered by a sixty year old woman named Dorothy Hunawill. Mrs. Hunawill, the Village President, lives in a converted trailer behind the Dexter Bank's drive-in window and says she is fighting for open government and due process.

Her opponents on the village council say she is fighting mostly for anarchy.

The latest crisis in due process occurred November 13 when Village Clerk Harry G. Peters, twenty five year officeholder, resigned in the face of substantial shortages in the refuse, sewer and water accounts.

Early on the morning of Nov. 15 Mrs. Hunawill ordered the locks on the village office changed to protect the records. She also shut the village treasurer out of her office, blocked the village payroll and precipitated an uproar heard as far away as the state capital.

The treasurer regained her office many lost tempers later, but not until after the state police in Brighton, the attorney general's office in Lansing, the county clerk and the county prosecutor had joined the action.

In April Mrs. Hunawill fired Village Police Chief Ray Smagacz for failing to do his job. In retaliation the village trustees disbanded the rest of the five man police force and voted to pay County Sheriff Fred Postill $74,000 a year for the road patrol. Mrs. Hunawill refused to sign the contract because she said it had been entered into without the consent of the voters. After two trustees resigned to protest Mrs. Hunawill, remaining trustees launched a suit and a recall drive against her. After four months Sheriff threatened to cut off the village 's last law and order unless he started getting paid.

Mrs. Hunawill won the recall election in September by a margin of two to one in a large turnout. In October Trustee Max Kenyon signed the Sheriff s contract, averting the withdrawal of the deputies. In November the shortages in the water, sewer and refuse accounts appeared.

Harry Peter's resignation came after a six week probe of village accounts by special auditors from the Michigan Department of the Treasury. The auditors were called in by Mrs. Hunawill in June, last week tripled their number from two to six and may press for criminal charges against Mr. Peters.

Wednesday Nov. 20 Mrs. Hunawill formally requested a grand jury investigation, charging that virtually everything the village trustees have done during the past six months has been illegal.

While most of Hunawill's claims have yet to be substantiated beyond her own interpretation of the law, a few have been supported by lawyers hovering anxiously in the wings of the controversy.

Besides Peters' short accounts, the most serious irregularity vouched for so far appears to be the handling of his books by the village treasurer. According to a recent state attorney general's opinion, the functions of the two officials are "incompatible" and should serve as a check and balance on each other.

"Our procedures are correct and our accounts have been properly audited," says Mrs. Alicia Pratt, a village trustee who also says council meetings have been open to anyone who wants to come. '"I had no desire to be village president," Mrs. Hunawill told the SUN in her home one afternoon after offering our reporter a comfortable chair and some apples, "but I couldn't stand it any longer. My only campaign speech was to say that people would be involved, and that they would know everything that goes on. There are no records that don't belong to the people, there is nothing secret about the government, but a small bunch of people get to running the village and they shut the people out."

Mrs. Hunawill first got into politics at the 1972 Democratic National Convention, as an alternate delegate for Sen. Hubert Humphrey. There she learned, she says, that politics stinks". To clean up her local government, Hunawill ran for Village President in a three way race last March and won by a narrow margin.

Her ability to perform the duties of the office have been called into question by her opponents ever since.

"I tried hard to work with her," says Trustee Pratt, the wife of a dentist, a strong supporter of the village anti-blight ordinance and a former Hunawill ally, "but either she cannot or will not understand the process of government."

"This is getting sick," a Dexter woman told the village council during one of the many special meetings held recently.

"I feel if you (the council and Mrs. Hunawill) can't work together, then you should get out for the good of the people." Mrs. Pratt attributes Hunawill's victory in the recall election to the fact that "a lot of people didn't understand."

"Very few of them ever came to council," she added.

"The people in small towns don't know where to go and get help," says Mrs. Hunawill, rummaging through the papers on her kitchen table for a publication from the Committee to Restore the Constitution, Inc. "There's lots of retired people around here who work their tails off because the social security isn't enough to stay where they are. Young people can't start businesses anymore because there's no free enterprise left-it's either big corporations or none."

Due process and the sheriff’s patrol are valued highly in this part of the county, where dark spreads a long way between the lights at night and government is still something to believe in. National events have a different reverberation here, but they reverberate nevertheless. The old folks age to their social security, which isn't enough anymore, and Mrs. Dorothy Hunawill comes to the defense of what she calls "government by the people and for the people."