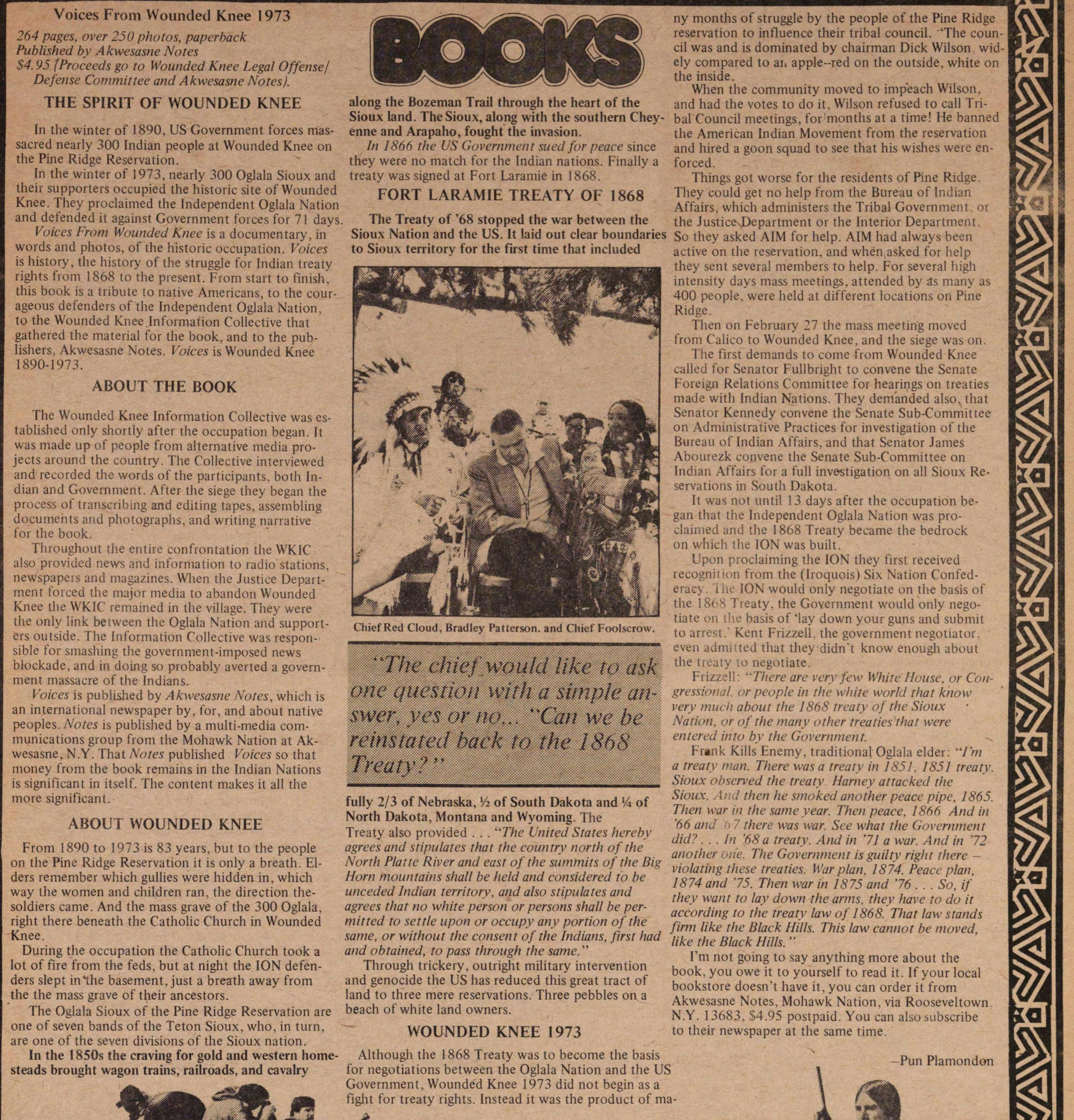 THE SPIRIT OF WOUNDED KNEE

In the winter of 1890, US Government forces massacred nearly 300 Indian people at Wounded Knee on the Pine Ridge Reservation.

In the winter of 1973, nearly 300 Oglala Sioux and their supporters occupied the historic site of Wounded Knee. They proclaimed the Independent Oglala Nation and defended it against Government forces for 71 days.

Voices From Wounded Knee is a documentary, in words and photos, of the historic occupation. Voices is history, the history of the struggle for Indian treaty rights from 1868 to the present. From start to finish, this book is a tribute to native Americans, to the courageous defenders of the Independent Oglala Nation, to the Wounded Knee Information Collective that gathered the material for the book, and to the publishers, Akwesasne Notes. Voices is Wounded Knee 1890-1973.

The Wounded Knee Information Collective was established only shortly after the occupation began. It was made up of people from alternative media projects around the country. The Collective interviewed and recorded the words of the participants, both Indian and Government. After the siege they began the process of transcribing and editing tapes, assembling documents and photographs, and writing narrative for the book.

Throughout the entire confrontation the WKIC also provided news and information to radio stations, newspapers and magazines. When the Justice Department forced the major media to abandon Wounded Knee the WKIC remained in the village. They were the only link between the Oglala Nation and supporters outside. The Information Collective was responsible for smashing the government-imposed news I blockade, and in doing so probably averted a government massacre of the Indians.

Voices is published by Akwesasne Notes, which is an international newspaper by, for, and about native peoples. Notes is published by a multi-media communications group from the Mohawk Nation at Akwesasne, N.Y. That Notes published Voices so that money from the book remains in the Indian Nations is significant in itself. The content makes it all the more significant.

From 1890 to 1973 is 83 years, but to the people on the Pine Ridge Reservation it is only a breath. Elders remember which gullies were hidden in, which way the women and children ran, the direction the soldiers carne. And the mass grave of the 300 Oglala, right there beneath the Catholic Church in Wounded Knee.

During the occupation the Catholic Church took a lot of fire from the feds, but at night the ION defenders slept in the basement, just a breath away from the the mass grave of their ancestors.

The Oglala Sioux of the Pine Ridge Reservation are one of seven bands of the Teton Sioux, who, in turn, are one of the seven divisions of the Sioux nation.

In the 1850s the craving for gold and western homesteads brought wagon trains, railroads, and cavalry along the Bozeman Trail through the heart of the Sioux land. TheSioux, along with the southern Cheyenne and Arapaho, fought the invasion.

In 1866 the US Government sued for peace since they were no match for the Indian nations. Finally a treaty was signed at Fort Laramie in 1868.

The Treaty of '68 stopped the war between the Sioux Nation and the US. It laid out clear boundaries to Sioux territory for the first time that included fully 2/3 of Nebraska, 1/2 of South Dakota and 1/4 of North Dakota, Montana and Wyoming. The Treaty also provided . . . "The United States hereby agrees and stipulates that the country north of the North Platte River and east of the summits of the Big Horn mountains shall be held and considered to be unceded Indian territory, and also stipulates and agrees that no white person or persons shall be permitted to settle upon or occupy any portion of the same, or without the consent of the Indians, first had and obtained, to pass through the same."

Through trickery, outright military intervention and genocide the US has reduced this great tract of land to three mere reservations. Three pebbles on a beach of white land owners.

Although the 1868 Treaty was to become the basis for negotiations between the Oglala Nation and the US Government, Wounded Knee 1973 did not begin as a fight for treaty rights. Instead it was the product of many months of struggle by the people of the Pine Ridge reservation to influence their tribal council. 'The council was and is dominated by chairman Dick Wilson widely compared to an apple--red on the outside, white on the inside.

When the community moved to impeach Wilson, and had the votes to do it, Wilson refused to cali Tribal Council meetings, for months at a time! He banned the American Indian Movement from the reservation and hired a goon squad to see that his wishes were enforced.

Things got worse for the residents of Pine Ridge. They could get no help from the Bureau of Indian Affairs, which administers the Tribal Government, or the Justice Department or the Interior Department. So they asked AIM for help. AIM had always been active on the reservation, and when asked for help they sent several members to help. For several high intensity days mass meetings, attended by as many as 400 people, were held at different locations on Pine Ridge.

Then on February 27 the mass meeting moved from Calico to Wounded Knee. and the siege was on.

It was not until 13 days after the occupation began that the Independent Oglala Nation was proclaimed and the 1868 Treaty became the bedrock on which the ION was built.

Frizzell: "There are very few White House, or Congressional, or people in the white world that know very much about the 1868 treaty of the Sioux Nation, or of the many other treaties that were entered into by the Government.

I'm not going to say anything more about the book, you owe it to yourself to read it. If your local bookstore doesn't have it, you can order it from Akwesasne Notes, Mohawk Nation, via Rooseveltown, N.Y. 13683, $4.95 postpaid. You can also subscribe to their newspaper at the same time.