The Assassination of John F. Kennedy: Uncovering the Cover-Up 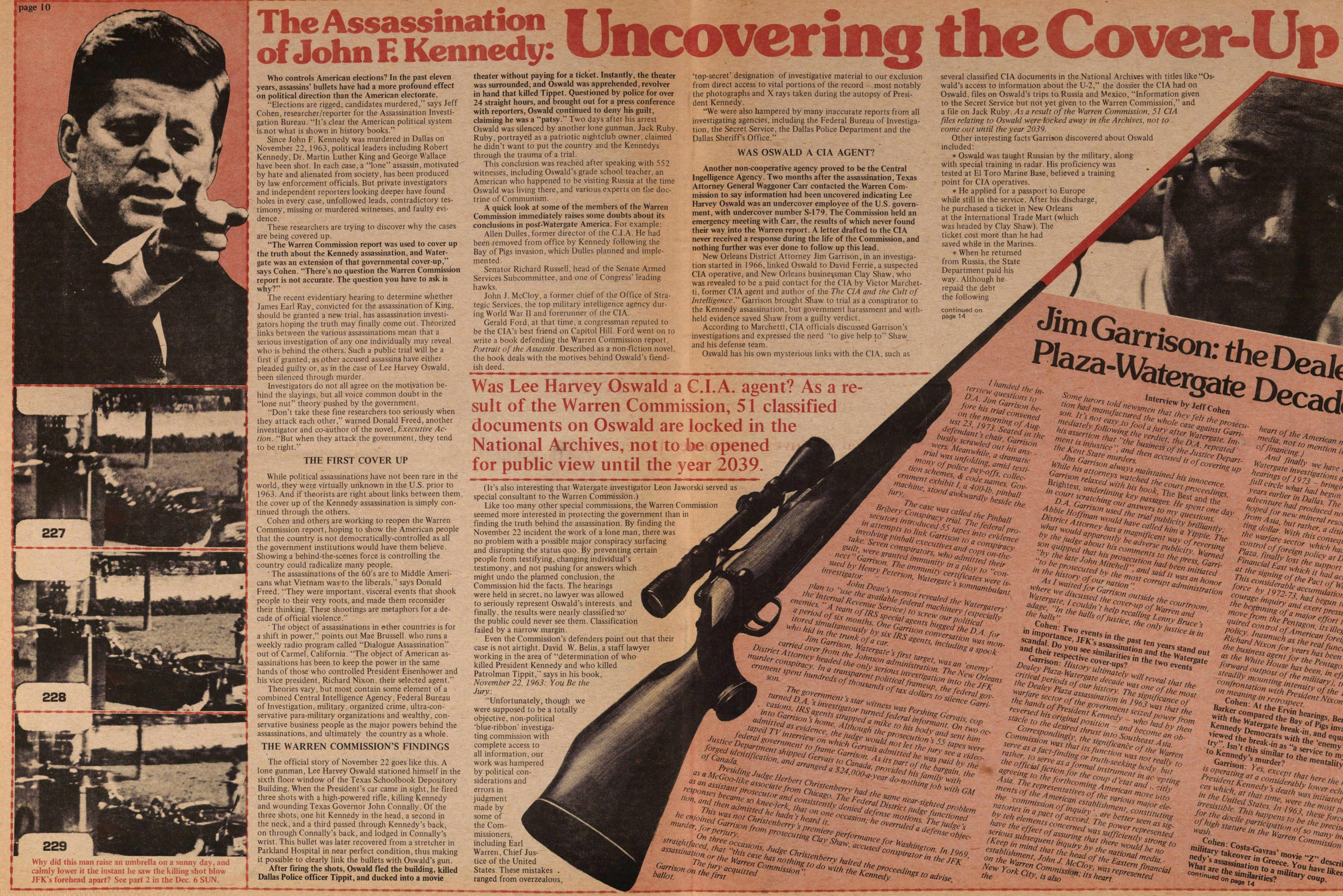 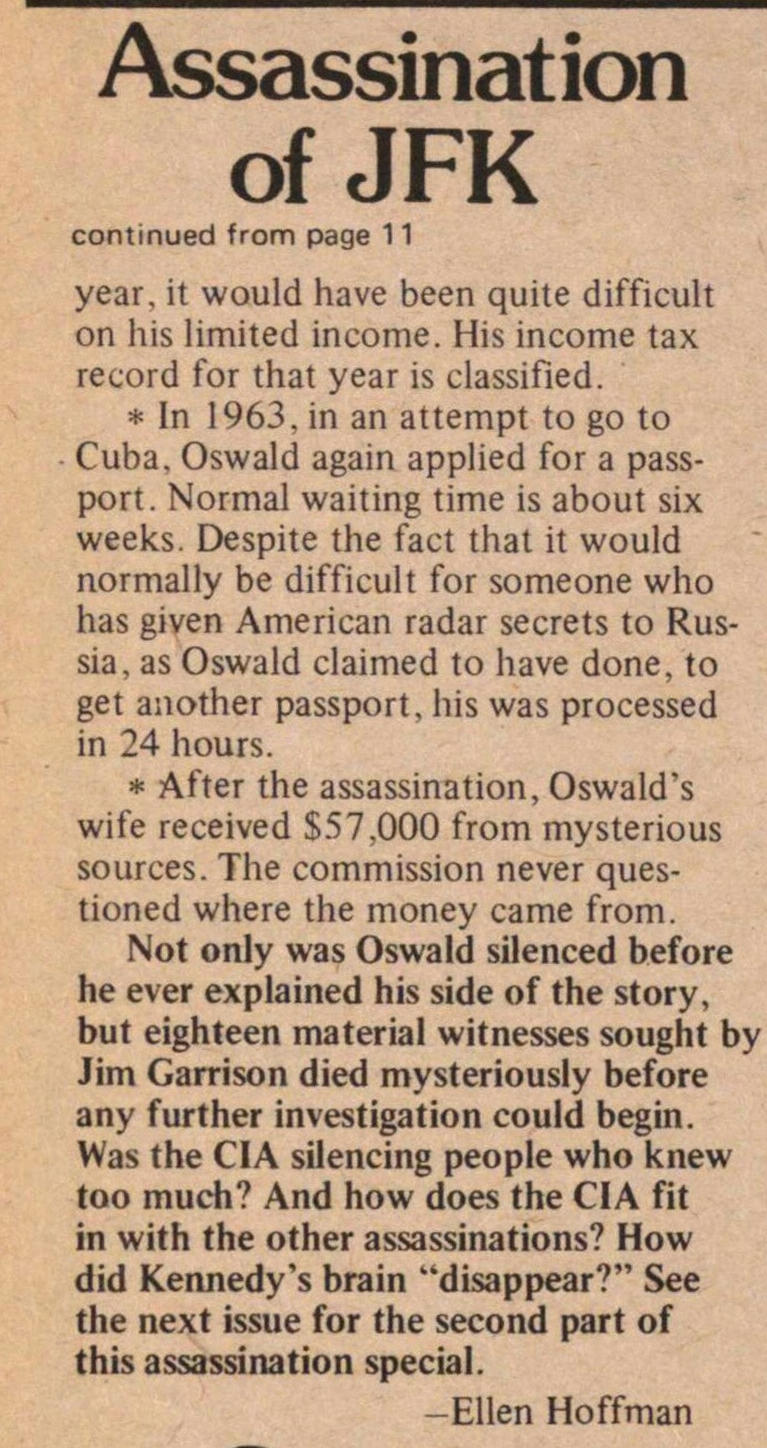 Who controls American elections? In the past eleven years, assassins' bullets have had a more profound effect on political direction than the American electorate.

"Elections are rigged, candidates murdered," says Jeff Cohen, researcher/reporter for the Assassination Investigation Bureau. "It's clear the American political system is not what is shown in history books."

Since John F. Kennedy was murdered in Dallas on November 22, 1963, political leaders including Robert Kennedy, Dr. Martin Luther King and George Wallace have been shot. In each case, a "lone" assassin, motivated by hate and alienated from society, has been produced by law enforcement officials. But private investigators and independent reporters looking deeper have found holes in every case, unfollowed leads, contradictory testimony, missing or murdered witnesses, and faulty evidence.

These researchers are trying to discover why the cases are being covered up.

The recent evidentiary hearing to determine whether James Earl Ray, convicted for the assassination of King, should be granted a new trial, has assassination investigators hoping the truth may finally come out. Theorized links between the various assassinations mean that a serious investigation of any one individually may reveal who is behind the others. Such a public trial will be a first if granted, as other accused assassins have either pleaded guilty or, as in the case of Lee Harvey Oswald, been silenced through murder.

Investigators do not all agree on the motivation behind the slayings, but all voice common doubt in the "lone nut" theory pushed by the government.

"Don't take these fine researchers too seriously when they attack each other," warned Donald Freed, another investigator and co-author of the novel, Executive Action. "But when they attack the government, they tend to be right."

THE FIRST COVER UP

White political assassinations have not been rare in the world, they were virtually unknown in the U.S. prior to 1963. And if theorists are right about links between them, the cover up of the Kennedy assassination is simply continued through the others.

Cohen and others are working to reopen the Warren Commission report, hoping to show the American people that the country is not democratically-controlled as all the government institutions would have them believe. Showing a behind-the-scenes force is controlling the country could radicalize many people. '

The assassinations of the 60's are to Middle Americans what Vietnam was to the liberals,' says Donald Freed. "They were important, visceral events that shook people to their very roots, and made them reconsider their thinking. These shootings are metaphors for a decade of official violence."

The object of assassinations in other countries is for a shift in power," points out Mae Brussell who runs a weekly radio program called "Dialogue Assassination" out of Carmel, California. "The object of American assassinations has been to keep the power in the same hands of those who controlled President Eisenhower and his vice president, Richard Nixon, their selected agent."

Theories vary, but most contain some element of a combined Central Intelligence Agency, Federal Bureau of Investigation, military, organized crime, ultra-conservative para-military organizations and wealthy, conservative business people as the major powers behind the assassinations, and ultimately the country as a whole.

The official story of November 22 goes like this. A lone gunman, Lee Harvey Oswald stationed himself in the sixth floor window of the Texas Schoolbook Depository Building. When the President's car carne in sight, he fired three shots with a high-powered rifle, killing Kennedy and wounding Texas Governor John Connally. Of the three shots, one hit Kennedy in the head, a second in the neck, and a third passed through Kennedy's back, on through Connally's back, and lodged in Connally's wrist. This bullet was later recovered from a stretcher in Parkland Hospital in near perfect condition, thus making it possible to clearly link the bullets with Oswald's gun.

After firing the shots, Oswald fled the building, killed Dallas Police officer Tippit, and ducked into a movie theater without paying for a ticket. Instantly, the theater was surrounded, and Oswald was apprehended, revolver in hand that killed Tippet. Questioned by police for over 24 straight hours, and brought out for a press conference with reporters, Oswald continued to deny his guilt, claiming he was a "patsy." Two days after his arrest Oswald was silenced by another lone gunman Jack Ruby. Ruby, portrayed as a patriotic nightclub owner, claimed he didn't want to put the country and the Kennedys through the trauma of a trial.

This conclusion was reached after speaking with 552 witnesses, including Oswald's grade school teacher, an American who happened to be visiting Russia at the time Oswald was living there, and various experts on the doctrine of Communism.

A quick look at some of the members of the Warren Commission immediately raises some doubts about its conclusions in post-Watergate America. For example:

Allen Dulles, former director of the C.I.A. He had been removed from office by Kennedy following the Bay of Pigs invasion, which Dulles planned and implemented.

Senator Richard Russell, head of the Senate Armed Services Subcommittee, and one of Congress' leading hawks.

John J. McCloy. a former chief of the Office of Strategic Services, the top military intelligence agency during World War II and forerunner of the CIA.

Gerald Ford, at that time, a congressman reputed to be the CIA's best friend on Capitol Hill. Ford went on to write a book defending the Warren Commission report, Portrait of the Assassin. Described as a non-fiction novel, the book deals with the motives behind Oswald's fiendish deed.

(It's also interesting that Watergate investigator Leon Jaworski served as special consultant to the Warren Commission.)

Like too many other special commissions, the Warren Commission seemed more interested in protecting the government than in finding the truth behind the assassination. By finding the November 22 incident the work of a lone man, there was no problem with a possible major conspiracy surfacing and disrupting the status quo. By preventing certain people from testifying, changing individual's testimony, and not pushing for answers which might undo the planned conclusion, the Commission hid the facts. The hearings were held in secret, no lawyer was allowed to seriously represent Oswald's interests and finally, the results were nearly classified so the public could never see them. Classification failed by a narrow margin.

Even the Commission's defenders point out that their case is not airtight. David W. Belin, a staff lawyer working in the area of "determination of who killed President Kennedy and who killed Patrolman Tippit," says in his book, November 22, 1963: You Be the Jury:

"Unfortunately, though we were supposed to be a totally objective, non-political "blue-ribbon" investigating commission with complete access to all information, our work was hampered by political considerations and errors in judgment made by some of the Commissioners, including Earl Warren, Chief Justice of the United States. These mistakes ranged from overzealous, 'top-secret' designation of investigative material to our exclusion from direct access to vital portions of the record - most notably the photographs and X rays taken during the autopsy of President Kennedy.

"We were also hampered by many inaccurate reports from all investigating agencies, including the Federal Bureau of Investigation, the Secret Service, the Dallas Police Department and the Dallas Sheriff s Office."

WAS OSWALD A CIA AGENT?

Another non-cooperative agency proved to be the Central Ingelligence Agency. Two months after the assassination, Texas Attorney General Waggoner Carr contacted the Warren Commission to say information had been uncovered indicating Lee Harvey Oswald was an undercover employee of the U.S. government, with undercover number S-179. The Commission held an emergency meeting with Carr, the results of which never found their way into the Warren report. A letter drafted to the CIA never received a response during the life of the Commission, and nothing further was ever done to follow up this lead.

New Orleans District Attorney Jim Garrison, in an investigation started in 1966, linked Oswald to David Ferrie, a suspected CIA operative, and New Orleans businessman Clay Shaw, who was revealed to be a paid contact for the CIA by Victor Marchetti, former CIA agent and author of the The CIA and the Cult of
Intelligence.
" Garrison brought Shaw to trial as a conspirator to the Kennedy assassination, but government harassment and withheld evidence saved Shaw from a guilty verdict.

According to Marchetti, CIA officials discussed Garrison's investigations and expressed the need 'to give help to" Shaw and his defense team.

Oswald has his own mysterious links with the CIA, such as several classified CIA documents in the National Archives with titles like "Oswald's access to information about the U-2," the dossier the CIA had on Oswald, files on Oswald's trips to Russia and Mexico, "Information given to the Secret Service but not yet given to the Warren Commission," and a file on Jack Ruby. As a result of the Warren Commission, 51 CIA files relating to Oswald were locked away in the Archives, not to come out until the year 2039.

Not only was Oswald silenced before he explained his side of the story, but eighteen material witnesses sought by Jim Garrison dies mysteriously before any further investigation could begin. Was the CIA silencing people who knew too much? And how does the CIA fit in with the other assassinations? How did Kennedy's brain "disappear?" See the next issue for the second part of the assassination special.