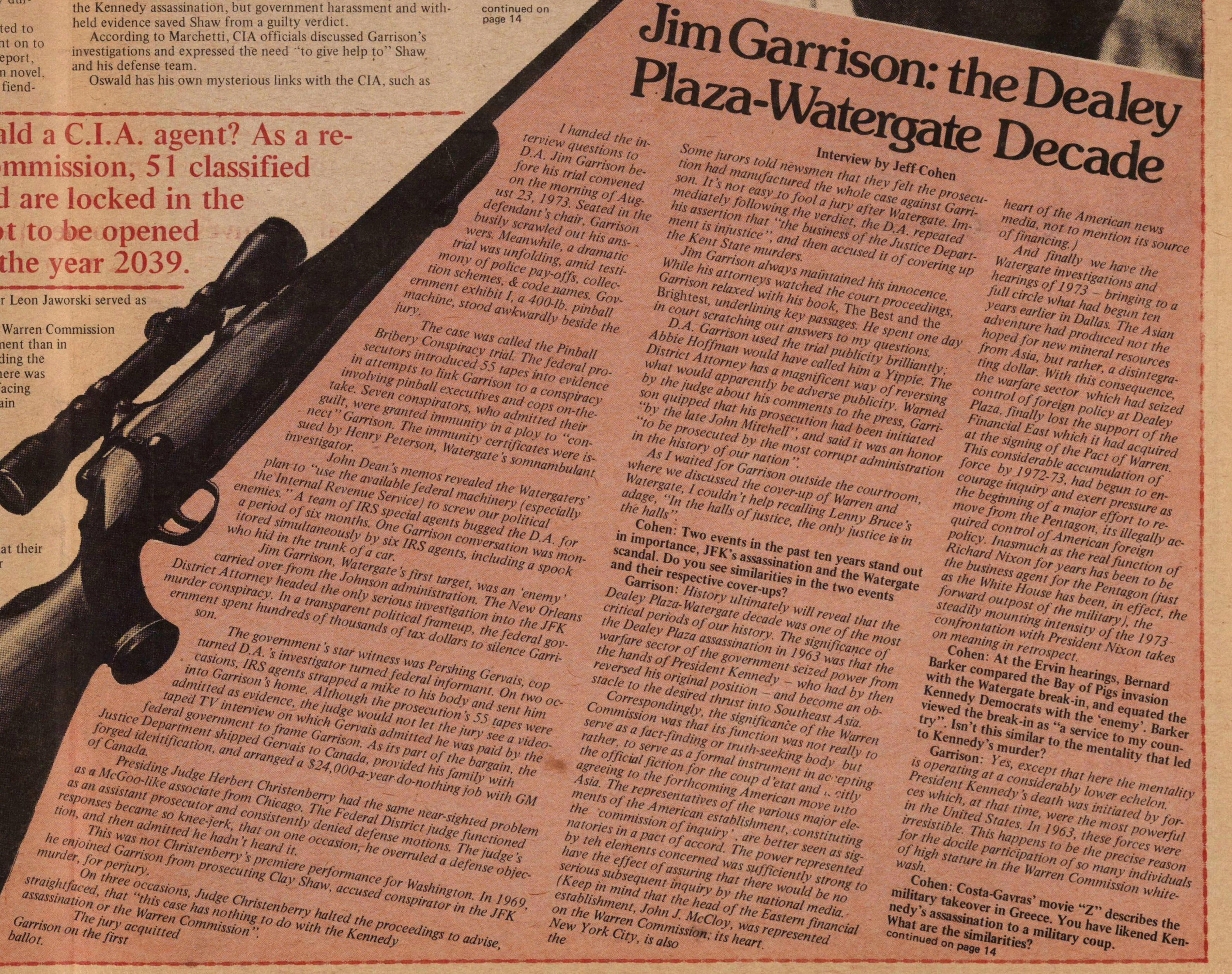 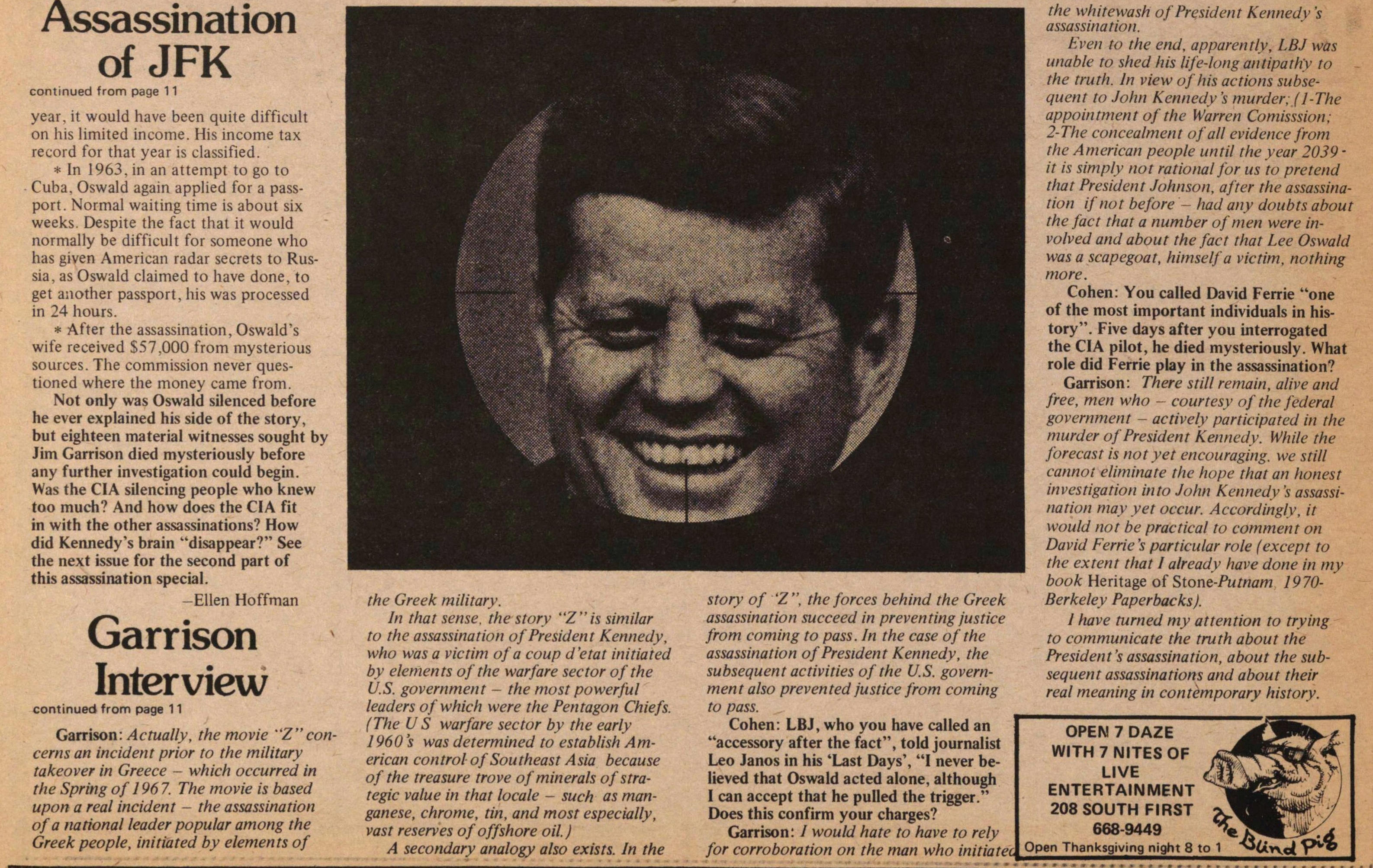 I handed the interview questions to the D.A. Jim Garrison before his trial convened on the morning of August 23, 1973.  Seated in the defendant's, chair, Garrison busily scrawled out his answers. Meanwhile, a dramatic trial was unfolding, amid testimony of police pay-offs, collection schemes, & code names. Government exhibit 1, a 400-lb. pinball machine, stood awkwardly beside the jury.

The case was called the Pinball Bribery Conspiracy trial. The federal prosecutors introduced 55 tapes into evidence in attempts to link Garrison to a conspiracy involving pinball executives and cops-on-the-take. Seven conspirators, who admitted their guilt, were granted immunity in a ploy to "connect" Garrison. The immunity certificates were issued by Henry Peterson,  Watergate's somnambulant investigator.

John Dean's memos revealed the Watergaters' plan to "use the available federal machinery (especially the Internal Revenue Service) to screw our political enemies." A team of IRS special agents bugged the D.A. for a period of six months. One Garrison conversation was monitored simultaneously by six IRS agents, including a spook who hid the trunk of a car.

Jim Garrison, Watergate's first target, was an 'enemy' carried over from the Johnson administration. The New Orleans District Attorney headed the only serious investigation in the JFK murder conspiracy. In a transparent political frameup, the federal government spent hundreds of thousands of tax dollars to silence Garrison.

The Government's star witness was Pershing Gervais, cop turned D.A.'s investigator turned federal informant. On two occasions, IRS Agents strapped a mike to his body and sent him into Garrison's home. Although the prosecution's 55 tapes were admitted as evidence, the judge would not let the jury see a videotaped TV interview on which Gervais admitted he was paid by the federal government to frame Garrison. As part pf the bargain, the Justice Department shipped Gervais to Canada, provided his family with forged identification, and arranged a $24,000-a-year-do-nothing job with GM of Canada.

Presiding Judge Herbert Christenberry had the near-sighted problem as a McGoo-like associate from Chicago. The Federal District judge functioned as an assistant prosecutor and consistently denied defense motions. The judge's responses became so knee-jerk, that on one occasion, he overruled a defense objection, and then admitted he hadn't heard it.

This was not Christenberry's premiere performance for Washington. In 1969,  he enjoined Garrison from prosecuting Clay Shaw, accused conspirator in the JFK murder, for perjury.

On three occasions, Judge Christenberry halted the proceedings to advise, straightfaced, that "this case has nothing to do with the Kennedy assassination or the Warren Commission".

The jury acquitted Garrison on the first ballot.

Some Jurors told newsmen that they felt the prosecution had manufactured the whole case against Garrison. It's not easy to fool a jury after Watergate. Immediately following the verdict, the D.A. repeated his assertion that "the business of the Justice Department is injustice", and then accused it of covering up the Kent State murders.

Jim Garrison always maintained his innocence. While his attorneys watched the court proceedings, Garrison relaxed with his book, The Best and the Brightest, underlining key passages. He spent one day in court scratching out answers to my questions.

D.A. Garrison used the trial publicity brilliantly; Abbie Hoffman would have called him a Yippie.  The District Attorney has a magnificent way of reversing what would apparently be adverse publicity.  Warned by the judge about his comments to the press, Garrison quipped that his prosecution had been initiated "by the late John Mitchell", and said it was an honor "to be prosecuted by the most corrupt administration in the history of our nation".

As I waited for Garrison outside the courtroom, where we discussed the cover-up of Warren and Watergate, I couldn't help recalling Lenny Bruce's adage, "In the halls of justice, the only justice is in the halls".

Cohen: Two events in the past ten years stand out in importance, JFK's assassination and the Watergate scandal. Do you see similarities in the two events and their respective cover-ups?

Garrison: History ultimately will reveal that the Dealey Plaza-Watergate decade was one of the most critical periods of our history. The significance of the Dealey Plaza assassination in 1963 was that the warfare sector of the government seized power from the hands of President Kennedy - who had by then reversed his original position - and become an obstacle to the desired thrust into Southeast Asia.

Correspondingly, the significance of the Warren Commission was that its function was not really to serve as a fact-finding or truth-seeking body but rather, to serve as a formal instrument in accepting the official fiction for the coup d'etat and eitly agreeing to the forthcoming American move into Asia. The representatives of the various major elements of the American establishment, constituting the 'commission of inquiry' , are better seen as signatories in a pact of accord. The power represented by teh elements concerned was sufficiently strong to have the effect of assuring that there would be no serious subsequent inquiry by the national media. (Keep in mind that the head of the Eastern financial establishment, John J. McCloy, was represented on the Warren Commission; its heat. New York City, is also the heart of the American news media, not to mention its source of financing.)

And finally we have the Watergate investigations and hearings of 1973 - bringing to a full circle what had begun ten years earlier in Dallas. The. Asian adventure had produced not the hoped for new mineral resources from Asia, but rather a disintegrating dollar. With this consequence, the warfare sector which had seized control of foreign policy at Dealey Plaza, finally lost the support of the. Financial East which it had acquired at the signing of the Pact of Warren. This considerable accumulation of  force by 1972-73, had begun to encourage inquiry and exert pressure as the beginning of a major effort to remove the Pentagon, its illegally acquired control of the American foreign policy. Insomuch as the real function of Richard Nixon for years has been to be the business agent for the Pentagon. (Just as the White House has been, in effect, the forward outpost of the military), the steadily mounting intensity of the 1973 confrontation with President Nixon takes on meaning in retrospect.

Cohen: At the Erving hearings,  Bernard Barker compared the Bay of Pigs invasion with the Watergate break-in, and equated the Kennedy Democrats with the 'enemy'. Barker viewed the break-in as "a service to my country". Isn't this the similar mentality that led to Kennedy's murder?

Garrison: Yes, except that here the mentality is operating at a considerably lower echelon. President Kennedy's death was initiated by forces which, at the time, were the most powerful in the United States. In 1963, these forces were irresistible. This happens to be the precise reason for the docile participation of so many individuals in the Warren Commission whitewash.

Cohen: Costa-Gravas' movie "Z" describes the military takeover in Greece. You have likened Kennedy's assassination to a military coup. What are the similarities?

Garrison: Actually, the movie "Z" concerns an incident prior to the military takeover in Greece - which occurred in the Spring of 1967. The movie is based upon a real incident - the assassination of a national leader popular among the Greek people, initiated by elements of the Greek military.

In that sense the story "Z" is similar to the assassination of President Kennedy, who was a victim of a coup d'etat initiated by elements of the warfare sector of the U.S. government - the most powerful leaders of which were the Pentagon Chiefs. (The U S warfare sector by the early 1960's was determined to establish American control in Southeast Asia because of the treasure trove of minerals if strategic value in that locale - such as manganese, chrome, tin, and most especially, vast reserves of offshore oil.)

Cohen: LBJ, who you have called an "accessory after the fact", told journalist Leo Janos in this 'Last Days', "I never believed that Oswald acted alone, although I can accept that he pulled the trigger." Does this confirm your charges?

Garrison: I would hate to have to rely on corroboration on the man who initiated the whitewash of President Kennedy's assassination.

Even to the end, apparently, LBJ was unable to shed his life-long antipathy to the truth. In view of his actions subsequent to John Kennedy's murder; (1-The appointment of the Warren Commission; 2-The concealment of all evidence from the American people until the year 2039 - it is simply not rational for us to pretend that President Johnson, after the assassination if not before - had any doubts about the fact that a number of men were involved and about the fact that Lee Harvey Oswald was a scapegoat, himself a victim, nothing more.

Cohen: You call Davis Ferrie "one of the most important individuals in history". Five days after you interrogated the CIA pilot, he died mysteriously. What role did Ferrie play in the assassination?

Garrison: There still remain, alive and free, men who - courtesy of the federal government - actively participated in the murder of President Kennedy. While the forecast is not yet encouraging, we still cannot eliminate the hope that an honest investigation into John Kennedy's assassination may yet occur.  Accordingly, it would not be practical to comment on David Ferrie's particular role (except to the extent that I already have done in my book Heritage of Stone-Putnam, 1970-Berkeley Paperbacks).

I have turned my attention to trying to communicate the truth about the President's assassination, about the subsequent assassinations and about their real meaning in contemporary history.