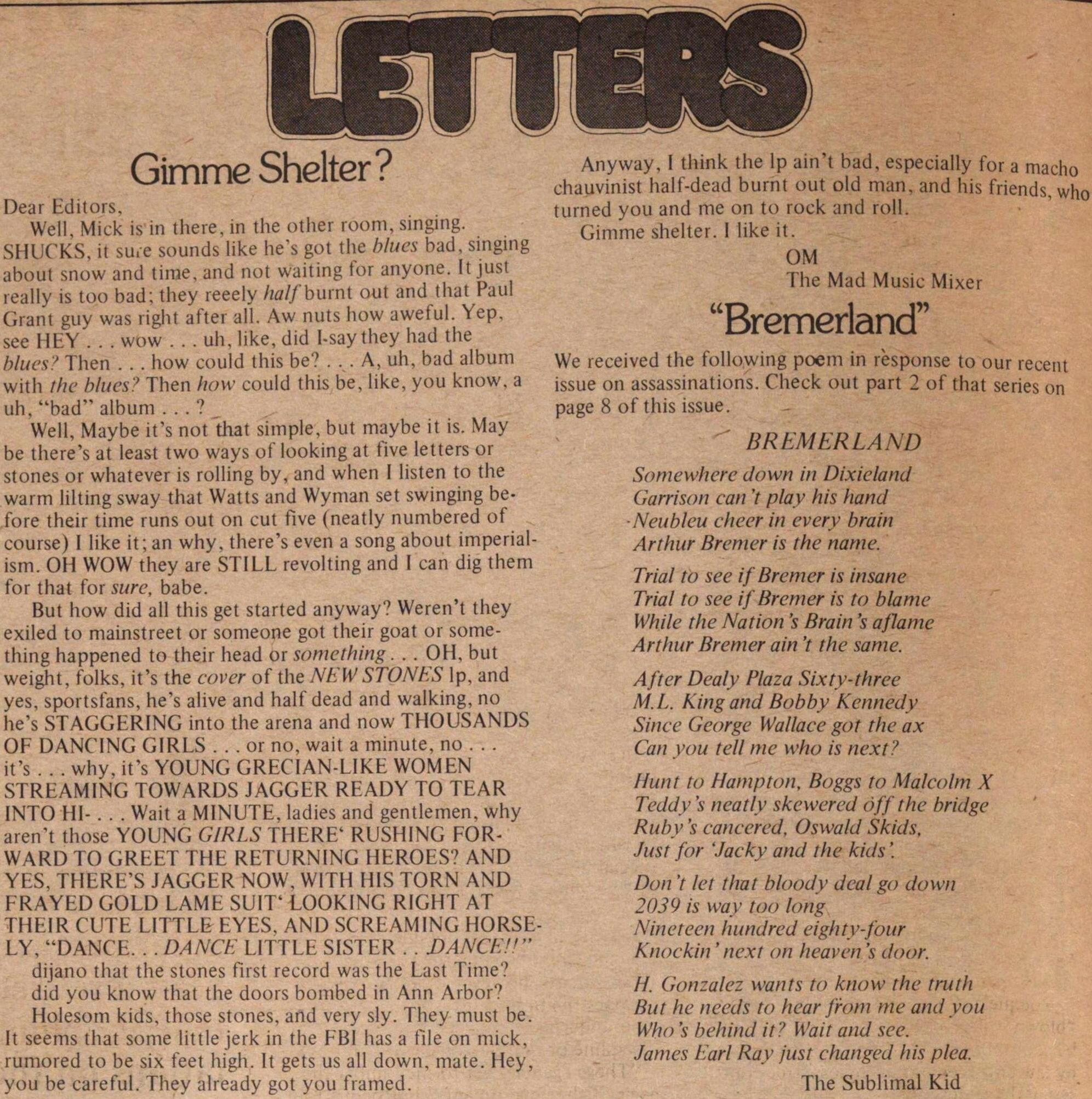 Dear tditors. Well, Mick is in theve, in the otlier room, singing. SHUCKS, it su,e sounds like he's got the blues bad. singing aboui snow and time. and not waiting tbr anyone. It just really is too bad: they reeely half burnt out and tliat Paul Grant guy was right after all. Aw nuts how aweful. Yep, see 1IEY . . . wow . . . uh, like, did I-say they had the blues? Then . . . how could this be? . . . A, uh, bad album witli the blues? Then how could this be, like, you know, a uh. "bad" album . . . ? Well, Maybe it's not "that simple, but maybe it is. May be there's at least two ways of looking at fïve letters or stones or whatever is rolling by, and when I listen to the warm Uiting sway that Watts and Wyman set swinging before their time runs out on cut fïve (neatly numbered of course) I like it; an why. there's even a song about imperialism. OH WOW they are STILL revolting and I can dig them for that for surc, babe. But how did all this get started anyway? Weren't they exiled to mainstreet or someone got their goat or something happened to their head or something . . . OH. but weight, folks, it's the cover of the NEW STONES lp, and yes, sportsfans, he's alive and half dead and walking, no he's STAGGERING into the arena and now THOUSANDS OF DANCING GIRLS . . . or no, wait a minute, no ... it's . . . why, it's YOUNG GRECIAN-LIKE WOMEN STREAMING TOWARDS JAGGER READY TO TEAR INTO ... Wait a MINUTE, ladies and gentlemen, why aren't those YOUNG GIRLS THERE' RUSHING FORWARD TO GREET THE RETURNING HÉROES? AND YES, THERE'S JAGGER NOW. W1TH HIS TORN AND FRAYED GOLD LAME SUIT' LOOKING RIGHT AT THEIR CUTE LITTLE EYES, AND SCREAMING HORSELY, "DANCE. . . DANCE LITTLE SISTER . . DANCE"" dijano that the stones fïrst record was the Last Time? did you know that the doors bombed in Ann Arbor? Holesom kids, those stones. and very sly. They must be. It seems that some little jerk in the FBI has a file on mick. rumored to be six feet high. It gets us all down, mate. Hey, you be careful. They already got you framed. Anyway, I think the lp ain't bad. especially for a macho chauvinist half-dead burnt out old man. and his friends, who turned you and me on to rock and rol!. Gimme shelter. I like it.