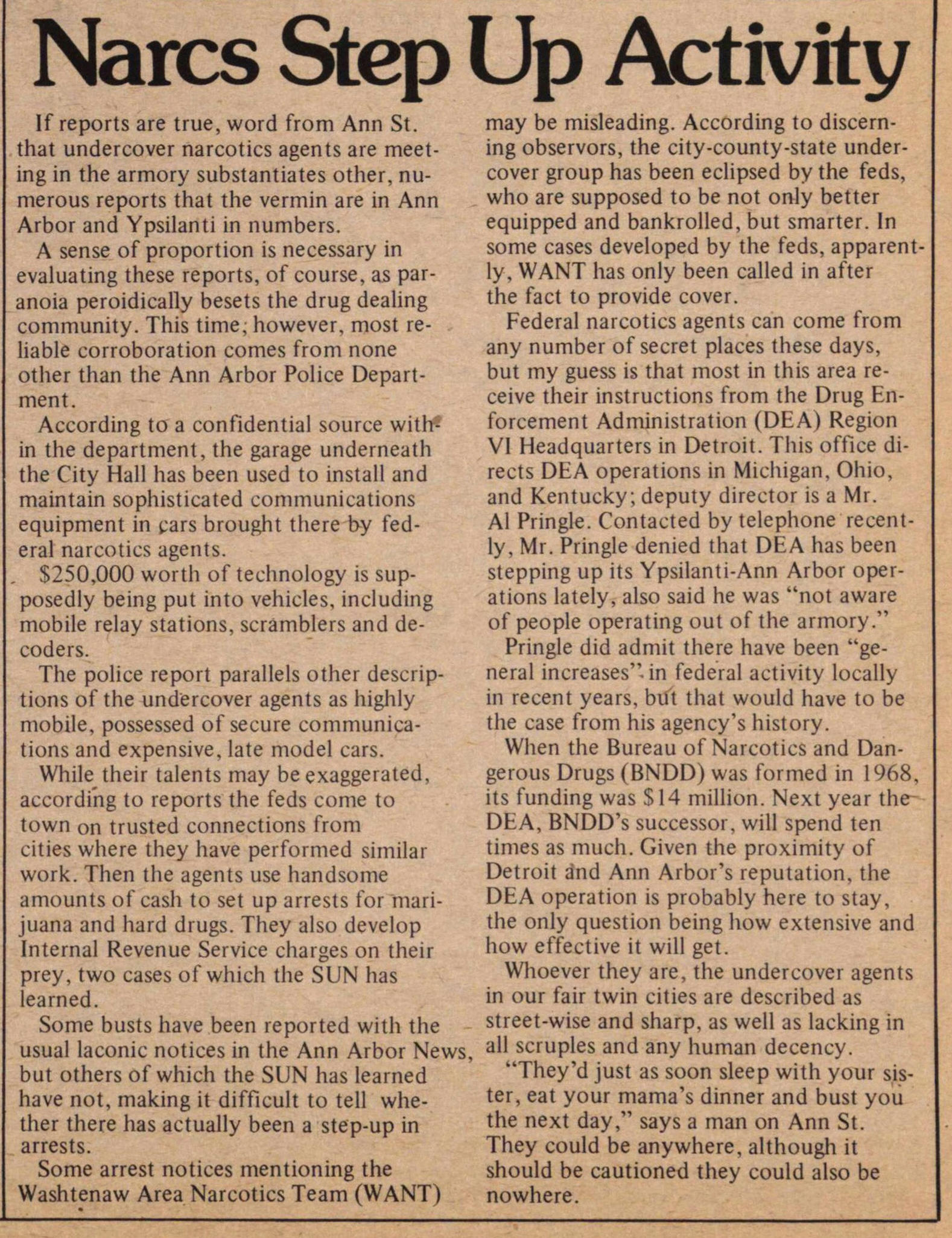 If reports are true, word from Ann St. that undercover narcotics agents are meeting in the armory substantiates other, numerous reports that the vermin are in Ann Arbor and Ypsilanti in numbers. A sense of proportion is necessary in evaluating these reports, of course, as paranoia peroidically besets the drug dealing community. This time; however, most reliable corroboration comes from none other than the Ann Arbor Pólice Department. According to a confidential source within the department, the garage underneath the City Hall has been used to install and maintain sophisticated Communications equipment in cars brought there by federal narcotics agents. . $250,000 worth of technology is supposedly being put into vehicles, including mobile relay stations, scramblers and decoders. The pólice report parallels other descriptions of the undercover agents as highly mobile, possessed of secure Communications and expensive, late model cars. While their talents may beexaggerated. according to reports the feds come to town on trusted connections from cities where they have performed similar work. Then the agents use handsome amounts of cash to set up arrests for marijuana and hard drugs. They also develop Internal Revenue Service charges on their prey, two cases of which the SUN has learned. Some busts have been reported with the usual laconic notices in the Ann Arbor News, but others of which the SUN has learned have not, making it difficult to teil whether there has actually been a step-up in arrests. Some arrest notices mentioning the Washtenaw Area Narcotics Team (WANT) may be misleading. According to discerning observors, the city-county-state undercover group has been eclipsed by the feds, who are supposed to be not only better equipped and bankrolled, but smarter. In some cases developed by the feds, apparently, WANT has only been called in after the fact to provide cover. Federal narcotics agents can come from any number of secret places these days, but my guess is that most in this area receive their instructions from the Drug Enforcement Administraron (DEA) Región VI Headquarters in Detroit. This office directs DEA operations in Michigan, Ohio, and Kentucky, deputy director is a Mr. Al Pringle. Contacted by telephone recently, Mr. Pringle denied that DEA has been stepping up its Ypsilanti-Ann Arbor operations lately, also said he was "not aware of people operating out of the armory ." Pringle did admit there have been "general increases". in federal activity locally in recent years. but that would have to be the case from his agency's history. When the Bureau of Narcotics and Dangerous Drugs (BNDD) was formed in 1968, its funding was S14 million. Next year theDEA, BNDD's successor, will spend ten times as much. Given the proximity of Detroit and Ann Arbor's reputation, the DEA operation is probably here to stay, the only question being how extensive and how effective it will get. Whoever they are, the undercover agents in our fair twin cities are described as street-wise and sharp, as well as lacking in all scruples and any human decency. "They'd just as soon sleep with your sister, eat your mama's dinner and bust you the next day," says a man on Ann St. They could be anywhere, although it should be cautioned they could also be nowhere.