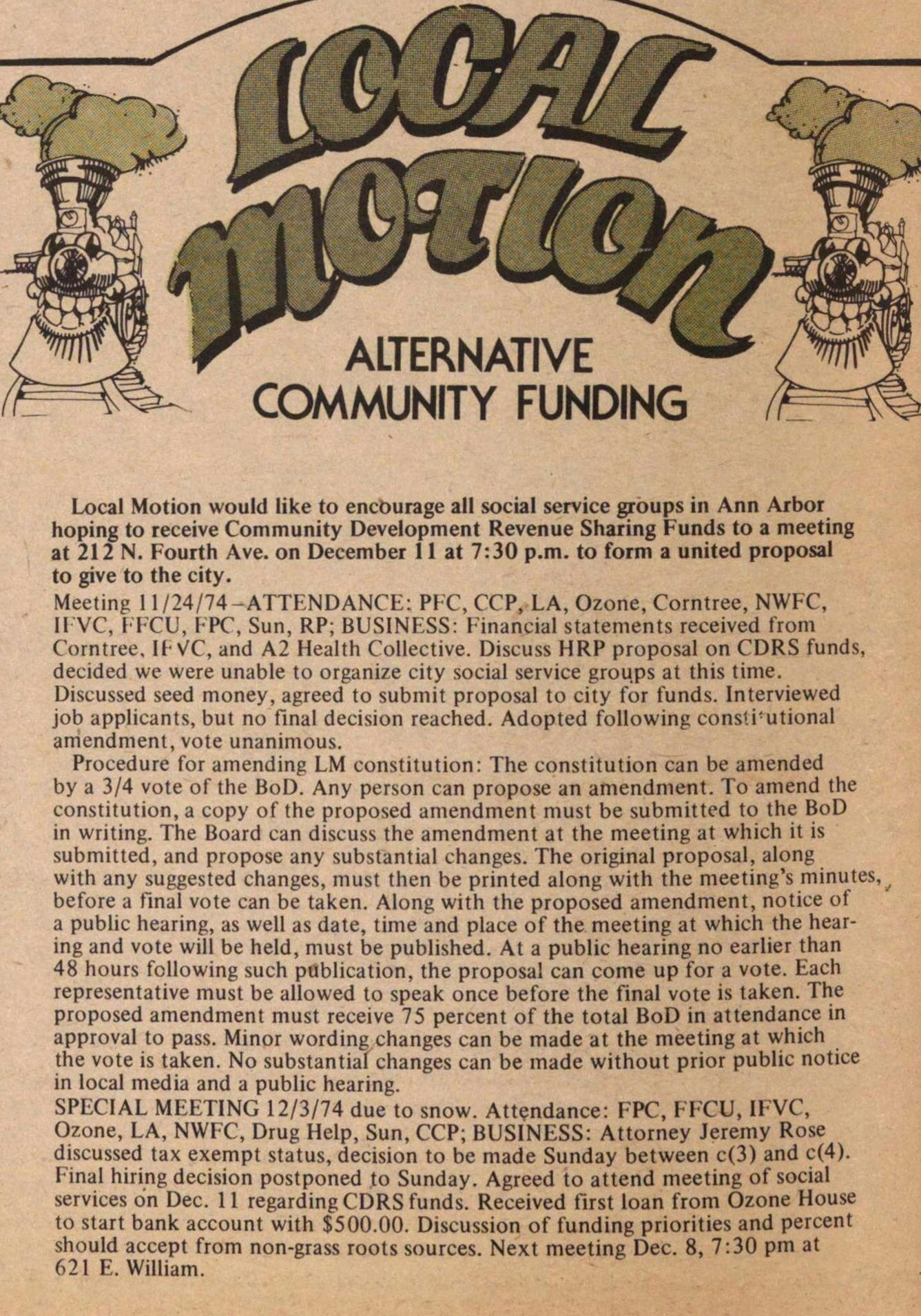 Local Motion would like to encourage all social service groups in Ann Aiboi hoping to receive Community Development Revenue Sharing Funds to a meeting at 212 N. Fourth Ave. on December 1 1 at 7:30 p.m. to form a united proposal to give to the city. Meeting 1 l2474ATTENDANCE: PFC, CCP, LA, Ozone, Corntree, NWFC, II VC, FFCU, FPC, Sun, RP; BUSINESS: Financial statements received from Corntree, VC, and A2 Health Collective. Discuss HRP proposal on CDRS funds, decided we were unable to organize city social service groups at this time. Discussed seed money, agreed to submit proposal to city for funds. Interviewed job applicants, but no final decisión reached. Adopted following consü'utional amendment, vote unanimous. Procedure for amending LM constitution: The constitution can be amended by a 34 vote of the BoD. Any person can propose an amendment. To amend the constitution, a copy of the proposed amendment must be submitted to the BoD in writing. The Board can discuss the amendment at the meeting at which it is submitted, and propose any substantial changes. The original proposal, along with any suggested changes, must then be printed along with the meeting's minutes, before a final vote can be taken. Along with the proposed amendment, notice of a public hearing, as well as date, time and place of the meeting at which the hearing and vote will be held, must be published. At a public hearing no earlier than 48 hours following such püblication, the proposal can come up for a vote. Each representative must be allowed to speak once before the final vote is taken. The proposed amendment must receive 75 percent of the total BoD in attendance in approval to pass. Minor wording changes can be made at the meeting at which the vote is taken. No substantial changes can be made without prior public notice in local media and a public hearing. SPECIAL MEETING 12374 due to snow. Attendance: FPC, FFCU, II VC, Ozone, LA, NWFC, Drug Help, Sun, CCP; BUSINESS: Attorney Jeremy Rose discussed tax exempt status, decisión to be made Sunday between c(3) and c(4). Final hiring decisión postponed to Sunday. Agreed to attend meeting of social services on Dec. 11 regarding CDRS funds. Received first loan from Ozone House to start bank account with $500.00. Discussion of funding priorities and percent should accept from non-grass roots sources. Next meeting Dec. 8, 7:30 pm at 621 E. William.