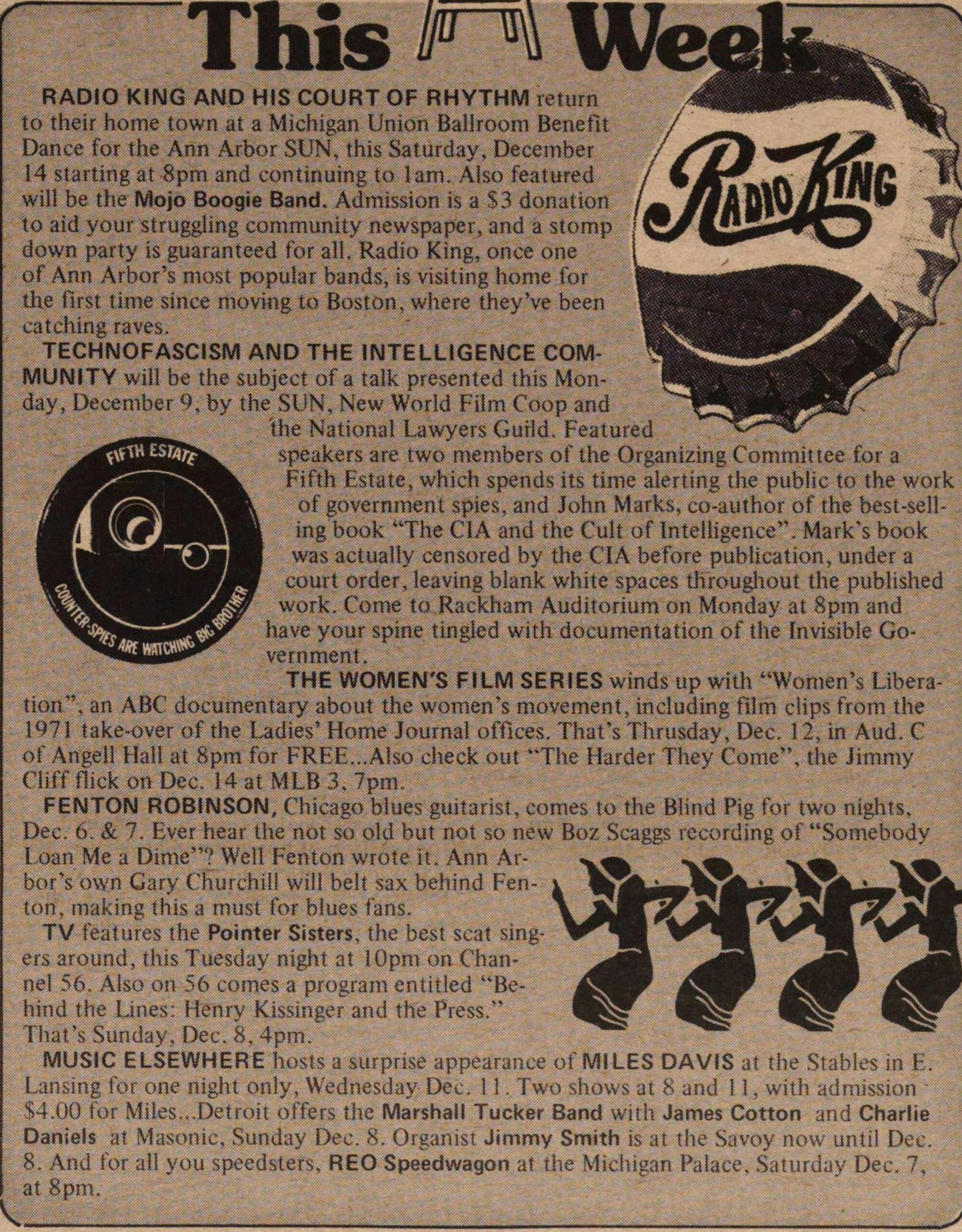 RADIO KING AND HIS COURT OF RHYTHM return to their home town at a Michigan Union Ballroom Benefit Dance for the Ann Arbor SUN, this Saturday, December 14 starting at 8pm and continuing to lam. Also featured will be the Mojo Boogie Band. Admission is a $3 donation to aid your struggling community newspaper, and a stomp j down party is guaranteed for all. Radio King, once one 1 of Ann Arbor's most popular bands, is visiting home for I the first time since moving to Boston, where they've been 1 catching raves. ' TECHNOFASCISM AND THE INTELLIGENCE COMMUNITY will be the subject of a talk presented this Monday, December , by the SUN, New World Film Coop and the National Lawyers Guiid. Featured sf speakers are two members of the Organizing Committee for a Fifth Estáte, which spends its time alerting the public to the work of governnient spies, and John Marks, co-author of the best-selli ing book "The CIA and the Cult of Intelligence". Mark 's book was actually censored by the CIA before publication, under a court order, leaving blank white spaces throughout the published work. Come to Rackham Auditorium on Monday at 8pm and have your spine tingled with documentation of the Invisible Government. THE WOMEN'S FILM SERIES winds up with "Women's tion , an ABC documentary about the women's movement, including film clips from the 1971 take-over of the Ladies' Home Journal offices. That's Thrusday, Dec. 1 2, in Aud. C of Angelí Hall at 8pm for FREE...Also check out "The Harder They Come", the Jimmy Cliff fiick on Dec. 14 at MLB 3. 7pm. FENTON ROBINSON, Chicago blues guitarist, comes to the Blind Pig for two nights. Dec. 6. & 7. Ever hear the not so oíd but not so new Boz Scaggs recording of "Somebody Loan Me a Dime weü renton wrote it. Ann Arbor's own Gary Churchill will belt sax behind Fenton. making this a must for blues fans. TV features the Pointer Sisters, the best scat singers around, this Tuesday night at lOpm on Channel 56. Also on 56 comes a program entitled "Behind the Unes: Henry Kissinger and the Press." Tliat's Sunday, Dec. 8, 4pm. MUSIC ELSEWHERE hosts a surprise appearance of MILES DAVIS af the Stables in E. Lansing for one niglit only, Wednesday Dec. 1 1 . Twu shows at 8 and 1 1 , with admission ■ $4.00 tor Miles. ..Detroit offers the Marshall Tucker Band with James Cotton and Charlie Daniels at Masonic, Sunday Dec. X. Organist Jimmy Smith is at the Savoy now until Dec. 8. And for all you speedsters, REO Speedwagon at the Michigan Palace, Saturday Dec. 7, at 8pm. _ ;