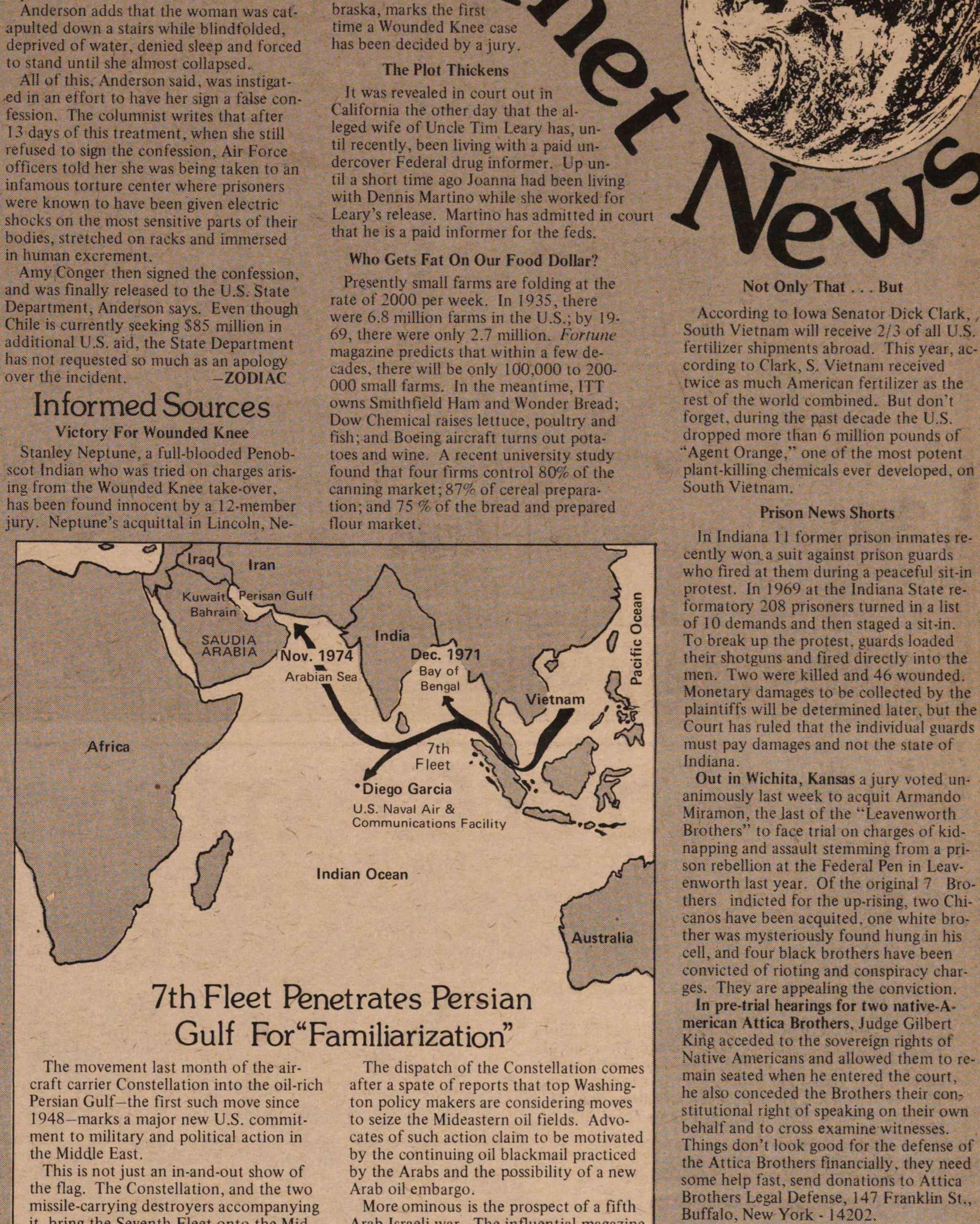 Stanley Neptune, a full-blooded Penobscot Indian who was tried on charges arising from the Wounded Knee take-over. has been found innocent by a 12-member jury. Neptune's acquittal in Lincoln, braska, marks the firsi time a Wounded Knee case has been decided by a jury. The Plot Thickens It was revealed in court out in California the other day that the al leged wife of Únele Tim Leary has, until recently, been living with a paid undercover Federal drug informer. Up til a short time ago Joanna had been living with Dennis Martino while she worked foi Leary s release. Martirio has admitted in eottrt that he is a paid informer for the feds. Who Gets Fat On Our Food Dollar? Prsently small farms are folding at the rate of 2000 per week. In i 935 , there were 6.8 million farms in the U.S.; by 14(■'). there were only 2.7 million. Fortune magazine predicts that within a few decades, there witl be oniy 100,000 to 200000 small farms. In the meantíme, 1TT owns Smithfield Ham and Wonder Bread; Dow Chemical raises lettuce, poultry and fish; and Boeing aircraft turns out potatoes and wine. A recent university study found that four firms control 80% of the canning marketjS?1 of cereal preparation; and 75 % of the bread and prepared flour market. Not Only That . . . But Aceording to !owa Senator Dick Clark, , South Vietnam will receive 23 of all U.S. fertili.er shipments abroad. This year, according to Clark, S. Vietnam re eet ved twice as much American fertilizer as the rest of the world combined. But don't forget. during the past decade the U.S. dropped more than 6 million pounds of ■'Agent Orange," one of the most potent plant-killing chemicals ever developed. on South Vietnam. Prison News Shorts In Indiana 1 1 tonner prison inmates recently won. a suit against prison guards who fired at them during a peaceful sit-in protest. In Í969 af the indiana State reformatory 208 prisoners turned in a list of 10 demands and then staged a sit-in. To break up the protest, guards loaded their shotguns and fired directiy into the men. Two were killed and 46 wounded. Monetary damages to be collected by the plaintiffs will be determined later, but the Court has ruled that the individual guards must pay damages and not the state of Indiana. Out in Wichita, Kansas a jury voted unanimously last week to acquit Armando Miramon, the Jast of the "Leavenworth Brothers" to face trial on charges of kidnapping and assault stemming from a prison rebellion at the Federal Pen in Leavenworth last year. Of the original 7 Brothers indicted for the up-rising, two Chícanos have been acquited. one white brother was mysteriously found hung in his cell, and four black brothers have been convicted of rioting and conspiracy charges. They are appealing the conviction. In pre-trial hearings for two native-American Attica Brothers, Judge Gilbert King acceded to the sovereign rights of Native Americans and allowed them to remain seated when he entered the court, he also conceded the Brothers their constitutional right of speaking on their owa behalf and to cross examine witnesses. Things don't look good for the defense of the Attica Brothers financially. they need some help fast, send donations to Attica Brothers Legal Defense, 147 Franklin St., Buffalo, New York - 14202.