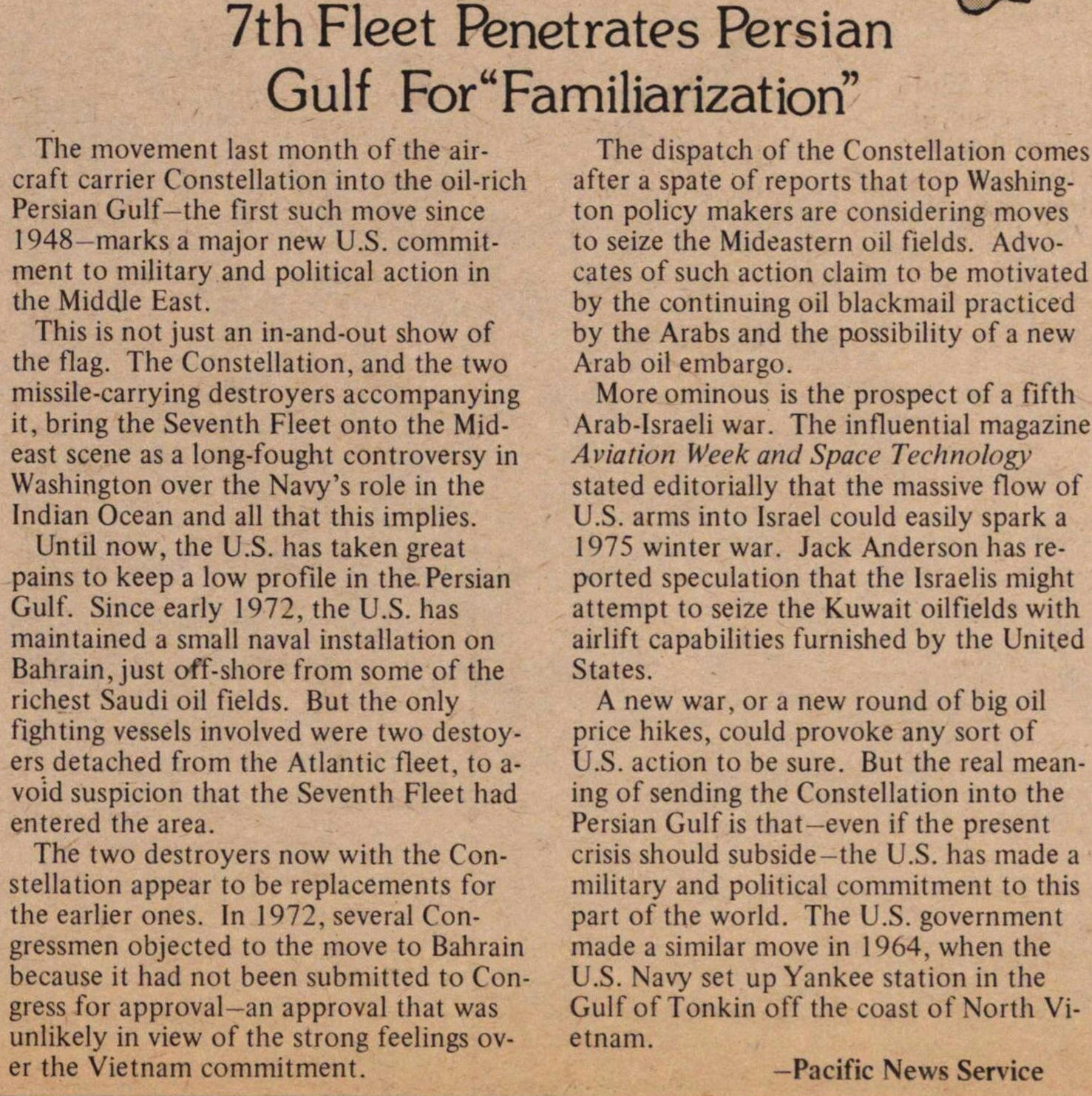 The movement last month of the aircraft carrier Constellation into the oil-rich Persian Gulf-the first such move since 1948-marks a major new U.S. commitment to military and political action in the Middle East. This is not just an in-and-out show of the flag. The Constellation, and the two missile-carrying destroyers accompanying it, bring the Seventh Fleet onto the Mideast scène as a long-fought controversy in Washington over the Navy's role in the Indian Ocean and all that this implies. Until now, the U.S. has taken great pains to keep a low profile in the Persian Gulf. Since early 1972, the U.S. has maintained a small naval installation on Bahrain, just off-shore from some of the richest Saudi oil fields. But the only fighting vessels involved were two destoyers detached from the Atlantic fleet, to avoid suspicion that the Seventh Fleet had entered the area. The two destroyers now with the Constellation appear to be replacements for the earlier ones. In 1972, several Congressmen objected to the move to Bahrain because it had not been submitted to Congress for approval-an approval that was unlikely in view of the strong feelings over the Vietnam commitment. The dispatch of the Constellation comes after a spate of reports that top Washington policy makers are considering moves to seize the Mideastern oil fields. Advocates of such action claim to be motivated by the continuing oil blackmail practiced by the Arabs and the possibility of a new Arab oil embargo. More ominous is the prospect of a fifth Arab-Israeli war. The influential magazine Aviation Week and Space Technology stated editorially that the massive flow of U.S. arms into Israel could easily spark a 1975 winter war. Jack Anderson has reported speculation that the Israelis might attempt to seize the Kuwait oilfields with airlift capabilities furnished by the United States. A new war, or a new round of big oil price hikes, could provoke any sort of U.S. action to be sure. But the real meaning of sending the Constellation into the Persian Gulfis that- even if the present crisis should subside-the U.S. has made a military and political commitment to this part of the world. The U.S. government made a similar move in 1964, when the U.S. Navy set up Yankee station in the Gulf of Tonkin off the coast of North Vietnam.