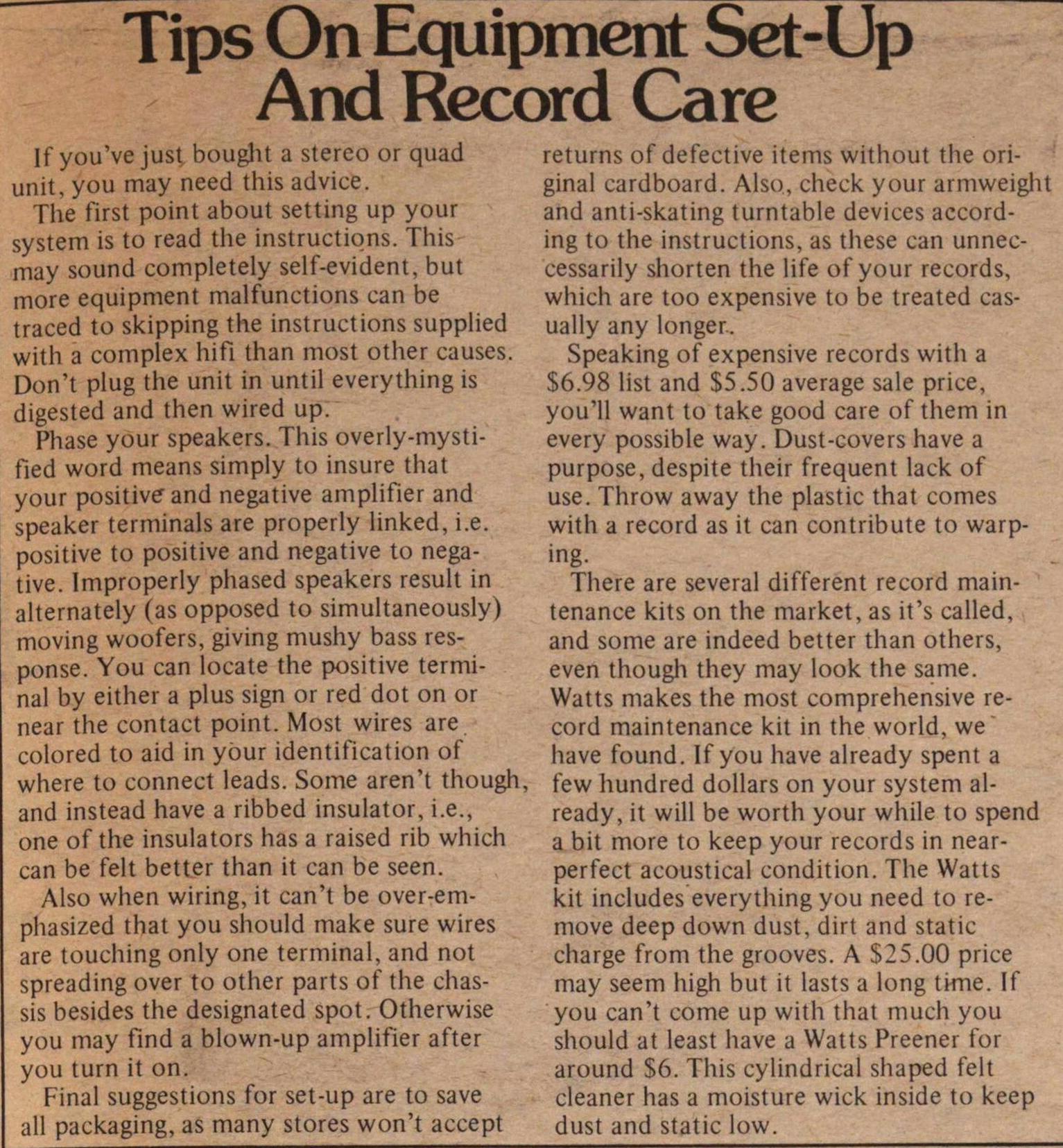 If you've just, bought a stereo or quad unit, you may need this advice. The first point about setting up your system is to read the instructiqns. This may sound completely self-evident, but more equipment malfunctions can be traced to skipping the instructions supplied with a complex hifi than most other causes. Don't plug the unit in until everything is digested and then wired up. Phase your speakers. This overly-mystified word means simply to insure that your positive and negative amplifier and speaker terminals are properly linked, i.e. positive to positive and negative to negative. Improperly phased speakers result in alternately (as opposed to simultaneously) moving woofers, giving mushy bass response. You can lócate the positive terminal by either a plus sign or red dot on or near the contact point. Most wires are colored to aid in yöur identification of where to connect leads. Some aren't though, and instead have a ribbed insulator, i.e., one of the insulators has a raised rib which can be feit better than it can be seen. Also when wiring, it can 't be over-emphasized that you should make sure wires are touching only one terminal, and not spreading over to other parts of the chassis besides the designated spot. Otherwise you may find a blown-up amplifier after you turn it on. Final suggestions for set-up are to save all packaging, as many stores won't accept returns of defective items without the original cardboard. Also, check your armweight and anti-skating lurntable devices according to the instructions, as these can unneccessarily shorten the life of your records, which are too expensive to be treated casually any longer. Speaking of expensive records with a $6.98 list and S5.5O average sale price, you'U want to take good care of them in every possible way. Dust-covers have a purpose, despite their frequent lack of use. Throw away the plastic that comes with a record as it can contribute to warping. There are several different record maintenance kits on the market, as it's called, and some are indeed better than others, even though they may look the same. Watts makes the most comprehensive record maintenance kit in the world, we have found. If you have already spent a few hundred dollars on your system already, it will be worth your while to spend a bit more to keep your records in nearperfect acoustical condition. The Watts kit includes everythingyou need to remove deep down dust, dirt and static charge from the grooves. A S25.OO price may seem high but it lasts a long time. If you can 't come up with that much you should at least have a Watts Preener for around S6. This cylindrical shaped feit cleaner has a moisture wiek inside to keep dust and static low.