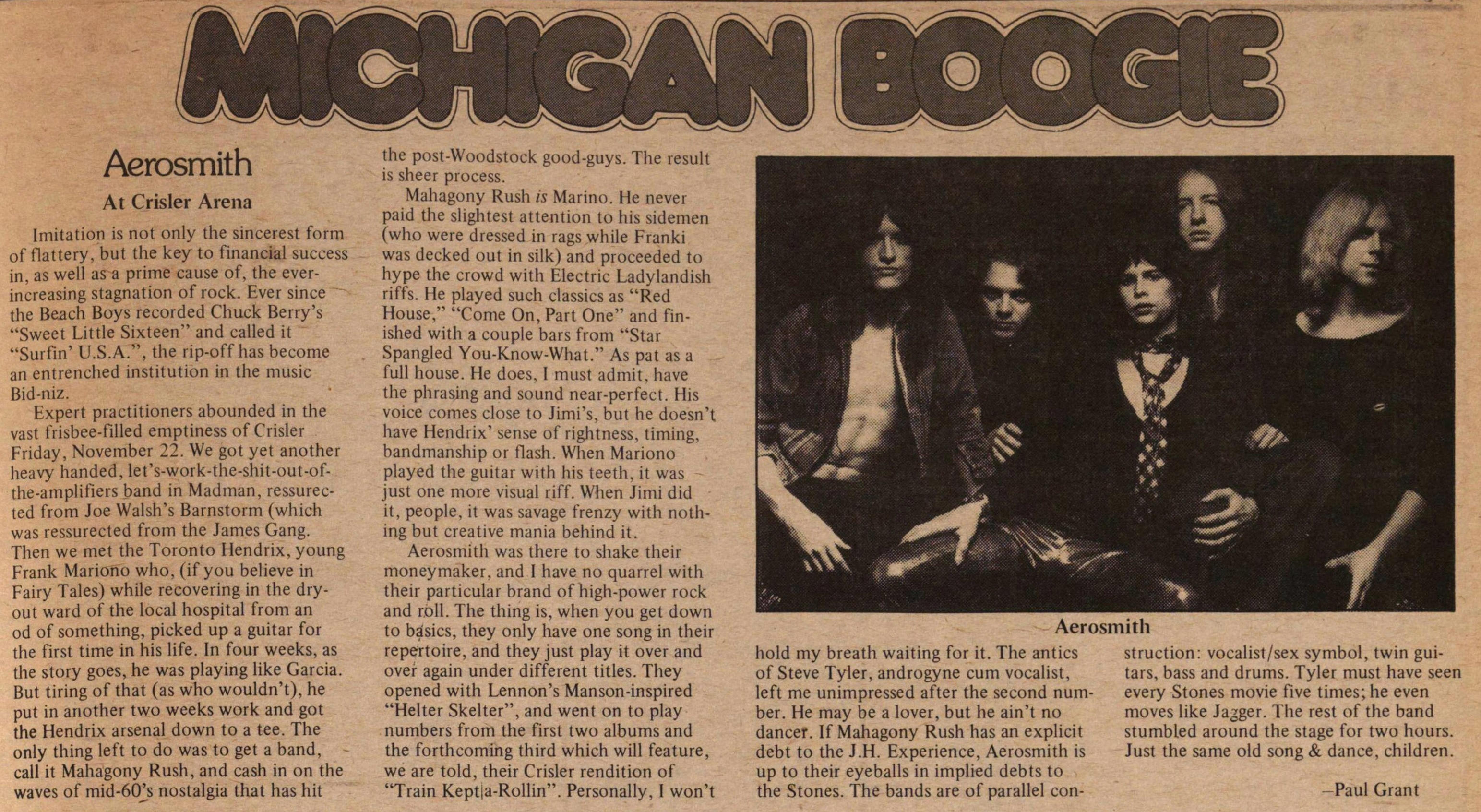 Imitation is not only the sincerest form of flattery, but the key to financial success in, as well as a prime cause of, the everincreasing stagnation of rock. Ever since the Beach Boys recorded Chuck Berry's "Sweet Little Sixteen" and called it "Surfin' U.S.A.", the rip-off has become an entrenched institution in the music Bid-niz. Expert practitioners abounded in the vast frisbee-filled emptiness of Crisler Friday, November 22. We got yet another heavy handed, let's-work-the-shit-out-ofthe-amplifiers band in Madman, ressurected from Joe Walsh's Barnstorm (wliicli was ressurected from the James Gang. Then we met the Toronto Hendrix, young Frank Mariono who, (if you believe in Fairy Tales) while recovering in the dryout ward of the local hospital from an od of something, picked up a guitar for the first time in his life. In four weeks, as the story goes, he was playing like Garcia. But tiring of that (as who wouldn't), he put in another two weeks work and got the Hendrix arsenal down to a tee. The only thing left to do was to get a band, cali it Mahagony Rush, and cash in on the waves of mid-6(Ts nostalgia that has hit the post-Woodstock good-guys. The result is sheer process. Maliagony Rush is Marino. He never paid the slightest attention to his sidemen (wlio were dressed in rags while Franki was decked out in silk) and proceeded to hype the crowd with Electric Ladylandish riffs. He played such classics as "Red House," "Come On, Part One" and finished with a couple bars froni "Star Spangled You-Know-What." As pat as a full house. He does, I must admit. have the phrasing and sound near-perfect. His voice comes close to Jimi's, but he doesn't have Hendrix' sense of rightness, timing, bandmanship or flash. When Mariono played the guitar with his teeth, it was just one more visual riff. When Jimi did it, people, it was savage frenzy with nothing but creative mania behind it. Aerosmith was there to shake their moneymaker, and 1 have no quarrel with their particular brand of high-power rock and roll. The thing is, when you get down to ba'sics, they only have one song in their repertoire, and they just play it over and over again under different titles. They opened with Lennon's Manson-inspired "Helter Skelter", and went on to play numbers from the first two albums and the forthcoming third which will feature, we are told, their Crisler rendition of "Train Keptia-Rollin". Personally, I won't hold my breath waiting for it. The antics of Steve Tyler, androgyne cum vocalist, left me unimpressed after the second number. He may be a lover, but he ain't no dancer. If Mahagony Rush has an explicit debt to the J.H. Experience, Aerosmith is up to their eyeballs in implied debts to the Stones. The bands are of parallel struction: vocalistsex symbol, twin guitars, bass and drums. Tyler must have seen every Stones movie fïve times; he even moves like Jagger. The rest of the band stumbled around the stage for two hours. Just the same oíd song & dance, children.