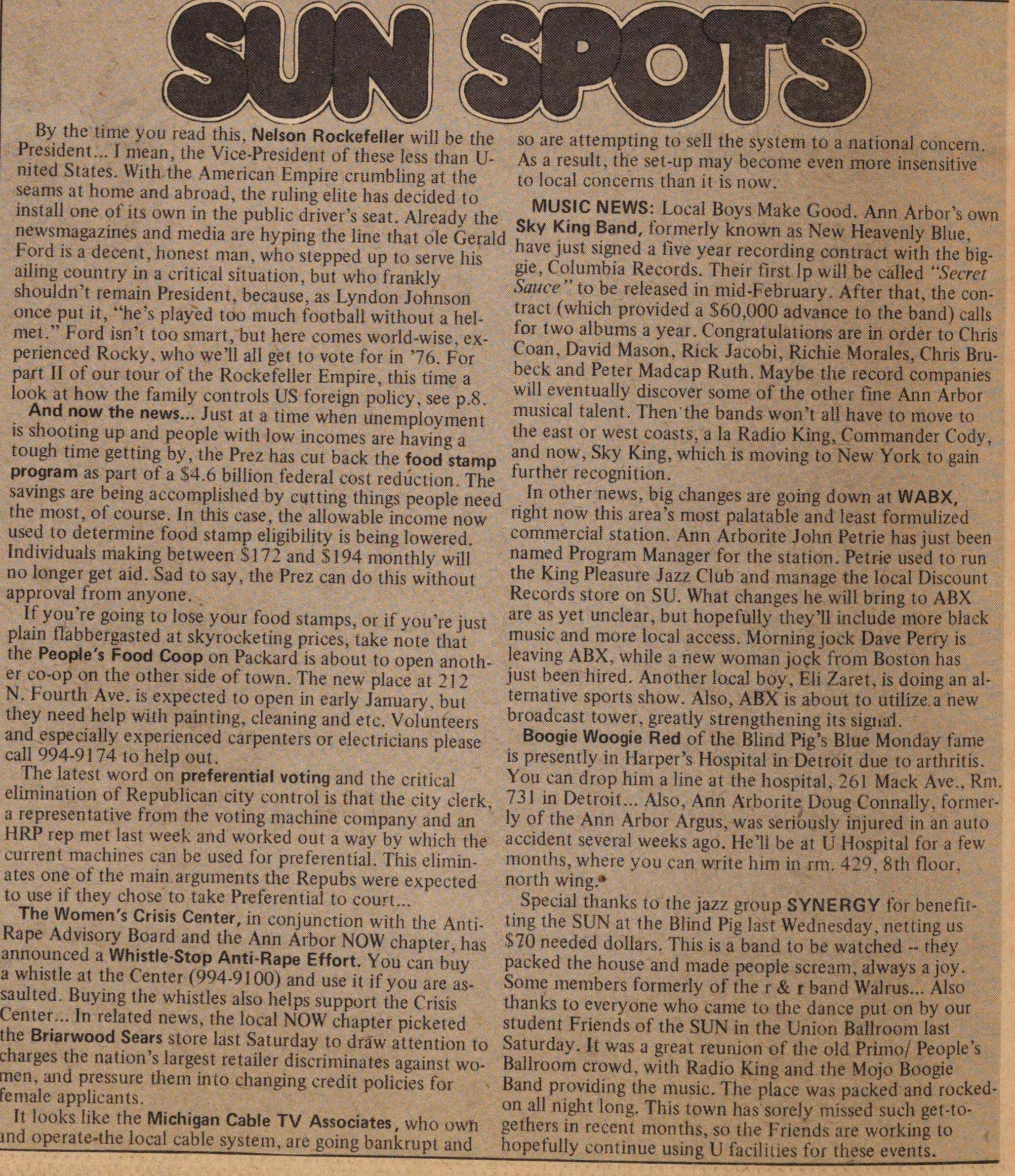 By the time you read this, Nelson Rockefeller will be the President... I mean, the Vice-President of these ess than United States. With the American Empire crumbting at the seams at home and abroad, the ruling elite has decided to install one of its own in the public driver's seat. Already the newsmagazines and media are hyping the line that ole Gerak Ford is a decent, honest man, who stepped up to serve his aiJing country in a crítica! sitúa tion, but who frankly shouldn't remain President, because, as Lyndon Johnson onceput it, "he's played too much football without a helmet." Ford isn't too smart, but here comes world-wise, experienced Rocky. who we'll all get to vote for in '76. For part II of our tour of the Rockefeller Empire, this time a look at how the family controls US foreign policy see p 8 And now the news... Just at a time when uncmployment is shooting up and people with low incomes are havine a tough time getting by, the Prez has cut back the food stamp program as part of a S4.6 billion federal cosí rediiction. The savings are being accomplished by cutting things people need the most, ot course. In this case, the allowable income now used to determine food stamp eligibility is being lowered Individuals making between Si 72 and Si 94 monthly wili no longer get aid. Sad to say, the Prez can do this without approval f rom anyone. If you're going to lose your food stamps, or if youïe just plam flabbergasted at skyrocketing prices, take note tliat the Peopte's Food Coop on Packard is about to open another co-op on the other side of town. The new place at 2 ! 2 N. Fourth Ave. is expected to open in early January but they need help wiih painting, cleaning and etc. Volunteers and especially experienced carpenters or electricians please cali 994-91 74 to help out. The latest word on preferential voting and the critica! elimination of Republican city control is that the city clerk, a representative from the voting machine company and an HRP rep met last week and worked out a way by which the current machines can be used for preferential. This eliminates one of the main arguments the Repubs were expected to use if they chose'to take Preferential to court... The Women's Crisis Center, in conjunction with the AntiRape Advisory Board and the Ann Arbor NOW chapter has announced a Whistle-Stop Anti-Rape Effort. You can büy a whistle at the Center ("994-91 00) and use it if you are assaulted. Buying the whistles also helps support the Crisis Center... In related news, the local NOW chapter picketed the Briarwood Sears store last Saturday to draw attention to charges the nation's largest retailer discriminates against women, and pressure them into changing credit policies for female applicants. It looks like the Michigan Cable TV Associates, who own ind operate-the local cable system, are going bankrupl and so are attempting to sell the system to a national concern. As a result, the set-up may become even more insensitive to local concerns than it is novv. MUSIC NEWS: Local Boys Make Good. Ann Arbor's own Sky King Band, formerly known as New Heavenly Blue, have just signed a five year recording contract with the biggie, Cdumbia Records. Their first Ip will be called "Secret Sauce" to be released in mid-February. After that, the contract fwhich provided a 560,000 advance to the band) calis for two albums a year. Congratulations are in order to Chris Coan, David Masón, Rick Jacobi, Richie Morales, Chris Brubeck and Peter Madcap Ruth. Maybe the record companies will eventually discover some of the other fine Ann Arbor musical talent. Thenthe bands won 't all have to move to the east or west coasts, a la Radio King, Commander Cody, and now, Sky King, which is moving to New York to gain further recognition. In other news, big changes are going down at WABX, right now this area's most palatable and least formulized commercial station. Ann Arborite John Petrie has just been named Program Manager for the station. Petrie used to run the King Pleasure Jazz Club and manage the local Discount Records store on SU. What changes he will bring to ABX are as yet unclear, but hopefully they'Il include more black music and more local access. Morning jock Dave Perry is leaving ABX, while a new woman jock from Boston has just been hired. Another local boy, Eli Zaret, is doing an alternative sports show. Also, ABX is about to utilize.a new broadcast tower, greatly strengthening its sigiiai. Boogie Woogie Red of the Blind Pig's Blue Monday fame is presently in Harper's Hospital in Detroit due to arthritis. You can drop him a line at the hospital, 261 Mack Ave.. Rm. 731 in Detroit... Also, Ann Arborite. Doug Connally, formerly of the Ann Arbor Argus, was seriously injured in an auto accident several weeks ago. He '11 be at U Hospital for a few months, where you can write him in rm. 429, 8th floor. north wing. Special thanks to the jazz group SYNERGY for benefitting the SUN at the Blind Pig last Wednesday, netting us $70 needed dollars. This is a band to be watched - mey packed the house and made people scream, always a joy. Some members formerly of the r & r band Walrus... Also thanks to everyone who came to the dance put on by our student Friends of the SUN in the Union Ballroom last Saturday. It was a great reunión of the old Primo Peoplc's Ballroom crowd, with Radio King and the Mojo Boogie Band providing the music. The place was packed and rockedon all night long. This town has sorc-ly missed such get-togethers in recent months, so the friends are working to hopefully continue using U facilities for these events.