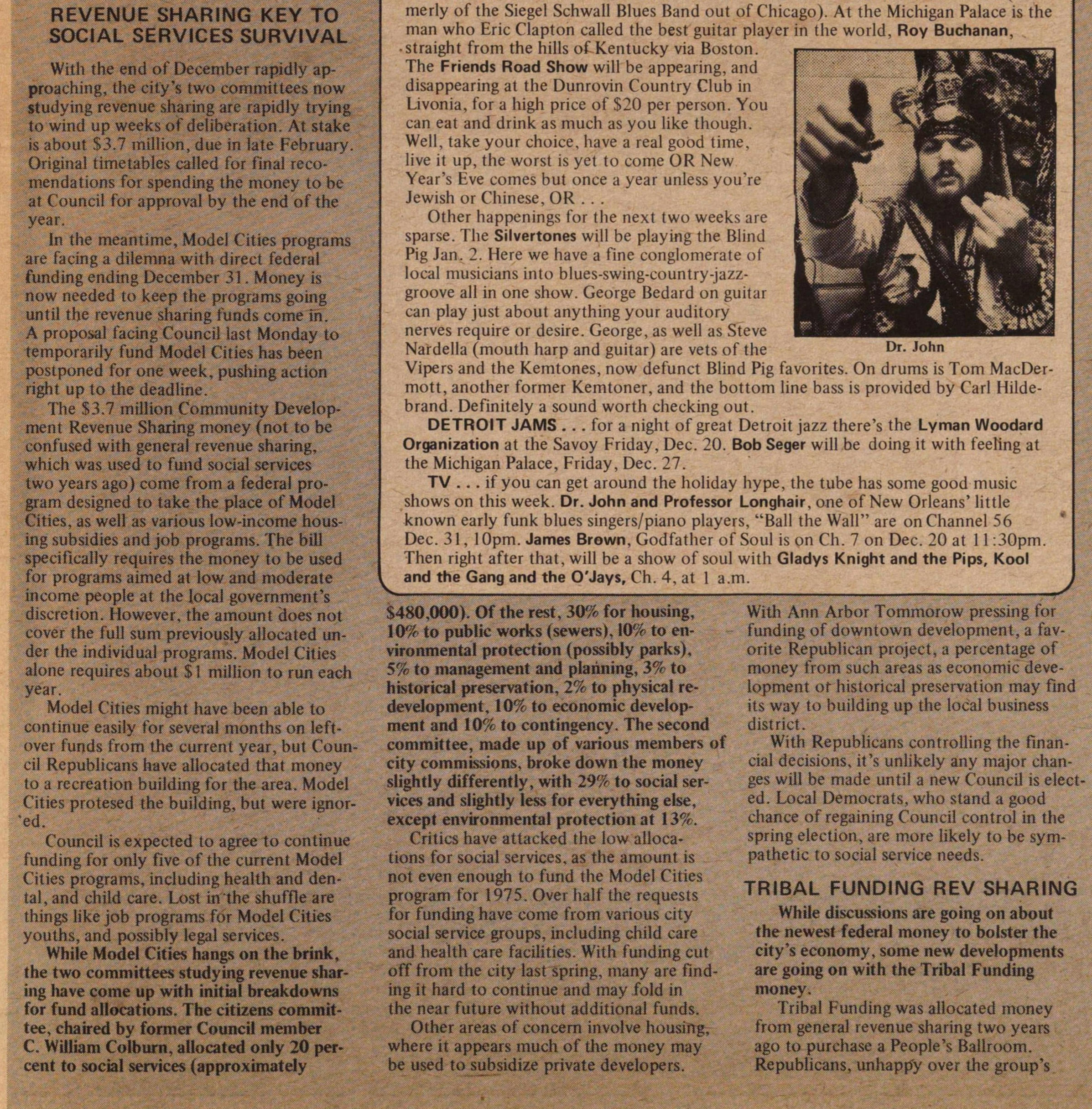 With the end of December rapidly approaching, the city's two comniiitees now studying revenue sharing are rapidly trying to wind up weeks of deliberation. At stake is about $3.7 inillion, due in late February. Original ümetables called for final recomendations for spending the money to be at Councit for approval by the end of the year. In the meantime, Model Cities programs are facing a dilemna with direct federal funding ending December 31 . Money is now needed to keep the programs going until the revenue sharing funds come in. A proposal facing Council last Monday to temporarily fund Model Cities has been postponed for one week, pushing action right up to the deadline. The $3.7 million Community Development Revenue Sharing money (not to be confused with general revenue sharing, which was used to fund social services two years ago) come from a federal program designed to take the place of Model Cities, as well as various low-income housing subsidies and job programs. The biil specifically requires the money to be used for programs aimed at low and moderate income people at the local government's discretion. However, the amount does not cover the full sum previously allocated under the individual programs. Model Cities alone requires about $ 1 million to run each year. Model Cities might have been able to continue easily for several months on leftover funds from the current year, but Council Republicans have allocated that money to a recreation building for the area. Model Cities protesed the building, but were ignored. Council is expected to agree to continue funding for only five of the current Model Cities programs, including health and dental, and child care. Lost in the shuffle are things like job programs for Model Cities youths, and possibly legal services. While Model Cities hangs on the brink, the two committees studying revenue sharing have come up with initial breakdowns for fund allocations. The citizens committee, chaired by former Council member C. Wiiliam Colburn, allocated onty 20 percent to social services (approximately $480,000). Of the rest, 30% for housing, 10% to public works (sewers), 10% to environmental protection (possibly parks), 5% to management and planning, 3% to historical preservation, 2% to physical redevelopment, 10% to economie development and 10% to contingency. The second committee, made up of various members of city commissions, broke down the money slightly differently, with 29% to social services and slightly less for everything else, except environmental protection at 1 3%. Crilics liave attacked ihe low allocations for social services, as the amount is not even enough to fund the Model Cities program for 1975. Over half the requests for funding have come from various city social service groups, including child care and health care facilities. With funding cut off from the city last spring, many are finding it hard to continue and may fold in the near future without additional funds. Other areas of concern involve housing, where it appears much of the money may be used to subsidize private developers. Witli Ann Arbor Tommorow pressing for funding of downtown development, a favorite Republican project, a percentage of money from such areas as economie development of historica] preservation may find its way to building up the local business district. With Republicans controlling the financial decisions, it's unlikely any major ehanges will be made until a new Council is elected. Local Democrats, who stand a good chance of regaining Council control in the spring election, are more likely to be sympathetic to social service needs.