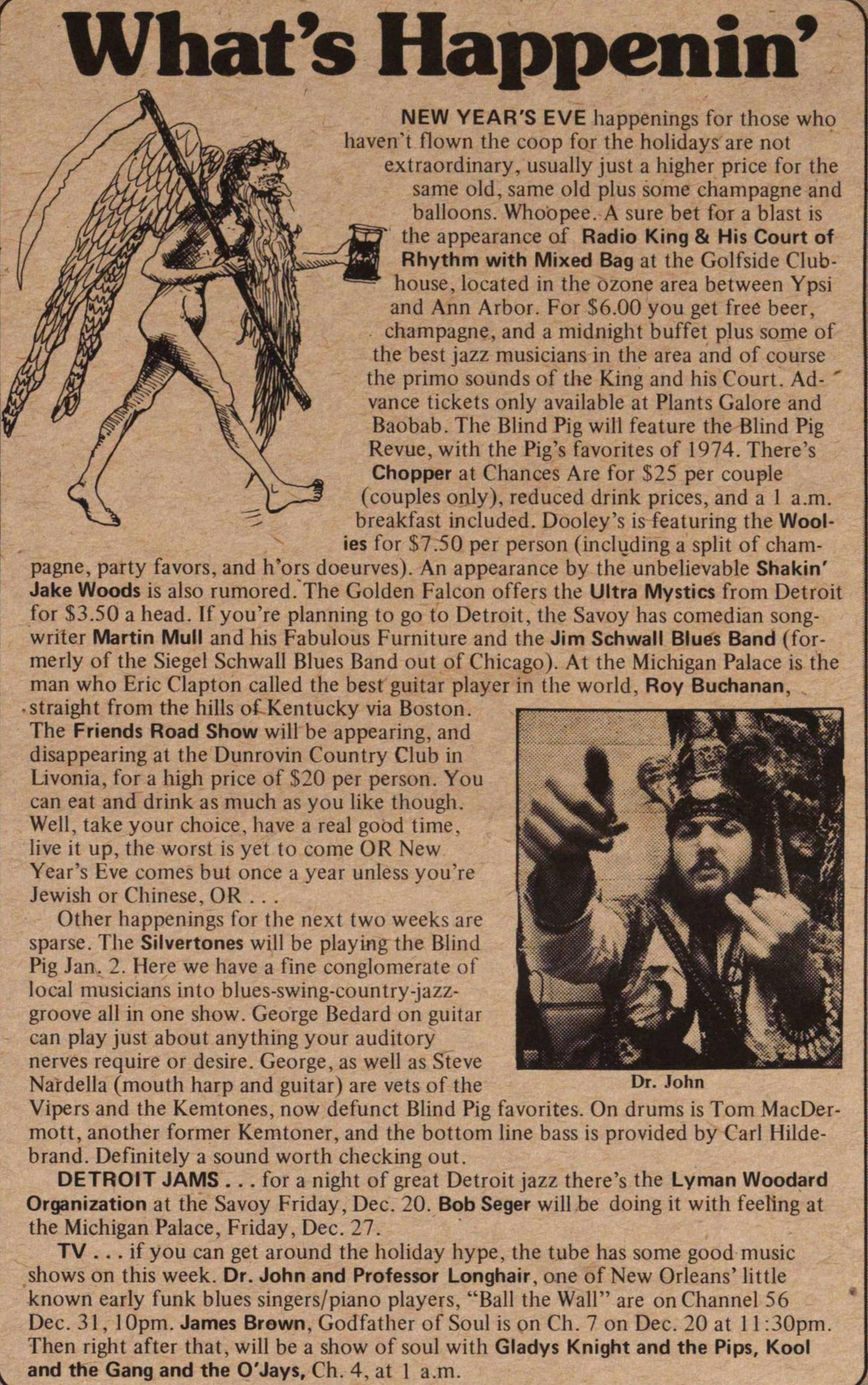 NEW YEAR'S EVE happenings for those who liaven't flown the coop for the holidays are not extraordinary, usually just a higher price for the same oíd, same oíd plus some champagne and balloons. Whoöpee. A sure bet for a blast is the appearance oJF Radio King & His Court of Rhythm with Mixed Bag at the Golfside Clubhouse, located in the ozone area between Ypsi and Ann Arbor. For S6.00 you get free beer, champagne, and a midniglH buffet plus some of the best jazz musicians in the área and of course the primo sounds of the King and his Court. Advance tickets only available at Plants Calore and Baobab. The Blind Pig will feature the Blind Pig Revue, with the Pia's favorites of 1974. There's Chopper at Chances Are for S25 per couple (couples only), reduced drink prices, and a 1 a.m. breakfast included. Dooley's is featuring the Wooles for S7.50 per person (including a split of pagne, party favors, and h'ors doeurves). An appearance by the unbelievable Shakin' Jake Woods is also rumored. The Golden Falcon offers the Ultra Mystics from Detroit for $3.50 a head. If you're planning to go to Detroit, the Savoy has comedian songwriter Martin Muil and his Fabulous Furniture and the Jim Schwall Blues Band (formerly of the Siegel Schwall Blues Band out of Chicago). At the Michigan Palace is the man who Eric Clapton called the best guitar player in the world, Roy Buchanan. ■ straignt irom tne niiis of Kentucky via Boston. The Friends Road Show will be appearing, and disappearing at the Dunrovin Country Club in Livonia, for a high price of $20 per person. You can eat and drink as much as you like though. Well, take your choice, have a real goöd time, live it up, the worst is yet to come OR New Year's Eve comes but once a year unless you're Jewish or Chinese, OR . . . Other happenings for the next two weeks are sparse. The Silvertones will be playing the Blind Pig Jan. 2. Here we have a fine conglomérate of local musicians into blues-swing-country-jazzgroove all in one show. George Bedard on guitar can play just about anything your auditory nerves require or desire. George, as well as Steve Nardella (mouth harp and guitar) are vets of the Vipers and the Kemtones, now defunct Blind Pig favorites. On drums is Tom MacDermott, another former Kemtoner, and the bottom line bass is provided by Cari Hildebrand. Definitely a sound worth checking out. DETROIT JAMS . . . for a night of great Detroit jazz there's the Lyman Woodard Organizaron at the Savoy Friday, Dec. 20. Bob Seger will be doing it with feeling at the Michigan Palace, Friday, Dec. 27. TV . . . if you can get around the holiday hype, the tube has some good music shows on this week. Dr. John and Professor Longhair, one of New Orleans' little known early funk blues singerspiano players, "Ball the Wall" are onChannel 56 Dec. 31,1 Opm. James Brown, Godfather of Soul is on Ch. 7 on Dec. 20 at 11 :30pm. Then right after that, will be a show of soul with Gladys Knight and the Pips, Kool and the Gang and the O'Jays, Ch. 4, at 1 a.m.