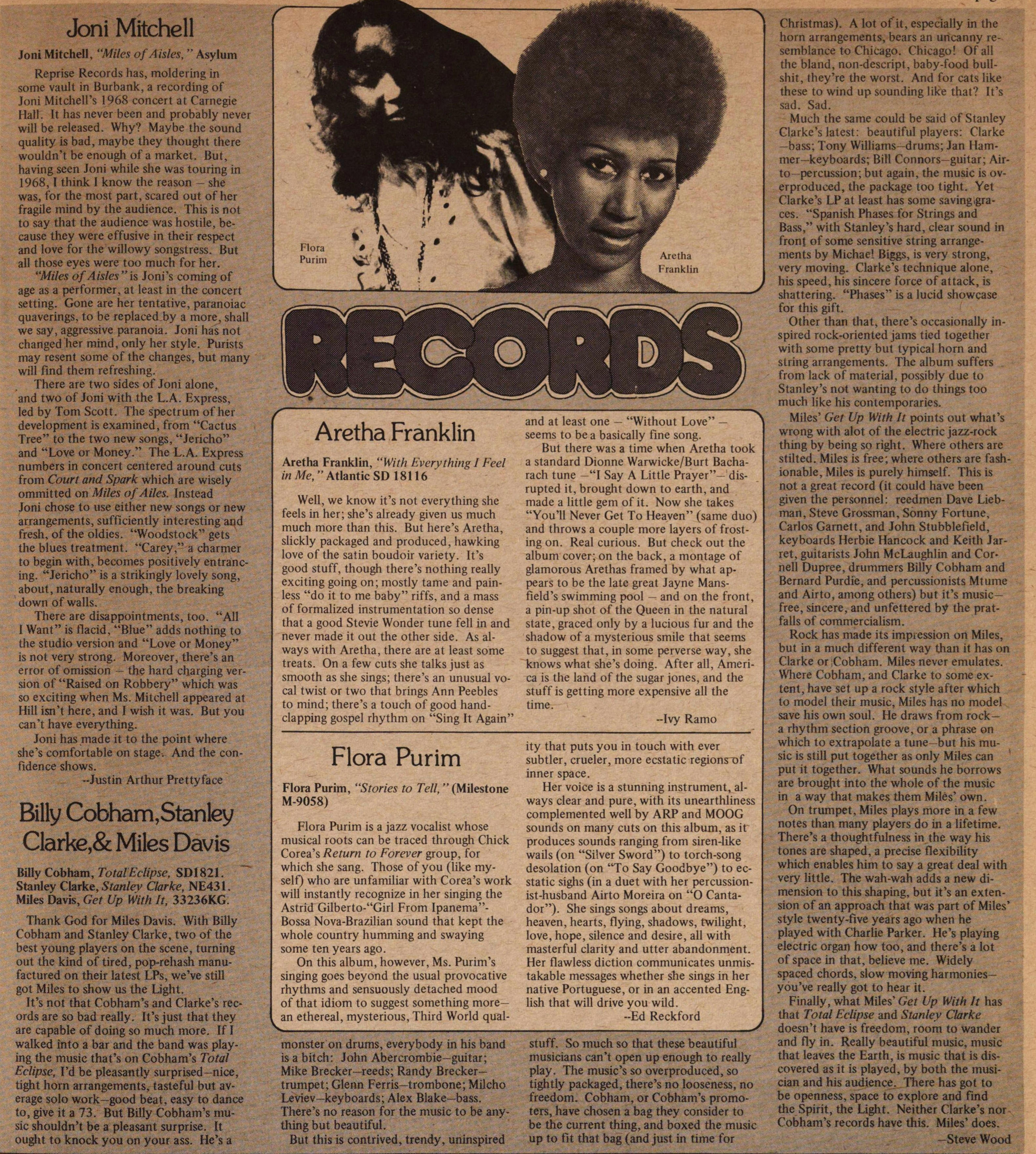 Thank God for Miles Davis. With Billy Cobham and Stanley Clarke, two of the best young players on the scene, turning out the kind of tired, pop-rehash manufactured on their latest LP's, we've still got Miles to show us the Light.

It's not that Cobham's and Clarke's records are so bad really. It's just that they are capable of doing so much more. If I walked into a bar and the band was playing the music that's on Cobham's Total Eclipse, I'd be pleasantly surprised- nice, tight hom arrangements, tasteful but average solo work-good beat, easy to dance to, give it a 73. But Billy Cobham's music shouldn't be a pleasant surprise. It ought to knock you on your ass. He's a monster on drums, everybody in his band is a bitch: John Abercrombie-guitar; Mike Brecker-reeds; Randy Brecker-trumpet; Glenn Ferris-trombone; Milcho Leviev-keyboards; Alex Blake-bass. There's no reason for the music to be anytliing but beautiful.

But this is contrived, trendy, uninspired stuff. So much so that these beautiful musicians can't open up enough to really play. The music's so overproduced, so tightly packaged, there's no looseness, no freedom. Cobham, or Cobham's promoters, have chosen a bag they consider to be the current thing, and boxed the music up to fit that bag (and just in time for Christmas). A lot of it, especially in the hom arrangements, bears an uncanny rescmhlance to Chicago. Chicago! Of all the bland, non-descript, baby-food bullshit, they're the worst. And for cats like these to wind up sounding like that? It's sad. Sad.

Much the same could be said of Stanley Clarke's latest: beautiful players: Clarke-bass; Tony Williams-drums; Jan llammer-keyboards; Bill Connors-guitar; Airto-percussion; but again, the music is overproduced, the package too tight. Yet Clarke's LP at least has some saving, graces. "Spanish Phases for Strings and Bass," with Stanley's hard, clear sound in front of some sensitive string arrangements by Michael Biggs, is very strong, very moving. Clarke's technique alone, his speed, his sincere force of attack, is shattering. "Phases" is a lucid showcase for this gift.

Other than that, there's occasionally inspired rock-oriented jams tied together with some pretty but typical horn and string arrangements. The album suffers from lack of material, possibly due to Stanley's not wanting to do things too much like his contemporaries.

Miles' Get Up With It points out what's wrong with alot of the electric jazz-rock thing by being so right. Where others are stilted. Miles is free; where others are fashionable, Miles is purely himself. This is not a great record (it could have been given the personnel: reedmen Dave Liebman, Steve Grossman, Sonny Fortune, Carlos Garnett, and John Stubblefield, keyboards Herbie Hancock and Keith Jarret, guitarists John McLaughlin and Cornell Dupree, drummers Billy Cobham and Bernard Purdie, and percussionists Mtume and Airto, among others) but it's music- free, sincere, and unfettered by the pratfalls of commercialism.

Rock has made its impression on Miles, but in a much different way than it has on Clarke or Cobham. Miles never emulates. Where Cobham, and Clarke to some extent, have set up a rock style after which to model their music, Miles has no model save his own soul. He draws from rock- a rhythm section groove, or a phrase on which to extrapolate a tune but his music is still put together as only Miles can put it together. What sounds he borrows are brought into the whole of the music in a way that makes them Miles' own.

On trumpet, Miles plays more in a few notes than many players do in a lifetime. There's a thoughtfulness in the way his tones are shaped, a precise flexibility which enables him to say a great deal with very little. The wah-wah adds a new dimension to this shaping, but it's an extension of an approach that was part of Miles style twenty-fïve years ago when he played with Chariie Parker. He 's playing electric organ how too, and there's a lot of space in that, believe me. Widely spaced chords, slow moving harmonies- you've really got to hear it.

Finally, what Miles Get Up With It has that Total Eclipse and Stanley Clarke doesn't have is freedom, room to wander and fiy in. Really beautiful music, music that leaves the Earth, is music that is discovered as i t is played, by both the musician and his audience. There has got to be openness, space to explore and find the Spirit, the Light. Neither Clarke's nor Cobham 's records have this. Miles' does.