Radio King & His Court Of Rhythm 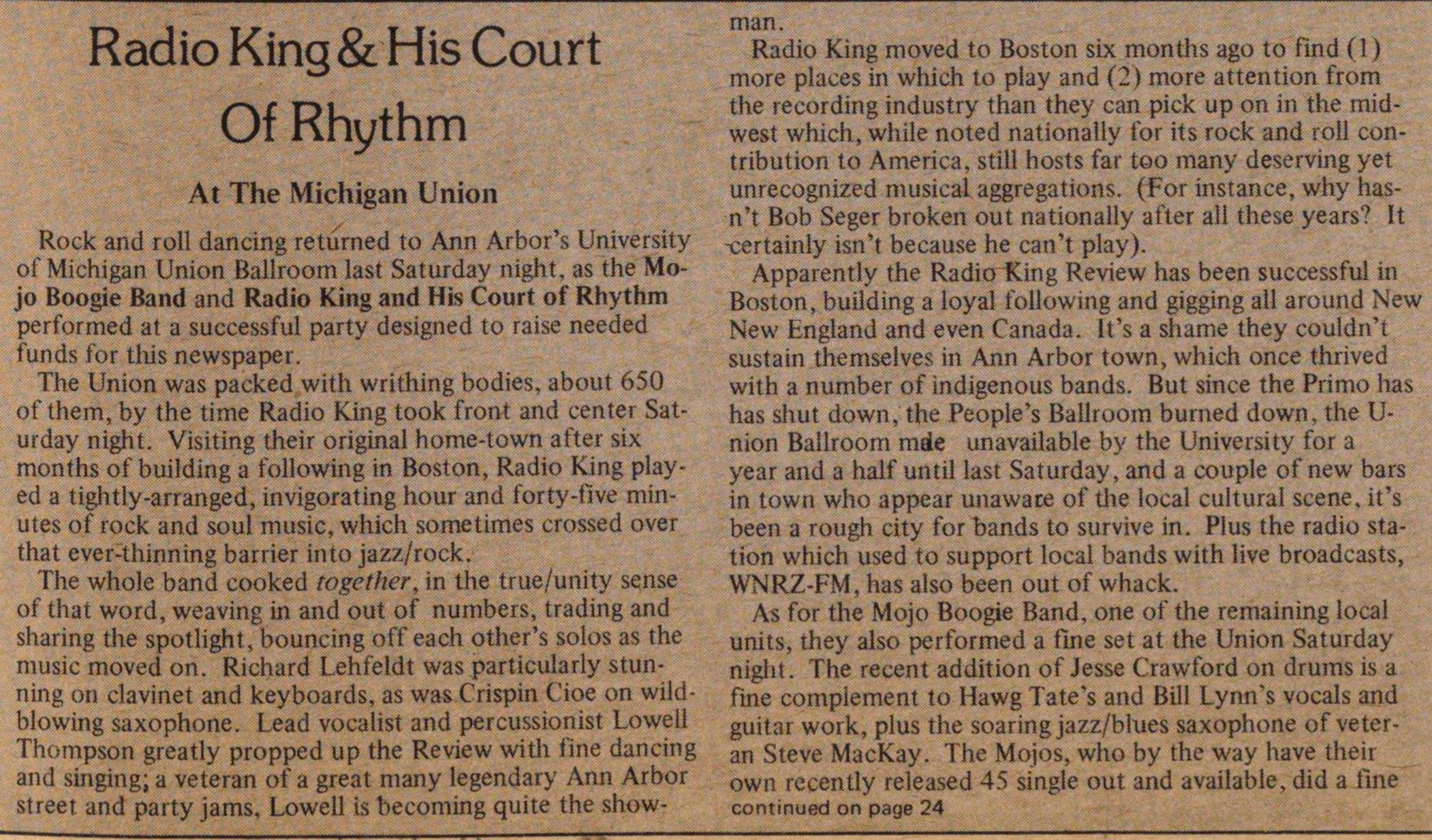 Rock and roll dancing returned to Ann Arbor's University of Michigan Union Ballroom last Saturday night, as the Mojo Boogie Band and Radio King and His Court of Rhythm performed at a successful party designed to raise needed funds for this newspaper. The Union was packed with writhing bodies, about 650 of them, by the time Radio King took front and center Saturday night. Visiting their original home-town after six months of building a following in Boston, Radio King played a tightly-arranged, invigorating hour and forty-five minutes of rock and soul music, which sometimes crossed over that ever-thinning barrier into jazz.rock. The whole band cooked together, in the trueunity sense of that word, weaving in and out of numbers, trading and sharing the spotlight, bouncing off each other's solos as the music moved on. Richard Lehfeldt was particularly stunning on clavinet and keyboards, as was Crispin Cioe on wildblowing saxophone. Lead vocalist and percussionist Loweü Thompson greatly propped up the Review with fine dancing and singing; a veteran of a great many legendary Ann Arbor street and party jams. Lowell is becoming quite the man. Radio King moved to Boston six months ago to find ( 1 ) more places in which to play and (2) more attention from the recording industry than they can piek up on in the midwest which, while noted nationally for its rock and roll contribution to America, stiU hosts far too many deserving yet unrecognized musical aggregations. (For instance, why hasn't Bob Seger broken out nationally after all these years? It -certainly isn't because he can't play). Apparently the Radio 1Cing Review has been successful in Boston, building a loyal following and gigging all around New New England and even Canada, lt's a shame they couldn't sustain themselves in Ann Arbor town, which once thrived with a number of indigenous bands. But since the Primo has has shut down, the People's Ballroom burned down, the Union Ballroom mde unavailable by the University for a year and a half until last Saturday , and a couple of new bars in town who appear unawace of tlie local cultural scene. it's been a rough city for bands to survive in. Plus the radio station which used to support local bands with live broadcasts, WNRZ-FM, has also been out of whack. As for the Mojo Boogie Band, one of the remaining local units, they also performed a fine set at the Union Saturday niglit. The recent addition of Jesse Crawford on drums is a fine complement to Hawg Tate's and Bill Lynn's vocals and guitar work, plus the soaring jazzbhies saxophone of veteran Steve MacKay. The Mojos, who by the way have theii own recently released 45 single out and available, did a fine continued on page 24