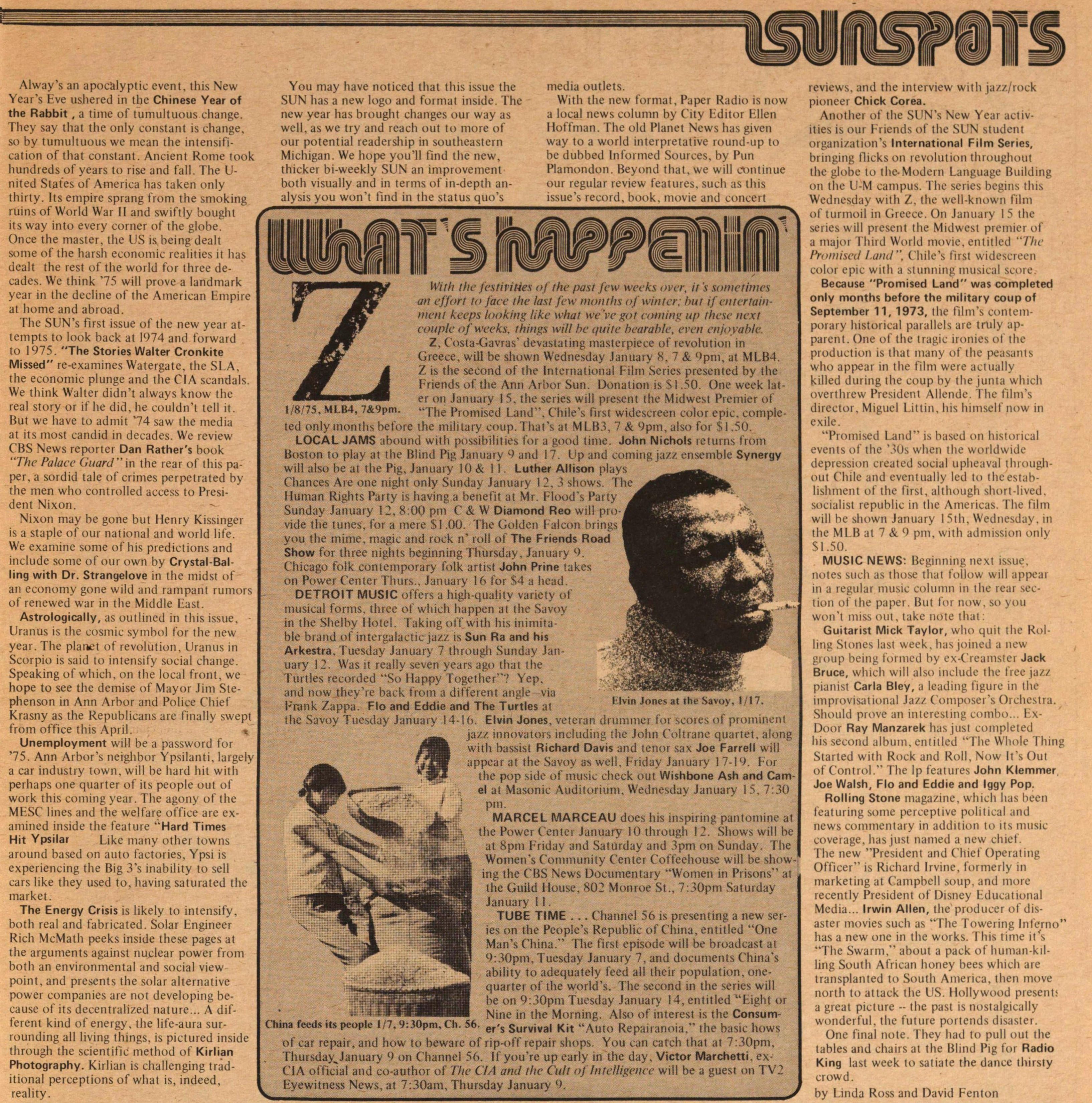 Alway's an apocalyptic event, this New Year's Eve ushered in the Chinese Year of the Rabbit, a time of tumultuous change. They say that the only constant is change, so by tumultuous we mean the intensification of that constant. Ancient Rome took hundreds of years to rise and fall. The United States of America has taken only thirty. lts empire sprang from the smoking ruins of World War II and swiftly bought its way into every corner of the globe. Once the master, the US is being dealt some of the harsh economic realities it has dealt the rest of the world for three decades. We think '75 will prove a landmark year in the decline of the American Empire at home and abroad.

The SUN's first issue of the new year attempts to look back at 1974 and forward to 1975. "The Stories Walter Cronkite Missed" re -examines Watergate, the CIA, the economic plunge and the CIA scandals. We think Walter didn't always know the real story or if he did, he couldn't tell it. But we have to admit '74 saw the media at its most candid in decades. We review CBS News reporter Dan Rather's book "The Palace Guard" in the rear of this paper, a sordid tale of crimes perpetrated by the men who controlled access to President Nixon.

Nixon may be gone but Henry Kissinger is a staple of our national and world life. We examine some of his predictions and include some of our own by Crystal-Balling with Dr. Strangelove in the midst of an economy gone wild and rampant rumors of renewed war in the Middle East.

Astrologically, as outlined in this issue, Uranus is the cosmic symbol for the new year. The planet of revolution, Uranus in Scorpio is said to intensify social change. Speaking of which, on the local front, we hope to see the demise of Mayor Jim Stephenson in Ann Arbor and Police Chief Krasny as the Republicans are finally swept from office this April.

Unemployment will be a password for '75. Ann Arbor's neighbor Ypsilanti, largely a car industry town, will be hard hit with perhaps one quarter of its people out of work this coming year. The agony of the MESC lines and the welfare office are examined inside the feature "Hard Times Hit Ypsilanti". Like many other towns around based on auto factories, Ypsi is experiencing the Big 3's inability to sell cars like they used to, having saturated the market.

The Energy Crisis is likely to intensify, both real and fabricated. Solar Engineer Rich McMath peeks inside these pages at the arguments against nuclear power from both an environmental and social view point, and presents the solar alternative power companies are not developing because of its decentralized nature... A different kind of energy, the life-aura surrounding all living things, is pictured inside through the scientific method of Kirlian Photography. Kirlian is challenging traditional perceptions of what is, indeed, reality.

You may have noticed that this issue the SUN has a new logo and format inside. The new year has brought changes our way as well, as we try and reach out to more of our potential readership in southeastern Michigan. We hope you'll find the new, thicker bi-weekly SUN an improvement both visually and in terms of in-depth analysis you won't find in the status quo's media outlets.

With the new format, Paper Radio is now a local news column by City Editor Ellen Hoffman. The old Planet News has given way to a world interpretative round-up to be dubbed Informed Sources, by Pun Plamondon. Beyond that, we will continue our regular review features, such as this issue's record, book, movie and concert reviews, and the interview with jazz/rock pioneer Chick Corea.

Anoter of tge SUN's New Year activities is our Friends of the SUN student organization's International Film Series, bringing flicks on revolution throughout the globe to Modern Language Building on the U-M campus. The series begin this Wednesday with Z, the well-known film of turmoil in Greece. On January 15 the series will present the Midwest premier of a major Third World movie, entitled "The Promised Land", Chile's first widescreen color epic with a stunning musical score.

Because "Promised Land" was completed only months before the military coup of September 11, 1973, the film's contemporary historical parallels are truly apparent. One of the tragic ironies of the production is that many of the peasants who appear in the film were actually killed during the coup by the junta which overthrew President Allende. The film's director, Miguel Littin, is himself now in exile.

"Promised Land" is based on historical events of the '30s when the worldwide depression created social upheaval throughout Chile and eventually led to the establishment of the first, although short -lived, socialist republic in the Americas. The film will be shown January  15th, Wednesday, in the MLB at 7 & 9 pm, with admission only $1.50.

MUSIC NEWS: Beginning next issue, notes such as those that follow will appear in a regular music column in the rear section of the paper. But for now, so you won't miss out, take note that : Guitarist Mick Taylor, who quit the Rolling Stones last week, has joined a new group being formed by ex-Creamster Jack Bruce, which will also include the free jazz pianist Carla Bley, a leading figure in the improvisational Jazz Composer's Orchestra. Should prove an interesting combo... Ex-Door Ray Manzarek has just completed his second album, entitled "The Whole Thing Started with Rock and Roll, Now It's Out of Control." The lp features John Klemmer, Joe Walsh, Flo and Eddie and Iggy Pop.

Rolling Stone magazine, which has been featuring some perceptive political and news commentary in addition to its music coverage, has just named a new chief. The new "President and Chief Operating Officer" is Richard Irvine, formerly in marketing at Campbell soup, and more recently President of Disney Educational Media... Irwin Allen, the producer of disaster movies such as "The Towering Inferno" has a new one in the works. This time its "The Swarm," about a pack of human-killing South African honey bees which are transplanted to South America, then move north to attack the US. Hollywood present; a great picture - the past is nostalgically wonderful, the future portends disaster.

One final note. They had to pull out the tables and chairs at the Blind Pig for Radio King last week to satiate the dance thirsty crowd.

by Linda Ross and David Fenton