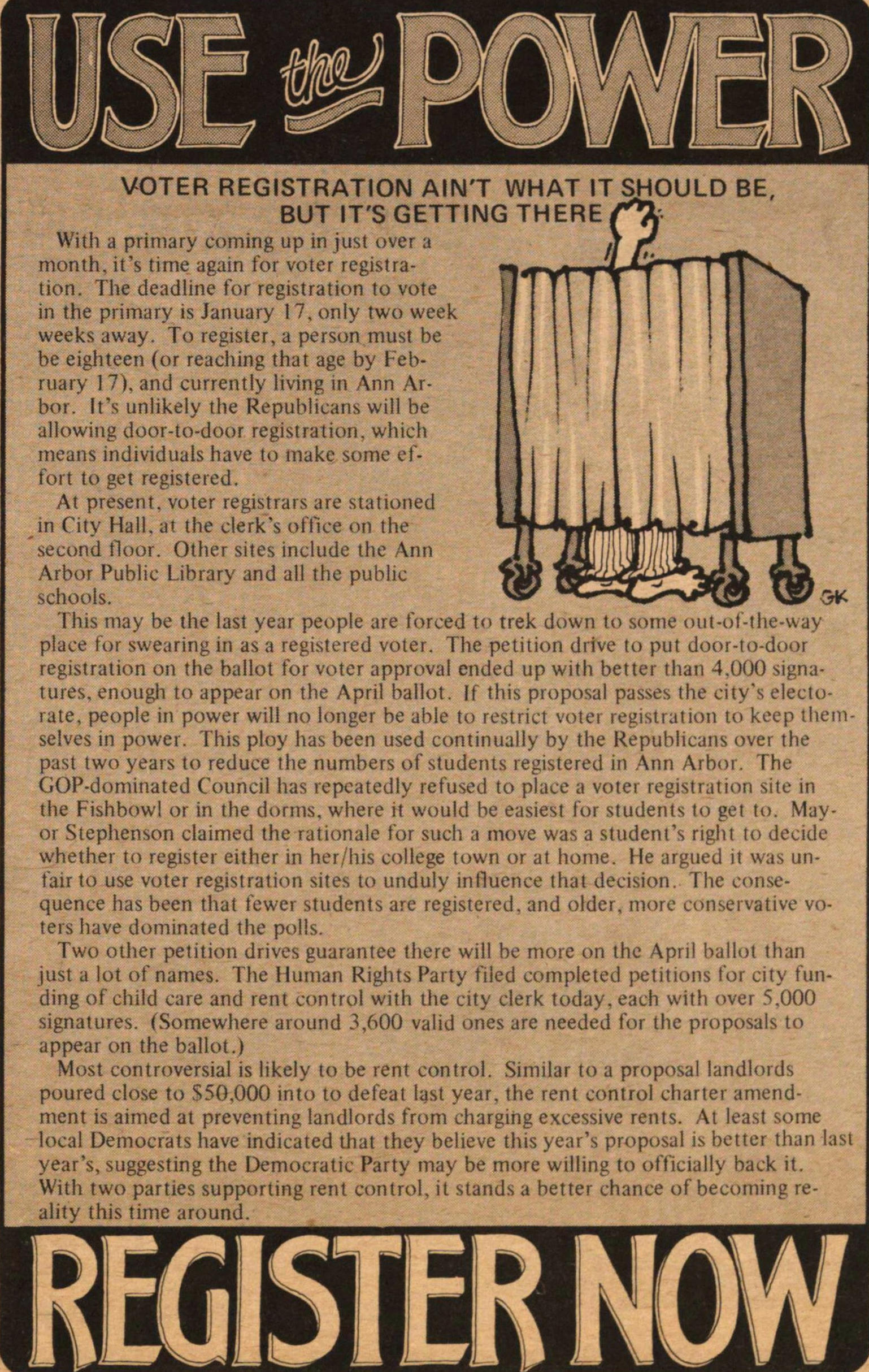 VOTER REGISTRATION AIN'T WHAT IT SHOULD BE, BUT IT'S GETTING THERE.

With a primary coming up in just over a month, it's time again for voter registration. The deadline for registration to vote in the primary is January 17, only two week weeks away. To register, a person must be be eighteen (or reaching that age by February 17), and currently living in Ann Arbor. t's unlikely the Republicans will be Allowing door-to-door registration, which means individuals have to make some effort to get registered.

At present, voter registrars are stationed in City Hall, at the clerk's office on the second floor. Other sites include the Ann Arbor Public Library and all the public schools.

This may be the last year people are forced to trek down to some out-of-the-way place for swearing in as a registered voter. The petition drive to put door-to-door registration on the ballot for voter approval ended up with better than 4,000 signatures, enough to appear on the April ballot. If this proposal passes the city's electorate, people in power will no longer be able to restrict voter registration to keep themselves in power. This ploy has been used continually by the Republicans over the past two years to reduce the numbers of students registered in Ann Arbor. The GOP-dominated Council has repeatedly refused to place a voter registration site in the Fishbowl or in the dorms, where it would be easiest for students to get to. Mayor Stephenson claimed the rationale tor such a move was a student's right to decide whether to register either in her/his college town or at home. He argued it was unfair to use voter registration sites to unduly influence that decision. The consequence has been that fewer students are registered, and older, more conservative voters have dominated the polls.

Two other petition drives guarantee there will be more on the April ballot than just a lot of names. The Human Rights Party filed completed petitions for city funding of child care and rent control with the city clerk today, each with over 5,000 signatures. (Somewhere around 3,600 valid ones are needed for the proposals to appear on the ballot.)

Most controversial is likely to be rent control. Similar to a proposal landlords poured close to $50,000 into to defeat last year, the rent control charter amendment is aimed at preventing landlords from charging excessive rents. At least some local Democrats have indicated that they believe this year's proposal is better than last year's, suggesting the Democratic Party may be more willing to officially back it. With two parties supporting rent control, it stands a better chance of becoming reality this time around.