Astrology For The New Year: A Time Off Change 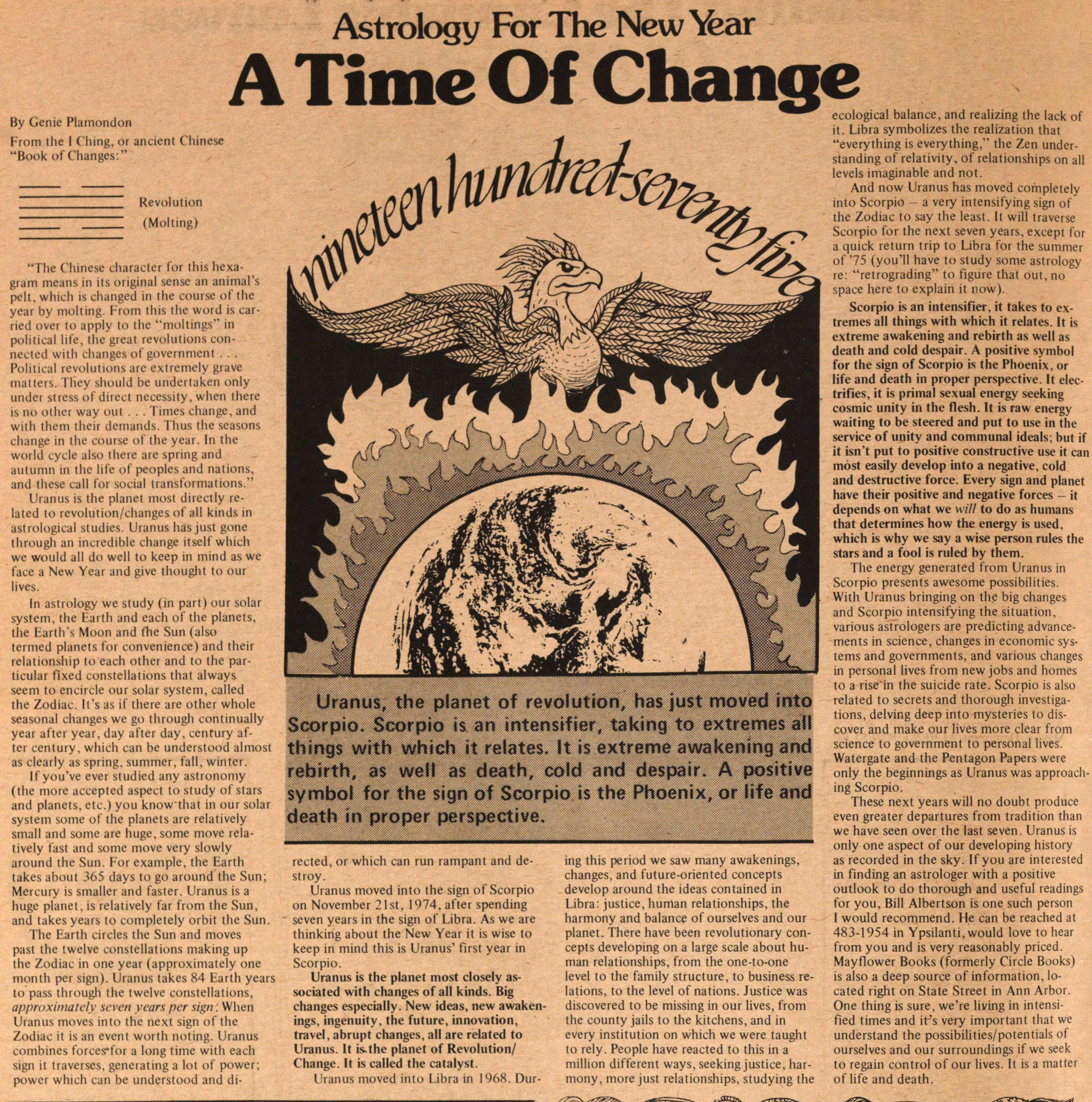 From the I Ching, or ancient Chinese "Book of Changes: [symbol] Revolution (Molting)

"The Chinese character for this hexagram means in its original sense an animal's pelt, which is changed in the course of the year by molting. From this the word is carried over to apply to the "moltings" in political life, the great revolutions connected with changes of government... Political revolutions are extremely grave matters. They should be undertaken only under stress of direct necessity, when there is no other way out...Times change, and with them their demands. Thus the seasons change in the course of the year. In the world cycle also there are spring and autumn in the life of peoples and nations, and these call for social transformations."

Uranus is the planet most directly related to revolution/changes of all kinds in astrological studies. Uranus has just gone through an incredible change itself which we would all do well to keep in mind as we face a New Year and give thought to our lives.

In astrology we study (in part) our solar system, the Earth and each of the planets, the Earth's Moon and the Sun (also termed planets for convenience) and their relationship to each other and to the particular fixed constellations that always seem to encircle our solar system, called the Zodiac. It's as if there are other whole seasonal changes we go through continually year after year, day after day, century after century, which can be understood almost as clearly as spring, summer, fall, winter.

If you've ever studied any astronomy (the more accepted aspect to study of stars and planets, etc.) you know that in our solar system some of the planets are relatively small and some are huge, some move relatively fast and some move very slowly around the Sun. For example, the Earth takes about 365 days to go around the Sun; Mercury is smaller and faster. Uranus is a huge planet, is relatively far from the Sun, and takes years to completely orbit the Sun.

The Earth circles the Sun and moves past the twelve constellations making up the Zodiac in one year (approximately one month per sign). Uranus takes 84 Earth years to pass through the twelve constellations, approximately seven years per sign. When Uranus moves into the next sign of the Zodiac it is an event worth noting. Uranus combines forces for a long time with each sign it traverses, generating a lot of power; power which can be understood and directed, or which can run rampant and destroy.

Uranus moved into the sign of Scorpio on November 21st,1974, after spending seven years in the sign of Libra. As we are thinking about the New Year it is wise to keep in mind this is Uranus' first year in Scorpio.

Uranus is the planet most closely associated with changes of all kinds. Big changes especially. New ideas, new awakenings, ingenuity, the future, innovation, travel, abrupt changes, all are related to Uranus. It is the planet of Revolution/Change. It is called the catalyst.

Uranus moved into Libra in 1968. During this period we saw many awakenings, changes, and future-oriented concepts develop around the ideas contained in Libra: justice, human relationships, the harmony and balance of ourselves and our planet. There have been revolutionary concepts developing on a large scale about human relationships, from the one-to-one level to the family structure, to business relations, to the level of nations. Justice was discovered to be missing in our lives, from the county jails to the kitchens, and in every institution on which we were taught to rely. People have reacted to this in a million different ways, seeking justice, harmony, more just relationships, studying the ecological balance, and realizing the lack of it. Libra symbolizes the realization that "everything is everything," the Zen understanding of relativity, of relationships on all levels imaginable and not.

And now Uranus has moved completely into Scorpio - a very intensifying sign of the Zodiac to say the least. It will traverse Scorpio for the next seven years, except for a quick return trip to Libra for the summer of '75 (you'll have to study some astrology re: "retrograding" to figure that out, no space here to explain it now).

Scorpio is an intensifier, it takes to extremes all things with which it relates. It is extreme awakening and rebirth as well as death and cold despair. A positive symbol for the sign of Scorpio is the Phoenix, or life and death in proper perspective. It electrifies, it is primal sexual energy seeking cosmic unity in the flesh. It is raw energy waiting to be steered and put to use in the service of unity and communal ideals; but if it isn't put to positive constructive use it can most easily develop into a negative, cold and destructive force. Every sign and planet have their positive and negative forces - it depends on what we will to do as humans that determines how the energy is used, which is why we say a wise person rules the stars and a fool is ruled by them.

The energy generated from Uranus in Scorpio presents awesome possibilities. With Uranus bringing on the big changes and Scorpio intensifying the situation, various astrologers are predicting advancements in science, changes in economic systems and governments, and various changes in personal lives from new jobs and homes to a rise in the suicide rate. Scorpio is also related to secrets and thorough investigations, delving deep into mysteries to discover and make our lives more clear from science to government to personal lives. Watergate and the Pentagon Papers were only the beginnings as Uranus was approaching Scorpio.

These next years will no doubt produce even greater departures from tradition than we have seen over the last seven. Uranus is only one aspect of our developing history as recorded in the sky. If you are interested in finding an astrologer with a positive outlook to do thorough and useful readings for you, Bill Albertson is one such person I would recommend. He can be reached at 483-1954 in Ypsilanti, would love to hear from you and is very reasonably priced. Mayflower Books (formerly Circle Books) is also a deep source of information, located right on State Street in Ann Arbor. One thing is sure, we're living in intensified times and it's very important that we understand the possibilities potentials of ourselves and our surroundings if we seek to regain control of our lives. It is a matter of life and death.

Uranus, the planet of revolution, has just moved into Scorpio. Scorpio is an intensifier, taking to extremes all things with which it relates. It is extreme awakening and rebirth, as well as death, cold and despair. A positive symbol for the sign of Scorpio is the Phoenix, or life and death in proper perspective.