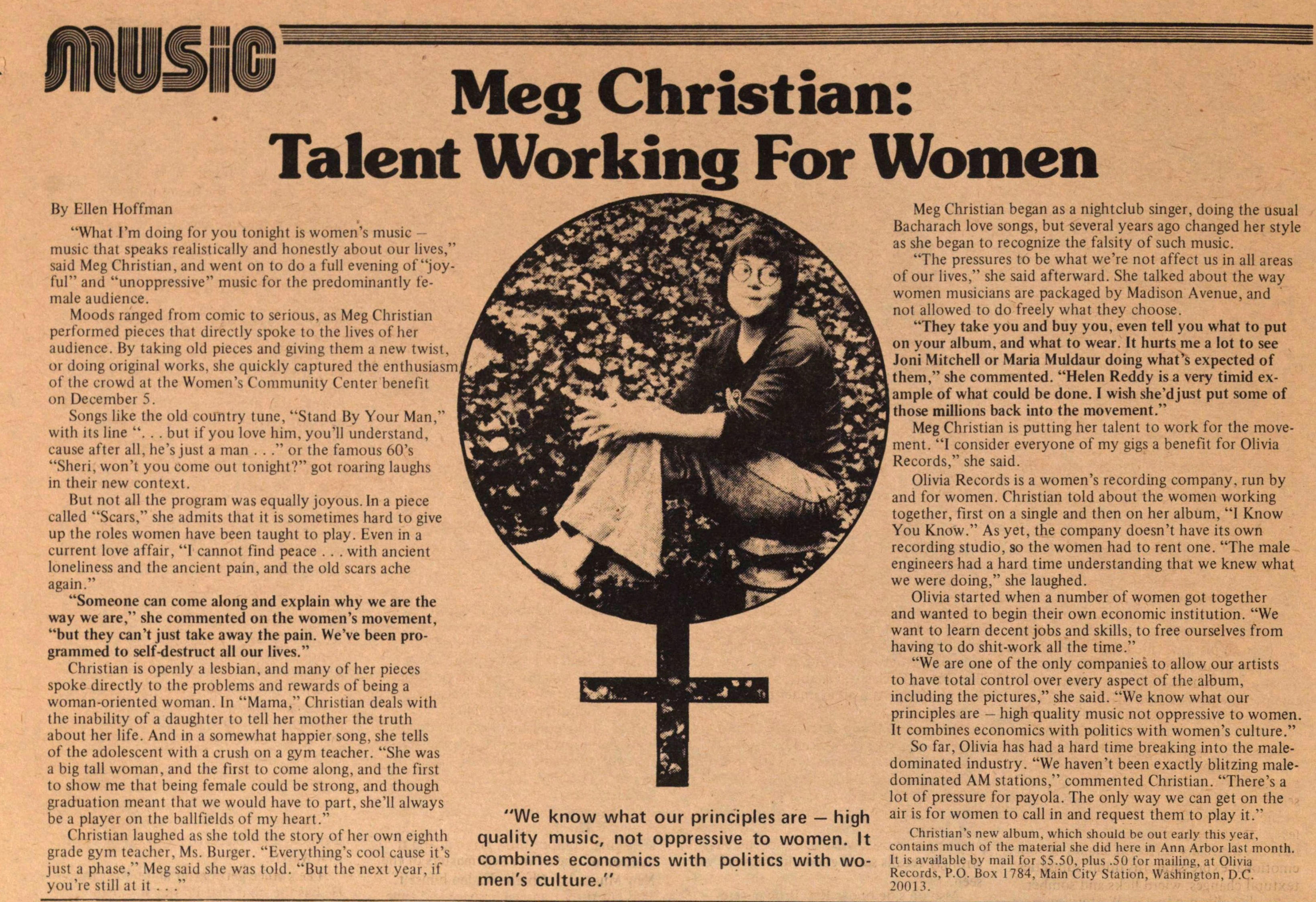 "What I'm doing for you toniglit is women's music - music that speaks realistically and honestly about our lives," said Meg Christian, and went on to do a t'ull evening of "joyful" and "unoppressive" music for the predominantly female audience. Moods ranged f rom comic to serious, as Meg Christian performed pieccs that directly spoke to the lives of lier audience. By taking old pieces and giving them a new twist, or doing original works, she quickly captured the enthusiasmj of the crowd at the Women's ('ommunity ('enter benefit j on December 5. Songs like the old country tune, "Stand By Your Man," with its line ". . . but if you love him, you'll understand, cause after all, he's just a man . . ." or the famous 60's "Sheri, won 't you come out tonight?" got roaring lauglis in their new context. But not all the program was equally joyous. In a piece called "Sears," she admits that it is sometimes hard to give up the roles women have been tauglit to play. Even in a current love affair, "I cannot find peace . . . with ancient loneliness and the ancient pain, and the old scars ache again." "Someone can come along and explain why we are the way we are," she commented on the women's movement, "but they can't just take away the pain. We've been programmed to self-destruct all our lives." Christian is openly a lesbian, and many of her pieces spoke directly to the problems and rewards of being a woman-oriented woman. In "Mama," Christian deals with the inability of a daughter to teil her mother the truth about her life. And in a somewhat happier song, she tells of the adolescent with a crush on a gym teacher. "She was a big tall woman, and the first to come along, and the first to show me that being female could be strong, and though graduation meant that we would have to part, she'll always be a player on the ballfields of my heart." Christian laughed as she told the story of her own eighth grade gym teacher, Ms. Burger. "Everything's cool cause it's just a phase," Meg said she was told. "But the next year, if you're still at it . . ." Meg Christian began as a nightclub singer, doing the usual Bacharach love songs, but several years ago changed her style as she began to recognize the falsity of such music. "The pressures to be what we're not affect us in all areas of our lives," she said afterward. She talked about the way women musicians are packaged by Madison Avenue, and not allowed to do freely what they choose. "They take you and buy you, even teil you what to put on your album, and what to wear. It hurts me a lot to see I Joni Mitchell or Maria Muldaur doing what's expected of l them," she commented. "Helen Reddy is a very timid ex1 ampie of what could be done. I wish she'djust put some of I those millions back into the movement." I Meg Christian is putting her talent to work for the move' ment. "1 consider everyone of my gigs a benefit for Olivia Records," she said. Olivia Records is a women 's recording company. run by and for women. Christian told about the women working together, first on a single and then on her album, "1 Know You Know." As yet, the company doesn't have its own recording studio, so the women had to rent one. "The male engineers had a hard time understanding that we knew what we were doing," she laughed. Olivia started when a number of women got together and wanted to begin their own economie institution. "We want to learn decent jobs and skills, to free ourselves from having to do shit-work all the time." "We are one of the only companies to allow our artists to have total control over every aspect of the album, including the pictures," she said. "We know what our principies are - high quality music not oppressive to women. It combines economics with politics with women's culture." So far, Olivia has had a hard time breaking into the maledominated industry. "We haven 't been exactly blitzing maledominated AM stations," commented Christian. "There's a lot of pressure for payóla. The only way we can get on the air is for women to cali in and request them to play it." Christian's new album, which should be out early this year, contains much of the material she did here in Ann Arbor last month. It is available by mail for S5.5O, plus .50 tor mailing, at Olivia Records. P.O. Box 1 784, Main City Station, Washington, D.C 20013. "We know what our principies are - high quality music, not oppressive to women. It combines economics with politics with women's culture."