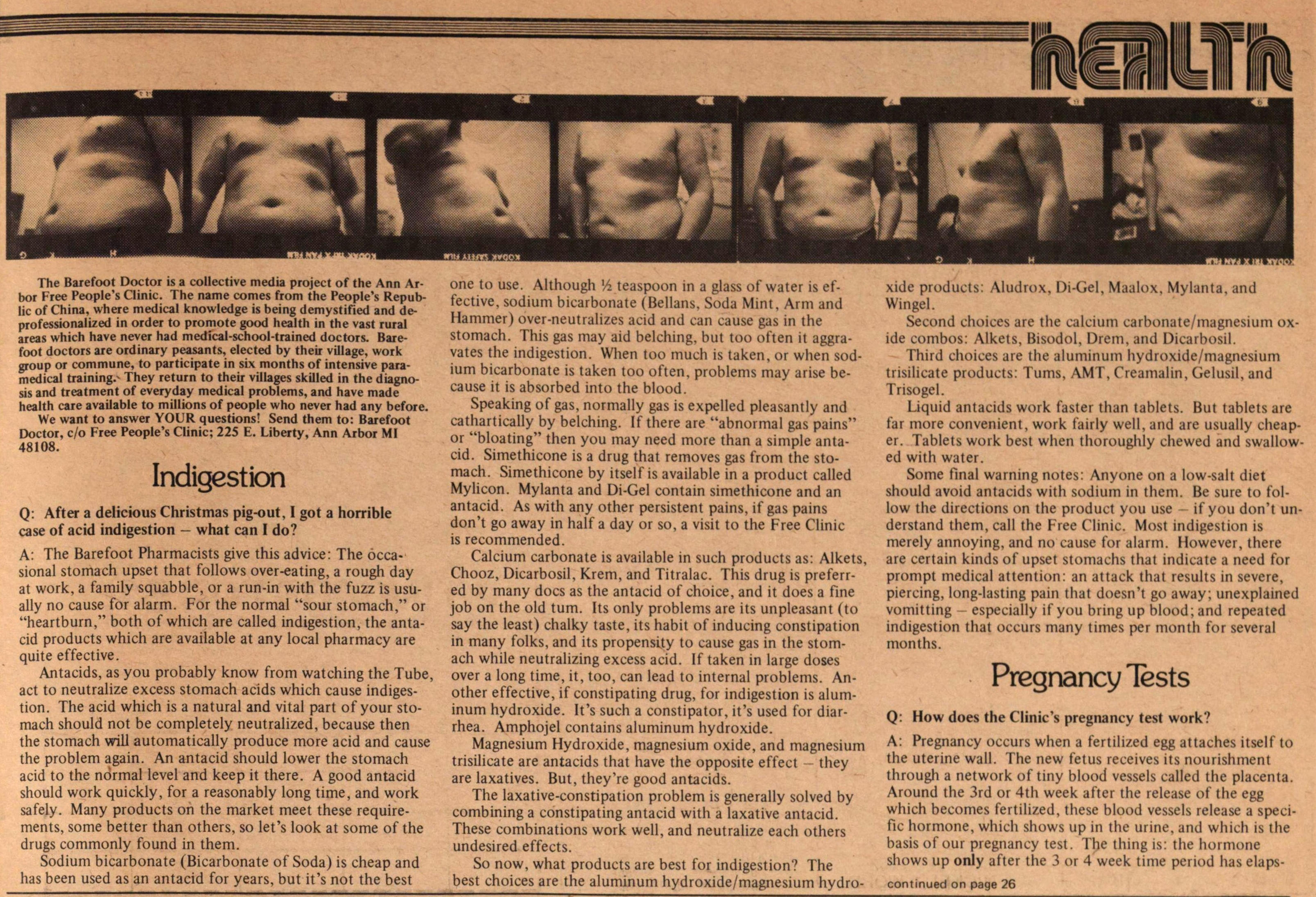 The Barefoot Doctor is a collective media project of the Ann Arbor Free People's Clinic. The name comes from the People's Republic of China, where medical knowledge is being demystified and deprofessionalized in order to promote good health in the vast rural areas which have never had medical-school-trained doctors. Barefoot doctors are ordinary peasants, elected by their village, work group or commune, to participate in six months of intensive paramedical training. They return to their villages skilled in the diagnosis and treatment of everyday medical problems, and have made health care available to millions of people who never had any before.

Q: After a delicious Christmas pig-out, I got a horrible case of acid indigestion - what can I do?

A: The Barefoot Pharmacists give this advice: The occasional stomach upset that follows over-eating, a rough day at work, a family squabble, or a run-in with the fuzz is usually no cause for alarm. For the normal "sour stomach," or "heartburn," both of which are called indigestion, the antacid products which are available at any local pharmacy are quite effective.

Antacids, as you probably know from watching the Tube, act to neutralize excess stomach acids which cause indigestion. The acid which is a natural and vital part of your stomach should not be completely neutralized, because then the stomach will automatically produce more acid and cause the problem again. An antacid should lower the stomach acid to the normal level and keep it there. A good antacid should work quickly, for a reasonably long time, and work safely. Many products on the market meet these requirements, some better than others, so let's look at some of the drugs commonly found in them.

Sodium bicarbonate (Bicarbonate of Soda) is cheap and has been used as an antacid for years, but it's not the best one to use. Although 1/2 teaspoon in a glass of water is effective, sodium bicarbonate (Bellans, Soda Mint, Arm and Hammer) over-neutralizes acid and can cause gas in the stomach. This gas may aid belching, but too often it aggravates the indigestion. When too much is taken, or when sodium bicarbonate is taken too often, problems may arise because it is absorbed into the blood.

Speaking of gas, normally gas is expelled pleasantly and cathartically by belching. If there are "abnormal gas pains" or "bloating" then you may need more than a simple antacid. Simethicone is a drug that removes gas from the stomach. Simethicone by itself is available in a product called Mylicon. Mylanta and Di-Gel contain simethicone and an antacid. As with any other persistent pains, if gas pains don't go away in half a day or so, a visit to the Free Clinic is recommended.

Calcium carbonate is available in such products as: Alkets, Chooz, Dicarbosil, Krem, and Titralac. This drug is preferred by many does as the antacid of choice, and it does a fine job on the old turn. lts only problems are its unpleasant (to say the least) chalky taste, its habit of inducing constipation in many folks, and its propensity to cause gas in the stomach while neutralizing excess acid. If taken in large doses over a long time, it, too, can lead to internal problems. Another effective, if constipating drug, for indigestion is aluminum hydroxide. It's such a constipator, it's used for diarrhea. Amphojel contains aluminum hydroxide.

Magnesium Hydroxide, magnesium oxide, and magnesium trisilicate are antacids that have the opposite effect - they are laxatives. But, they're good antacids.

The laxative-constipation problem is generally solved by combining a constipating antacid with a laxative antacid. These combinations work well, and neutralize each others undesired effects.

So now, what products are best for indigestion? The best choices are the aluminum hydroxide/magnesium hydroxide products: Aludrox, Di-Gel, Maalox, Mylanta, and Wingel.

Some final warning notes: Anyone on a low-salt diet should avoid antacids with sodium in them. Be sure to follow the directions on the product you use - if you don't understand them, call the Free Clinic. Most indigestion is merely annoying, and no cause for alarm. However, there are certain kinds of upset stomachs that indicate a need for prompt medical attention: an attack that results in severe, piercing, long-lasting pain that doesn't go away; unexplained vomitting - especially if you bring up blood; and repeated indigestion that occurs many times per month for several months.

Q: How does the Clinic's pregnancy test work?

A: Pregnancy occurs when a fertilized egg attaches itself to the uterine wall. The new fetus receives its nourishment through a network of tiny blood vessels called the placenta. Around the 3rd or 4th week after the release of the egg which becomes fertilized, these blood vessels release a specific hormone, which shows up in the urine, and which is the basis of our pregnancy test. The thing is: the hormone shows up only after the 3 or 4 week time period has elapsed. Assuming that the release of the egg (ovulation) occurs usually during the second week of a woman's menstrual cycle, the test can't work one way or the other until 4 weeks later, or until after your period is two weeks late.

The test the Clinic uses is called the Two-Minute Test. It is fast, and generally reliable. When you come into the Clinic. an advocate will explain all the details of how it works to you, and if you like, you can watch the test run in our lab, and see the results for yourself.

The test only gives a positive or negative result. If positive, it cannot tell how long you've been pregnant. False positive tests are rare, but possible. More common are false negatives -that is: a situation where you really are pregnant, but the test says you're not. False negatives can be due to insufficient concentration of the hormone to which the test is sensitive, taking the test too early in the pregnancy, or certain kinds of drug use. Negative tests should be repeated in a week or if your period doesn't arrive. Your first morning's urine is the best for the test because it will have the most concentrated amount of the hormone- your urine isn't diluted with water from drinking while you're asleep. If you bring in a sample of first morning's urine to the clinic, be sure to keep it refrigerated all day. Otherwise, you can provide the sample urine when you come to the Clinic.