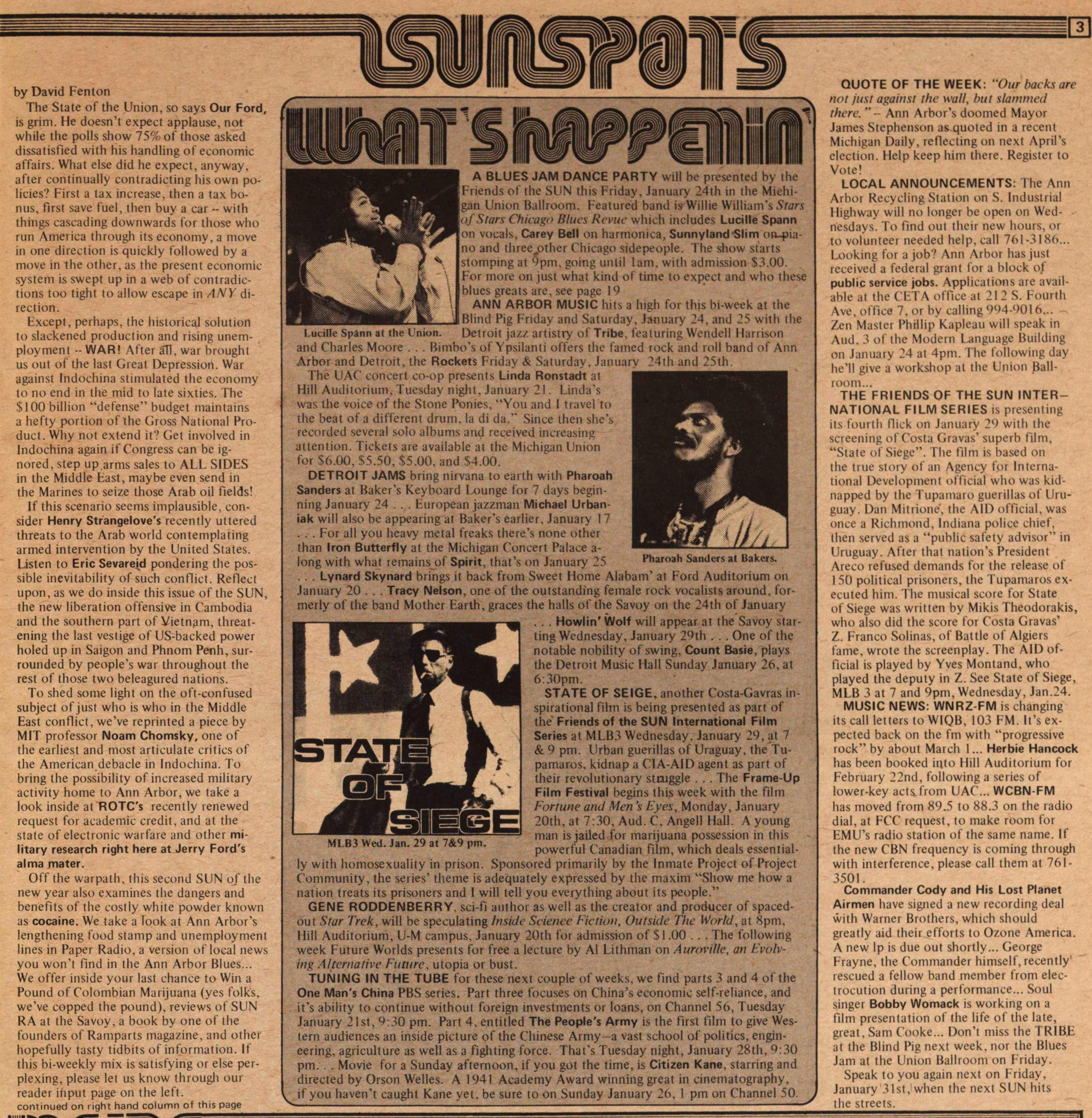 The State of the Union, so says Our Ford, is grim. He doesn't expect applause, not while the polls show 75% of those asked dissatisfied with his handling of economie affairs. What else did he expect, anyway. alter continually contradicting his own policies? First a tax increase. then a tax bonus, first save fuel, then buy a car -- with things cascading downwards for those who run America through itseconomy.a move in one direction is quickly lollowed by a move in ihe other, as the present economie system is swepi up in u web of contradictions too tight to allow escape in ANY direction. Except, perhaps, the historical solution to slackened production and rising unemployment -- WAR! After all, war brought us out of the last Great Depression. War against Indochina stimulated the economy to no end in the mid to late sixties. The $100 billion "defense" budget maintains a liefty portion of the Gross National Product. Why not extend it? Get involved in Indochina again if Congress can be ignored, step up arms sales to ALL SIDES in the Middle bast, maybe even send in the Marines to seize those Arab oil fïelds! If this scenario seems implausible, consider Henry Strangeiove's recently uttered threats to the Arab world contemplating armed intervention by the United States. Listen to Eric Sevare(d pondering the possible inevitability of such conflict. Refleet upon, as we do inside this issue of the SUN, the new liberation offensive in Cambodia and the southern part of Yietnpm, threaiening the last vestige of US-backed power holed up in Saigon and Phnom Penh, surrounded by people's war throughout the rest of those two beleagured nations. To shed some light on the oft-confused subject of just who is who in the Middle East conflict, we've reprinted a piece by MIT professor Noam Chomsky, one of the earliest and most articúlate critics of the American debacle in Indochina. To bring the possibility of increased military activity home to Ann Arbor, we take a look inside at ROTC's recently renewed request for academie credit, and at the state of eleetronic warfare and other military research right here at Jerry Ford's alma mater. Off the warpath, this second SUN of the new year also examines the dangers and benefits of the eostly white powder known as cocaine. We take a look at Ann Arbor's lengthening food stamp and unemployment lines in Paper Radio, a version of local news you won't find in the Ann Arbor Blues... We offer inside your last chance to Win a Pound of Colombian Marijuana (yes folks, we've copped the pound), reviews of SUN RA at the Savoy, a book by one of the (bunders of Ramparts magazine, and other hopefully tasty tidbitsof information. If this bi-weekly mix is satisfying or else perplexing, please lel us know through our reader input page on the left. continued on right hand column of this page QUOTE OF THE WEEK: "Our backs are nat mst ay,ahisl the wall, bul slammal therc. " - Ann Arbor's doomed Mayor James Stephenson asquoted in a recent Michigan Daily, reflectingon next April's election, Help keep him there. Register to Vote! LOCAL ANNOUNCEMENTS: The Ann Arbor Recycling Station on S. Industrial Highway wil! no longei be open on Wednesdays. To find out their new hours, 01 to voluntccr needed help, cali 7él-3186... Looking foi ;i job1.' Ann Arbor has just received a federal grant tor a block oj public service jobs. Applications are availible al the CETA office at 212 S. Foarth Ave, office 7, or by calling l4-)() h... Zen Mastei l'lullip Kapleau will speak in And. 3 of the Modern Language Building on January 24 at 4pm. I lio iollowing day heil give a workshop al the Union Ballroom... THE FRIENDS OF THE SUN INTERNATIONAL FILM SERIES is presenting is fourth tlick on January 2l with the screening of Costa Gravas' superb film, "State ol Siege". I he film is hascd on the true story of an Agency for International Developmenl official who was kulnapped by the Tupamaro guerillas ol Uruguay. Dan Mttrione', the AID official, was once a Richmond, Indiana pólice chief, then served as a "public safety advisor" in Uruguay. After that nation's President Areco refused demands for the release of I 50 political prisoners, the Tupamaros executêd him. The musical score for State of Siege was written by Mikis Theodorakis, who also did the score for Costa Gravas' Z. Franco Solinas, of Battle of Algiers fame, wrote the screenplay. The AID official is played by Yves Montand, who played the deputy in Z. See State of Siege, MLB 3 at 7 and 9pm, Wednesday, Jan. 24. MUSIC NEWS: WNRZ-FM is changing its cali letters to WIQB, 103 FM. U's expected back on the fm with "progressive rock" by about March 1 ... Herbie Hancock has been booked Uto llill Auditorium for February 22nd, following a series of lower-key actifrom UAC... WCBN-FM has moved from H9.5 to 88.3 on the radio dial, at FCC request, to make room for EMU's radio station of the same name. If the new CBN frequency is coming through with interference, please cali them at 76 1 - 3501. Commander Cody and His Lost Planet Airmen have signed a new recording deal with Warner Brothers, which should greatly aid their efforts to Ozone America. A new lp is due out shortly... George Krayne, the Commander himself, recently' rescued a fellow band member from electrocution during a performance... Soul singer Bobby Womack is working on a film presentation of the life of the late, great, Sam Cooke... Don't miss the TRIBü ;ii the Blind Pig next week, nor the Blues Jam at the Union Ballroom on Friday. Speak to you again next on Friday, January 31st, when the next SUN hits the streets.