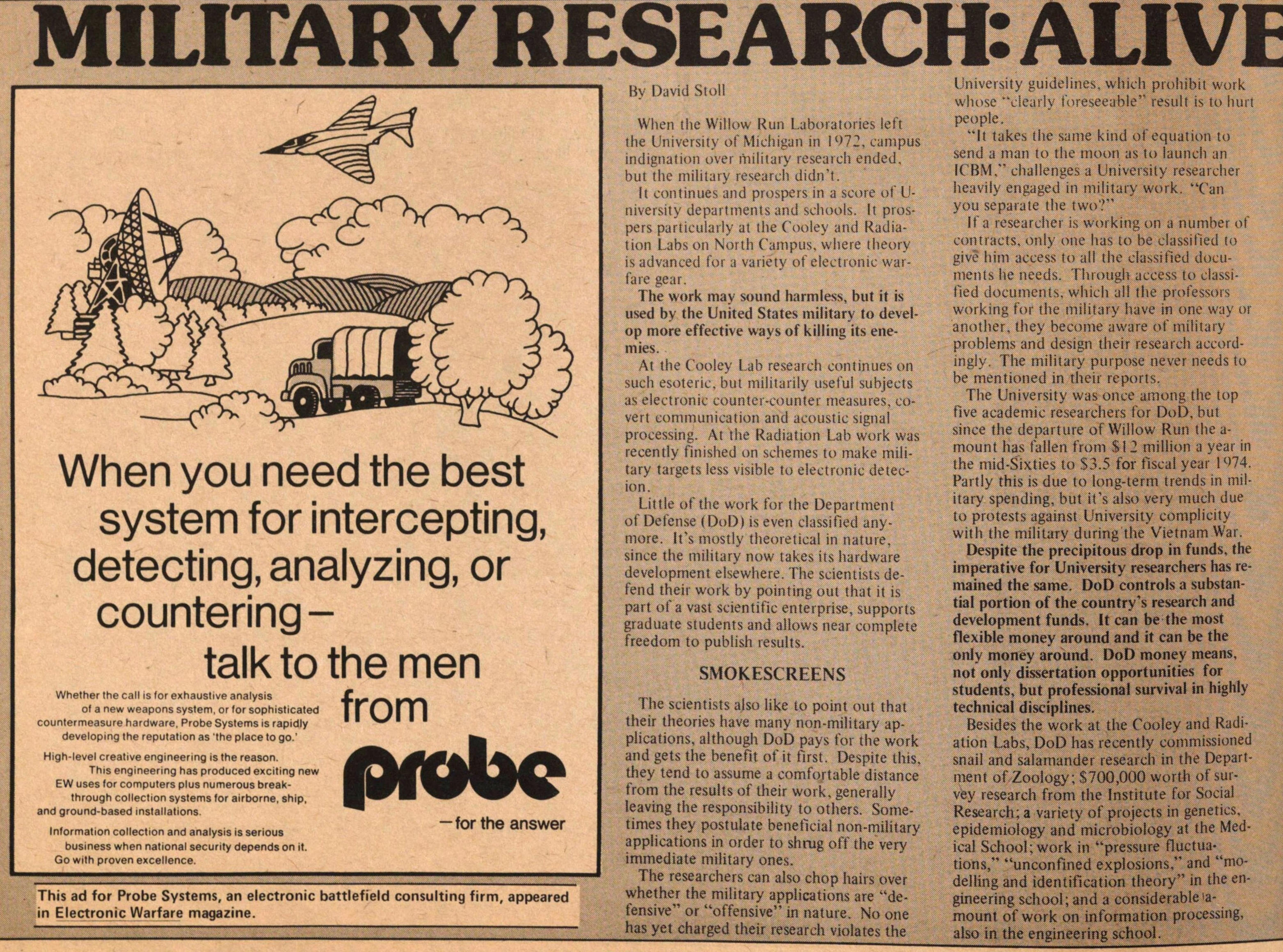 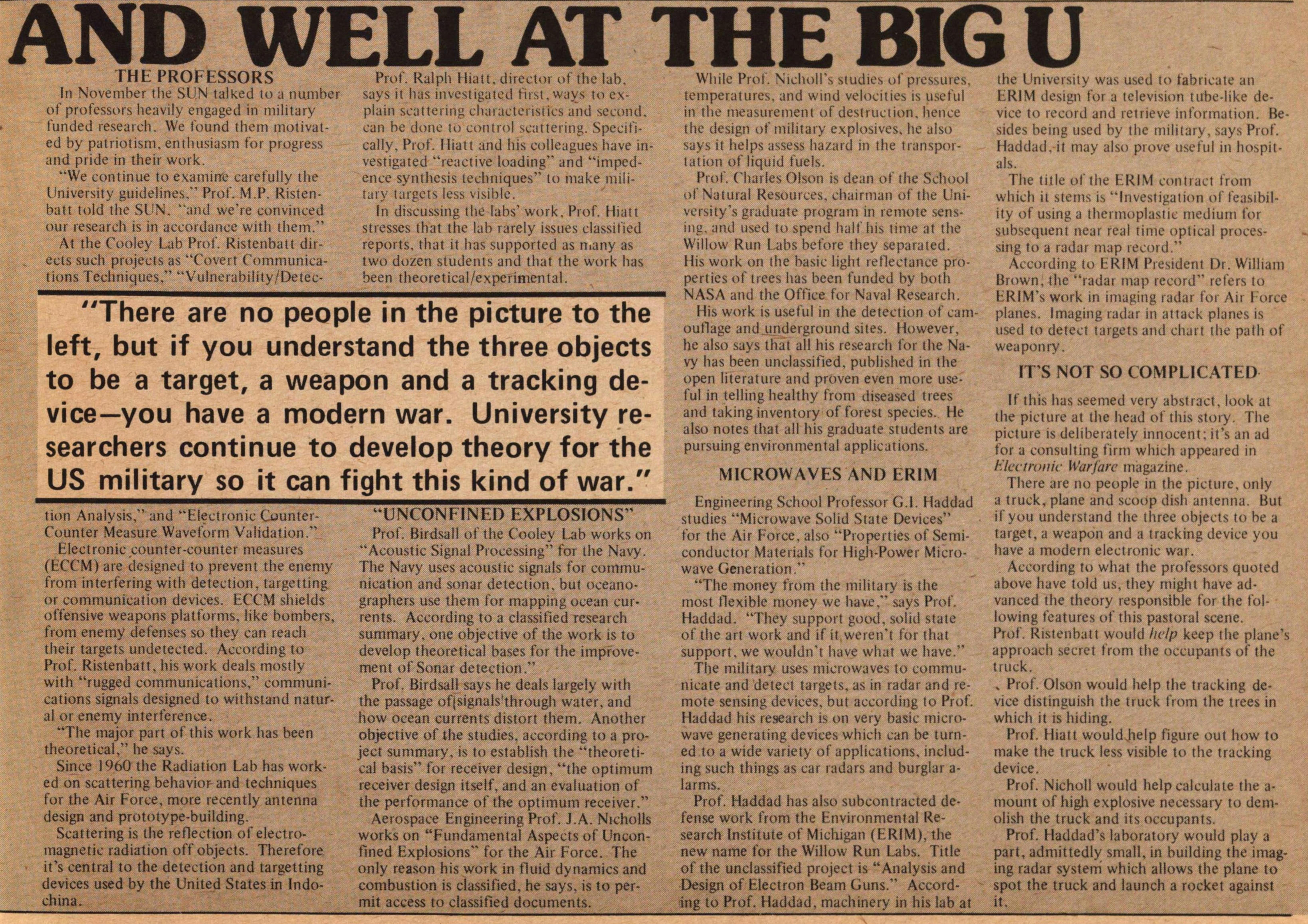 It continues and prospers in a score ot University departments and schools. It prospers particularly at the Cooley and Radiation Labs on North Campus, where theory is advanced for a variety of electronic warfare gear.

The work may sound harmless, but it is used by the United States military to develop more effective ways of killing its enemies.

At the Cooley Lab research continues on such esoteric, but militarily useful subjects as electronic counter-counter measures, covert communication and acoustic signal processing. At the Radiation Lab work was recently finished on schemes to make military targets less visible to electronic detection.

Little of the work for the Department of De ten se (DoD) is even classified anymore. If s mostly theoretical in nature, since the military now takes its hardware development elsewhere. The scientists defend their work by pointing out that it is part of a vast scientific enterprise, supports graduate students and allows near complete freedom to publish results.

The scientists also like lo point out that their theories have many non-military applications, although DoD pays for the work and gets the benefit of it first. Despite this, they tend to assume a comfortable distance from the results of their work, generally leaving the responsibility to others. Sometimes they postulate beneficial non-military applications in order to shrug off the very immediate military ones.

The researchers can also chop hairs over whether the military applications are "defensive" or "offensive" in nature. No one has yet charged their research violates the  University guidelines, which prohibit work whose "clearly for seeable" result is to hurt people.

"It takes the same kind of equation to send a man a the moon as to launch an ICBM." challenges a University researcher heavily engaged in military work. "Can you separate the two?"

The University was once among the top five academic researchers for DoD, but since the departure of Willow Run the amount has fallen from $I2 million a year in the mid-Sixties to $3.5 for fiscal year l974. Partly this is due to long-term trends in military spending, but it's also very much due to protests against University complicity with the military during the Vietnam War.

Despite the precipitous drop in funds, the imperative for University researchers has remained the same. DoD controls a substantial portion of the country 's research and development funds. It can be the most flexible money around and it can be the only money around. DoD money means, not only dissertation opportunities for students, but professional survival in highly technical disciplines.

Besides the work at the Cooley and Radiation Labs, DoD has recently commissioned snail and salamander research in the Department of Zoology; $700,000 worth of survey research from the Institute for Social Research; a variety of projects in genetics. epidemiology and microbiology at the Medical School; work in "pressure fluctuations," "unconfined explosions," and "modeling and Identification theory" in the engineering school; and a considerable 'amount of work on information processing, also in the engineering school.

Whether the cali is for exhaustive analysis of a new weapons system. or for sophisticated countermeasure hardware, Probe Systems is rapidly  developing the reputation as 'the place to go.'

Information collection and analysis is serious business when national security depends on it. Go with proven excellence.

In November the SUN talked lo a number of professors heavily engaged in military funded research. We found them motivated by patriotism, enthusiasm for progress and pride in their work.

"We continue to examine carefully the University guidelines." Prof. M.P. Ristenbatt told the SUN. "and we're convinced our research is in accordance with them."

Electronic counter-counter measures (ECCM) are designed to prevent the enemy from interfering with detection, targeting or communication devices. ECCM shields offensive weapons platforms, like bombers, from enemy defenses so they can reach their targets undetected. According lo Prof. Ristenbatt, his work deals mostly with "rugged Communications," communications signals designed to withstand natural or enemy interference

"The major part of his work has been theoretical," he says.

Since 1960 the Radiation Lab has worked on scattering behavior and techniques for the Air Force, more recently antenna design and prototype-building.

Scattering is the reflection of electromagnetic radiation off objects. Therefore it's central to the detection and targeting devices used by the United States in Indochina.

Prof. Ralph Hiatt, director of the lab, says it has investigated first, ways to explain scattering characteristics and second, what can be done to control scattering. Specifically, Prof. Hiatt and his colleagues have investigated "reactive loading" and "impedence synthesis techniques" to make military targets less visible.

In discussing the labs' work. Prof. Hiatt stresses that the lab rarely issues classified reports. that it has supported as many as two dozen students and that the work has been theoretical/experimental.

Prof. Birdsall of the Cooley Lab works on "Acoustic Signal Processing" for the Navy. The Navy uses acoustic signals for communication and sonar detection. but oceanographers use them for mapping ocean currents. According to a classified research summary, one objective of the work is to develop theoretical bases for the improvement of Sonar detection."

Prof. Birdsall says he deals largely with the passage of

Aerospace Engineering Prof. J.A. Nicholls works on "Fundamental Aspects of Unconfined Explosions" for the Air Force. The only reason his work in fluid dynamics and combustion is classified, he says, is to permit access to classified documents.

While Prof. Nicholl's studies of pressures, temperatures. and wind velocities is useful in the measurement of destruction, hence the design of military explosives. he also says it helps assess hazard in the transportation of liquid fuels.

Prof. Charles Olson is dean of the School uf Natural Resources, chairman of the University's graduate program in remote sensing, and used to spend half his time at the Willow Run Labs before they separated. His work on the basic light reflectance properties of trees has been funded by both NASA and the Office for Naval Research.

His work is useful in the detection of camouflage and underground sites. However, he also says that all his research for the Navy has been unclassified, published in the open literature and proven even more useful in telling healthy from diseased trees and taking inventory of forest species. He also notes that all his graduate students are pursuing environmental applications.

"The money from the military is the roost flexible money we have." says Prof. Haddad. "They support good, solid state of the art work and if it weren't for that support, we wouldn't have what we have."

The military uses microwaves to communicate and detect targets, as in radar and remote sensing devices, but according to Prof. Haddad his research is on very basic microwave generating devices which can be turned to a wide variety of applications, including such things as car radars and burglar alarms.

Prof. Haddad has also subcontracted defense work from the Environmental Research Institute of Michigan (ERIM), the new name for the Willow Run Labs. Title of the unclassified project is "Analysis and Design of Electron Beam Guns." According to Prof. Haddad, machinery in his lab at the University was used lo fabricate an ERIM design (bi a television tube-like device to record and retrieve information. Besides being used by the military, says Prof. Haddad.it may also prove useful in hospitals.

The title of the E RIM contract from which t sterns is "Investigation of feasibility of using a thermoplastic medium for subsequent near real time optical processing to a radar map record."

IT'S NOT SO COMPLICATED

If this has seemed very abstract, look at the picture at the head of this story. The picture is deliberately innocent; it's an ad tor a consulting firm which appeared in Electronic Warfare magazine.

There are no people in the picture, only a truck, plane and scoop dish antenna. lint if you understand the three objects to be a target, a weapon and a tracking device you have a modern electronic war.

According to what the professors quoted above have told us, they might have advanced the theory responsible for the following features of this pastoral scene. Prof. Ristenbatt would help keep the plane's approach secret from the occupants of the truck.

Prof. Olson would help the tracking device distinguish the truck from the trees in which it is hiding.

Prof. Hiatt would help figure out how to make the truck less visible to the tracking device.

Prof. Nicholl would help calculate the amount of high explosive necessary to demolish the truck and its occupants.

Prof. Haddad's laboratory would play a part, admittedly small, in building the imaging radar system which allows the plane to spot the truck and launch a rocket against it.

"There are no people in the picture to the left, but if you understand the three objects to be a target, a weapon and a tracking device- you have a modern war. University researchers continue to develop theory for the US military so it can fight this kind of war."