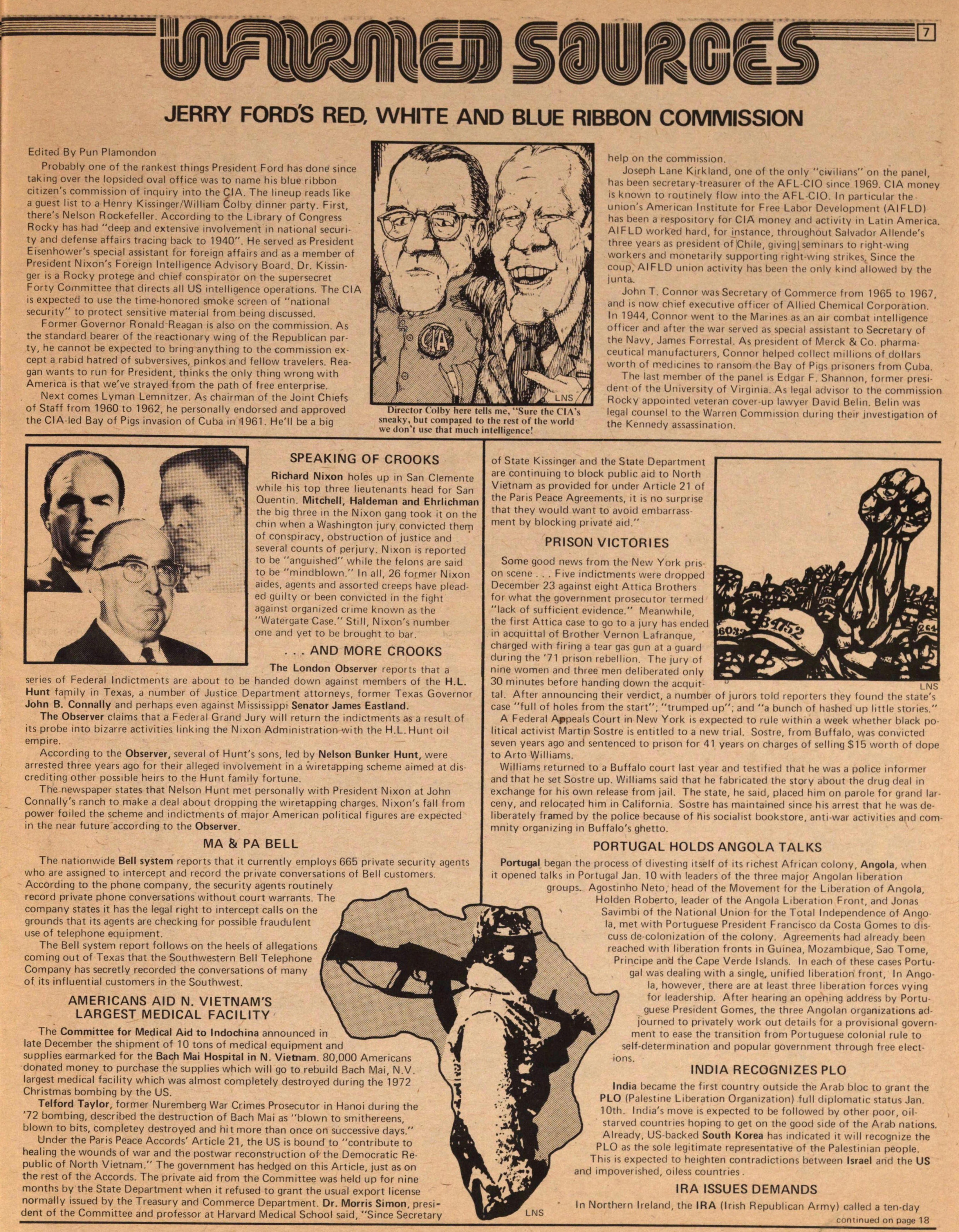 Probably one of the rankest things President Ford has done since taking over the lopsided oval office was to name his blue ribbon citizen's commission of inquiry into the CIA. The lineup reads like a guest list to a Henry Kissinger/William Colby dinner party. First, there's Nelson Rockefeller. According to the Library of Congress Rocky has had "deep and extensive involvement in national security and defense affairs tracing back to 1940". He served as President Eisenhower's special assistant for foreign affairs and as a member of President Nixon's Foreign Intelligence Advisory Board. Dr. Kissinger is a Rocky protege and chief conspirator on the super secret Forty Committee that directs all US intelligence operations. The CIA is expected to use the time-honored smoke screen of "national security" to protect sensitive material from being discussed.

Former Governor Ronald Reagan is also on the commission. As the Standard bearer of the reactionary wing of the Republican party, he cannot be expected to bring anything to the commission except a rabid hatred of subversives, pinkos and fellow travelers. Reagan wants to run for President, thinks the only thing wrong with America is that we've strayed from the path of free enterprise.

Next comes Lyman Lemnitzer. As chairman of the Joint Chiefs of Staff from 1960 to 1962, he personally endorsed and approved the CIA-Ied Bay of Pigs invasion of Cuba in 1961. He'll be a big help on the commission.

Joseph Lane Kirkland, one of the only "civilians" on the panel, has been secretary-treasurer of the AFLCIO since 1969. CIA money is known to routinely flow into the AFLCIO. In particular the union's American Institute for Free Labor Development (AIFLD) has been a repository for CIA money and activity in Latin America. AIFLD worked hard, for instance, throughout Salvador Allende's three years as president of Chile, giving seminars to rightwing workers and monetarily supporting rightwing strikes. Since the coup, AIFLD union activity has been the only kind allowed by the junta.

John T. Connor was Secretary of Commerce from 1965 to 1967, and is now chief executive officer of Allied Chemical Corporation. In 1944, Connor went to the Marines as an air combat intelligence officer and after the war served as special assistant to Secretary of the Navy, James Forrestal. As president of Merck & Co. pharmaceutical manufacturers, Connor helped collect millions of dollars worth of medicines to ransom the Bay of Pigs prisoners from Cuba.

The last member of the panel is Edgar F. Shannon, former president of the University of Virginia. As legal advisor to the commission Rocky appointed veteran cover-up lawyer David Belin. Belin was legal counsel to the Warren Commission during their jnvestigation of the Kennedy assassination.

Richard Nixon holes up in San Clemente while his top three lieutenants head for San Quentin. Mitchell, Haldeman and Ehrlichman the big three in the Nixon gang took it on the chin when a Washington jury convicted them of conspiracy, obstruction of justice and several counts of perjury. Nixon is reported to be "anguished" while the felons are said to be "mind blown." In all, 26 former Nixon aides, agents and assorted creeps have pleaded guilty or been convicted in the fight against organized crime known as the "Watergate Case." Still, Nixon's number one and yet to be brought to bar.

The London Observer reports that a series of Federal Indictments are about to be handed down against members of the H.L. Hunt family in Texas, a number of Justice Department attorneys, former Texas Governor John B. Connally and perhaps even against Mississippi Senator James Eastland.

The Observer claims that a Federal Grand Jury will return the indictments as a result of its probe into bizarre activities linking the Nixon Administration with the H.L. Hunt oil empire.

According to the Observer, several of Hunt's sons, led by Nelson Bunker Hunt, were arrested three years ago for their alleged involvement in a wiretapping scheme aimed at discrediting other possible heirs to the Hunt family fortune.

The news paper states that Nelson Hunt met personally with President Nixon at John Connally's ranch to make a deal about dropping the wiretapping charges. Nixon's fall from power foiled the scheme and indictments of major American political figures are expected in the near future according to the Observer.

The nationwide Bell system reports that t currently employs 665 private security agents who are assigned to intercept and record the private conversations of Bell customers. According to the phone company, the security agents routinely record private phone conversations without court warrants. The company states it has the legal right to intercept calls on the grounds that its agents are checking for possible fraudulent use of telephone equipment.

The Bell system report follows on the heels of allegations coming out of Texas that the Southwestern Bell Telephone Company has secretly recorded the conversations of many of its influential customers in the Southwest.

The Committee for Medical Aid to Indochina announced in late December the shipment of 10 tons of medical equipment and supplies earmarked for the Bach Mai Hospital in N. Vietnam. 80,000 Americans donated money to purchase the supplies which will go to rebuild Bach Mai, N.V.  largest medical facility which was almost completely destroyed during the 1972 Christmas bombing by the US.

Telford Taylor, former Nuremberg War Crimes Prosecutor in Hanoi during the '72 bombing, described the destruction of Bach Mai as "blown to smithereens, blown to bits, completely destroyed and hit more than once on successive days."

Under the Paris Peace Accords' Article 21, the US is bound to "contribute to healing the wounds of war and the postwar reconstruction of the Democratic Republic of North Vietnam." The government has hedged on this Article, just as on the rest of the Accords. The private aid from the Committee was held up for nine months by the State Department when it refused to grant the usual export license normally issued by the Treasury and Commerce Department. Dr. Morris Simon, president of the Committee and professor at Harvard Medical School said, "Since Secretary of State Kissinger and the State Department are continuing to block public aid to North Vietnam as provided for under Article 21 of the Paris Peace Agreements, it is no surprise that they would want to avoid embarrassment by blocking private aid."

Some good news from the New York prison scene . . . Five indictments were dropped December 23 against eight Attica Brothers for what the government prosecutor termed "lack of sufficient evidence." Meanwhile, the first Attica case to go to a jury has ended in acquittal of Brother Vernon Lafranque, charged with firing a tear gas gun at a guard during the '71 prison rebellion. The jury of nine women and three men deliberated only 30 minutes before handing down the acquittal. After announcing their verdict, a number of jurors told reporters they found the state's case "full of holes from the start"; "trumped up"; and "a bunch of hashed up little stories."

A Federal Appeals Court n New York is expected to rule within a week whether black political activist Martin Sostre is entitled to a new trial. Sostre, from Buffalo, was convicted seven years ago and sentenced to prison for 41 years on charges of selling $15 worth of dope to Arto Williams.

Williams returned to a Buffalo court last year and testified that he was a police informer and that he set Sostre up. Williams said that he fabricated the story about the drug deal in exchange for his own release from jail. The state, he said, placed him on parole for grand larceny, and relocated him in California. Sostre has maintained since his arrest that he was deliberately framed by the police because of his socialist bookstore, anti-war activities and community organizing in Buffalo's ghetto.

Portugal began the process of divesting itself of its richest African colony, Angola, when it opened talks in Portugal Jan.10 with leaders of the three major Angolan liberation groups. Agostinho Neto, head of the Movement for the Liberation of Angola, Holden Roberto, leader of the Angola Liberation Front, and Jonas Savimbi of the National Union for the Total Independence of Angola, met with Portuguese President Francisco da Costa Gomes to discuss decolonization of the colony. Agreements had already been reached with liberation fronts in Guinea, Mozambique, Sao Tome, Principe and the Cape Verde Islands. In each of these cases Portugal was dealing with a single, unified liberation front, In Angola, however, there are at least three liberation forces vying for leadership. After hearing an opening address by Portuguese President Gomes, the three Angolan organizations adjourned to privately work out details for a provisional government to ease the transition from Portuguese colonial rule to self-determination and popular government through free elections.

India became the first country outside the Arab bloc to grant the PLO (Palestine Liberation Organization) full diplomatic status Jan.l0th. India's move is expected to be followed by other poor, oil starved

countries hoping to get on the good side of the Arab nations. Already, US-backed South Korea has indicated it will recognize the PLO as the sole legitimate representative of the Palestinian people. This s expected to heighten contradictions between Israel and the US and impoverished, oilless countries .

In Northern Ireland, the IRA (Irish Republican Army) called a ten-day   truce over Christmas and New Year's and at the same time put forward their terms for a permanent cease fire. The Provos demanded the release of all political internees and the abolishment of their camps. Finally, they want all British soldiers to return and be restricted to  their barracks as a prelude to the British Army's withdrawal from Northern Ireland. In a related move, petitions with more than 100,000 signatures demanding an immediate end to internment without trial in N. Ireland were presented in Dublin, London and New York on December 10-Human Rights Day, marking the 26th anniversary of the adoption of the Universal Declaration of Human Rights . . .