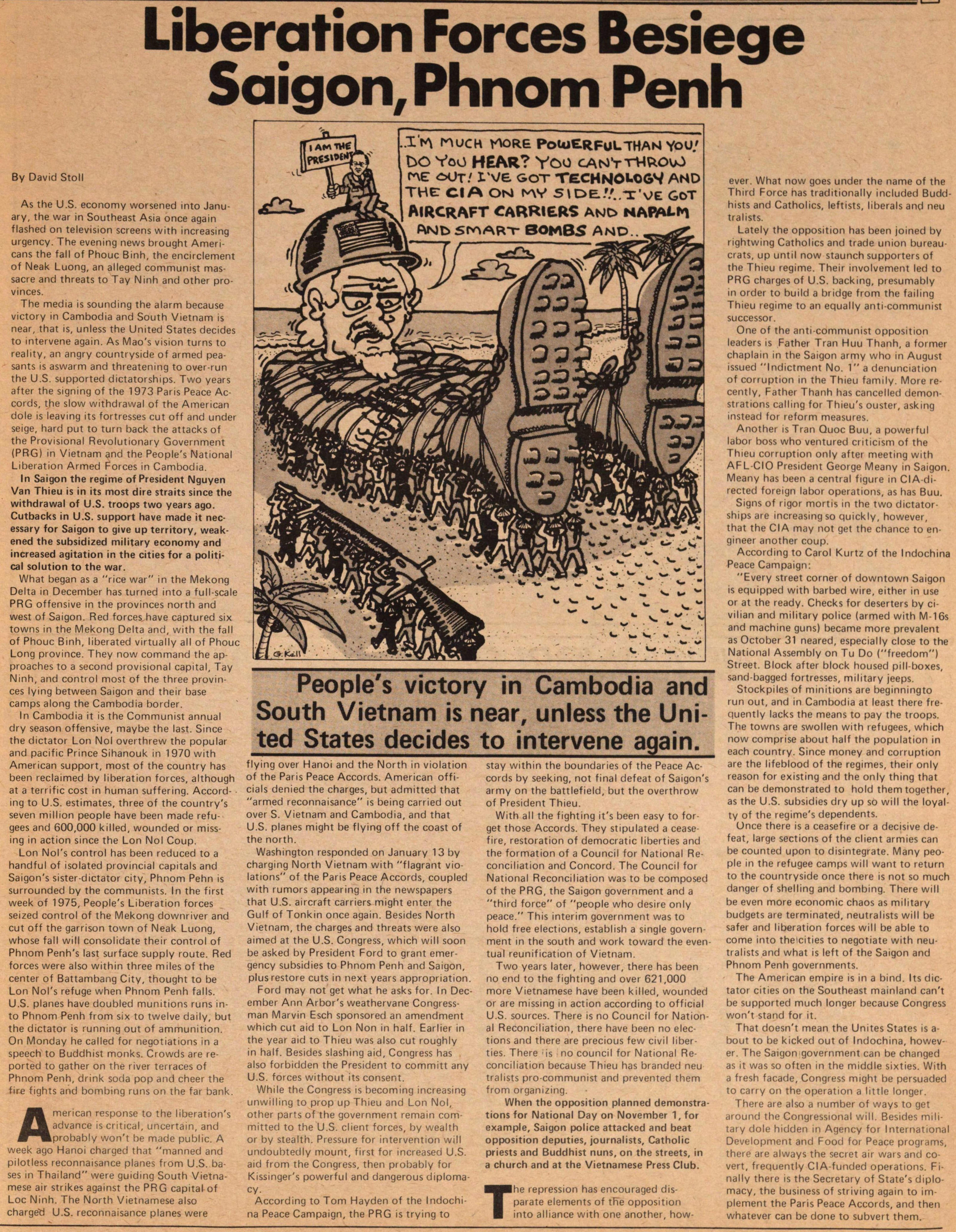 As the U.S. economy worsened into January, the war n Southeast Asia once again flashed on television screens with increasing urgency. The evening news brought Americans the fall of Phouc Binh, the encirclement of Neak Luong, an alleged communist massacre and threats to Tay Ninh and other provinces.

The media is sounding the alarm because victory in Cambodia and South Vietnam is near, that is, unless the United States decides to intervene again. As Mao's vision turns to reality, an angry countryside of armed peasants is aswarm and threatening to over-run the U.S. supported dictatorships. Two years after the signing of the 1973 Paris Peace Accords, the slow withdrawal of the American dole is leaving its fortresses cut off and under seige, hard put to turn back the attacks of the Provisional Revolutionary Government (PRG) in Vietnam and the People's National Liberation Armed Forces in Cambodia.

In Saigon the regime of President Nguyen Van Thieu is in its most dire straits since the withdrawal of U.S. troops two years ago. Cutbacks in U.S. support have made it necessary for Saigon to give up territory, weakened the subsidized military economy and increased agitation in the cities for a political solution to the war.

What began as a "rice war" in the (Mekong Delta in December has turned into a full-scale PRG offensive in the provinces north and west of Saigon. Red forces have captured six towns in the Mekong Delta and, with the fall of Phouc Binh, liberated virtually all of Phouc Long province. They now command the approaches to a second provisional capital, Tay Ninh, and control most of the three provinces lying between Saigon and their base camps along the Cambodia border.

In Cambodia it is the Communist annual dry season offensive, maybe the last. Since the dictator Lon Nol overthrew the popular and pacific Prince Sihanouk in 1970 with American support, most of the country has been reclaimed by liberation forces, although at a terrific cost in human suffering. According to U.S. estimates, three of the country's seven million people have been made refugees and 600,000 killed, wounded or missing in action since the Lon Nol Coup.

Lon Nol's control has been reduced to a handful of isolated provincial capitals and Saigon's sister dictator city, Phnom Pehn is surrounded by the communists. In the first week of 1975, People's Liberation forces seized control of the Mekong downriver and cut off the garrison town of Neak Luong, whose fall will consolidate their control of Phnom Penh's last surface supply route. Red forces were also within three miles of the center of Battambang City, thought to be Lon Nol's refuge when Phnom Penh falls. U.S. planes have doubled munitions runs into Phnom Penh from six to twelve daily, but the dictator is running out of ammunition. On Monday he called for negotiations in a speech to Buddhist monks. Crowds are reported to gather on the river terraces of Phnom Penh, drink soda pop and cheer the fire fights and bombing runs on the far bank.

American response to the liberation's advance is critical, uncertain, and probably won't be made public. A week ago Hanoi charged that "manned and pilotless reconnaissance planes from U.S. bases in Thailand" were guiding South Vietnamese air strikes against the PRG capital of Loc Ninh. The North Vietnamese also charged U.S. reconnaissance planes were flying over Hanoi and the North n violation of the Paris Peace Accords. American officials denied the charges, but admitted that "armed reconnaissance" is being carried out over S. Vietnam and Cambodia, and that U.S. planes might be flying off the coast of the north.

Washington responded on January 13 by charging North Vietnam with "flagrant violations" of the Paris Peace Accords, coupled with rumors appearing in the newspapers that U.S. aircraft carriers might enter the Gulf of Tonkin once again. Besides North Vietnam, the charges and threats were also aimed at the U.S. Congress, which will soon be asked by President Ford to grant emergency subsidies to Phnom Penh and Saigon, plus restore cuts in next years appropriation.

Ford may not get what he asks for. In December Ann Arbor's weathervane Congressman Marvin Esch sponsored an amendment which cut aid to Lon Non in half. Earlier in the year aid to Thieu was also cut roughly in half. Besides slashing aid, Congress has also forbidden the President to commit any U.S. forces without its consent.

While the Congress is becoming increasing unwilling to prop up Thieu and Lon Nol, other parts of the government remain committed to the U.S. client forces, by wealth or by stealth. Pressure for intervention will undoubtedly mount, first for increased U.S. aid from the Congress, then probably for Kissinger's powerful and dangerous diplomacy.

According to Torn Hayden of the Indochina Peace Campaign, the PRG is trying to stay within the boundaries of the Peace Accords by seeking, not final defeat of Saigon's army on the battlefield, but the overthrow of President Thieu.

With all the fighting it's been easy to forget those Accords. They stipulated a ceasefire, restoration of democratic liberties and the formation of a Council for National Reconciliation and Concord. The Council for National Reconciliation was to be composed of the PRG, the Saigon government and a "third force" of "people who desire only peace." This interim government was to hold free elections, establish a single government in the south and work toward the eventual reunification of Vietnam.

Two years later, however, there has been no end to the fighting and over 621,000 more Vietnamese have been killed, wounded or are missing in action according to official U.S. sources. There is no Council for National Reconciliation, there have been no elections and there are precious few civil liberties. There is no council for National Reconciliation because Thieu has branded neutralists pro-communist and prevented them from organizing.

When the opposition planned demonstrations for National Day on November 1, for example, Saigon police attacked and beat opposition deputies, journalists, Catholic priests and Buddhist nuns, on the streets, in a church and at the Vietnamese Press Club.

The repression has encouraged disparate elements of the opposition into alliance with one another, how ever. What now goes under the name of the Third Force has traditionally included Buddhists and Catholics, leftists, liberals and neutralists.

Lately the opposition has been joined by rightwing Catholics and trade union bureaucrats, up until now staunch supporters of the Thieu regime. Their involvement led to PRG charges of U.S. backing, presumably in order to build a bridge from the failing Thieu regime to an equally anti-communist successor.

One of the anti-communist opposition leaders is Father Tran Huu Thanh, a former chaplain in the Saigon army who in August issued "Indictment No.1" a denunciation of corruption in the Thieu family. More recently, Father Thanh has cancelled demonstrations calling for Thieu's ouster, asking instead for reform measures.

Another is Tran Quoc Buu, a powerful labor boss who ventured criticism of the Thieu corruption only after meeting with AFL-CIO President George Meany in Saigon. Meany has been a central figure in ClA-directed foreign labor operations, as has Buu.

Signs of rigor mortis in the two dictatorships are increasing so quickly, however, that the CIA may not get the chance to engineer another coup.

According to Carol Kurtz of the Indochina Peace Campaign:

"Every street corner of downtown Saigon is equipped with barbed wire, either in use or at the ready. Checks for deserters by civilian and military police (armed with M-16s and machine guns) became more prevalent as October 31 neared, especially close to the National Assembly on Tu Do ("freedom") Street. Block after block housed pillboxes, sandbagged fortresses, military jeeps.

Stockpiles of munitions are beginning to run out, and in Cambodia at least there frequently lacks the means to pay the troops. The towns are swollen with refugees, which now comprise about half the population in each country. Since money and corruption are the lifeblood of the regimes, their only reason for existing and the only thing that can be demonstrated to hold them together, as the U.S. subsidies dry up so will the loyalty of the regime's dependents.

Once there is a ceasefire or a decisive defeat, large sections of the client armies can be counted upon to disintegrate. Many people in the refugee camps will want to return to the countryside once there is not so much danger of shelling and bombing. There will be even more economic chaos as military budgets are terminated, neutralists will be safer and liberation forces will be able to come into the cities to negotiate with neutralists and what is left of the Saigon and Phnom Penh governments.

The American empire is in a bind. Its dictator cities on the Southeast mainland can't be supported much longer because Congress won't stand for it.

That doesn't mean the Unites States is about to be kicked out of Indochina, however. The Saigon government can be changed as it was so often in the middle sixties. With a fresh facade, Congress might be persuaded to carry on the operation a little longer.

There are also a number of ways to get around the Congressional will. Besides military dole hidden in Agency for International Development and Food for Peace programs, there are always the secret air wars and covert, frequently ClA-funded operations. Finally there is the Secretary of State's diplomacy, the business of striving again to implement the Paris Peace Accords, and then whatever can be done to subvert them.

People's victory in Cambodia and South Vietnam is near, unless the United States decides to intervene again.