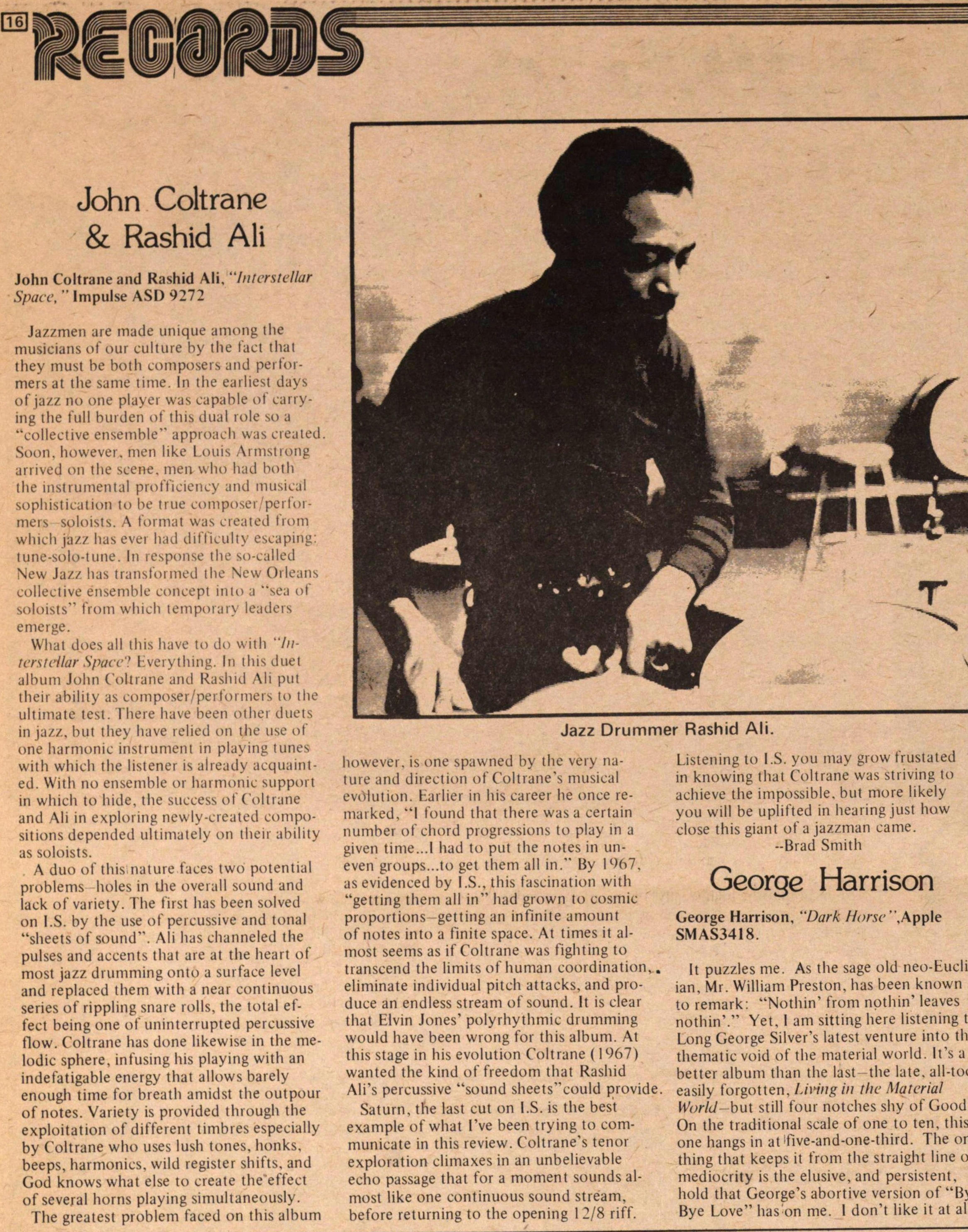 John Coltrane and Rashid Ali. "Inicrstellar Spare, "Impulse ASD 9272 Jazzmen are made unique among i he musicians of Our culture by the fací tliat they must be both composers and performers at the same time. In the earliest days of ja no uno playei was capable ol carrying the full burden of this dual role so a "collecüve ensemble" approach was created. Soon, however. men like Louis Armstrong arrived on the scène, mea whö had both the instrumental profficieney and musical sophistication to be míe composeí 'performera soloists. A formal was created from which jazz liasevei had difficuity escaping; tune-solo-tune. In response the so-called New Ja lias transformed the New Orleans collective ensemble concept into a "sea ol soloists" trom which temporary leaders emerge. What does all ihis have to do with "■ tersteikr Spacel Everything. In this duet album John Coltrane and Rashid Ali pul their abiliiy as composerperformers to the ultímate test. I here have been other duets in jazz, bul ihey have relied on the use ol one harmonie instrument in playing tunes with which the listener is already acquainled. With no ensemble or harmonie support in which to hide, the success ot Coltrane and Ali in exploring newly-created eompositions depended ultimately on their ability as soloists. A duo ot" this nature faces two potential problems holes in the overall sound and lack of variety. The fírst has been solved on I.S. by the use of percussive and tonal "sheets of sound". Ali has channeled the pulses and accents that are at the heart of most jazz drumming onto a surface level and replaced them with a near continuous series of rippling snare rolls, the total effect being one of uninterrupted percussive flow. Coltrane has done likewise in the melodie sphere, infusing his playing with an indefatigable energy that allows barely enougli time Por breath amidst the outpour of notes. Variety is provided through the exploitation of different timbres especially by Coltrane who uses lush tones, honks, beeps, harmonies, wild register shifts, and God knows what else to créate the'effect of several horra playing simultaneously. The greatest problem faced on this album liowever. is one spawned by the very nature and direction ofColtrane's musical evötution. Earliei in liis career lie once remarked, "1 tbund that tliere was a certain number of chord progressions to play in a given time...l liad tu put the notes in uneven groups...to get tliem all in." By ll67. as L'videnced by I.S.. this tascination with "getting them all in" had grown to cosmic proportions getting an infinite amount of notes into a finite space. At times it almost seems as if Coltrane was figliting to transcend the limits of human coordination,. elimínate individual pitch attacks, and produce an endless stream of sound. It is clear that Elvin Jones' polyrhythmic drumming would have been wrong for this album. At this stage in bis evolution Coltrane ( 1967) wanted the kind of freedom that Rashid Ali's percussive "sound sheets"could provide. Saturn, the last cut on I.S. is the best example of what l've been trying to communicate in this review. Coltrane's tenor exploration climaxes in an unbelievable echo passage that for a moment sounds almost like one continuous sound stream. before returning to the opening 1 28 riff. L.istening to l.S. you may grow frustated in knowing that Coltrane was Striving lo achieve the impossible. but more likely you will be uplifted in hearing just how close this siant ut' a jazzman carne.