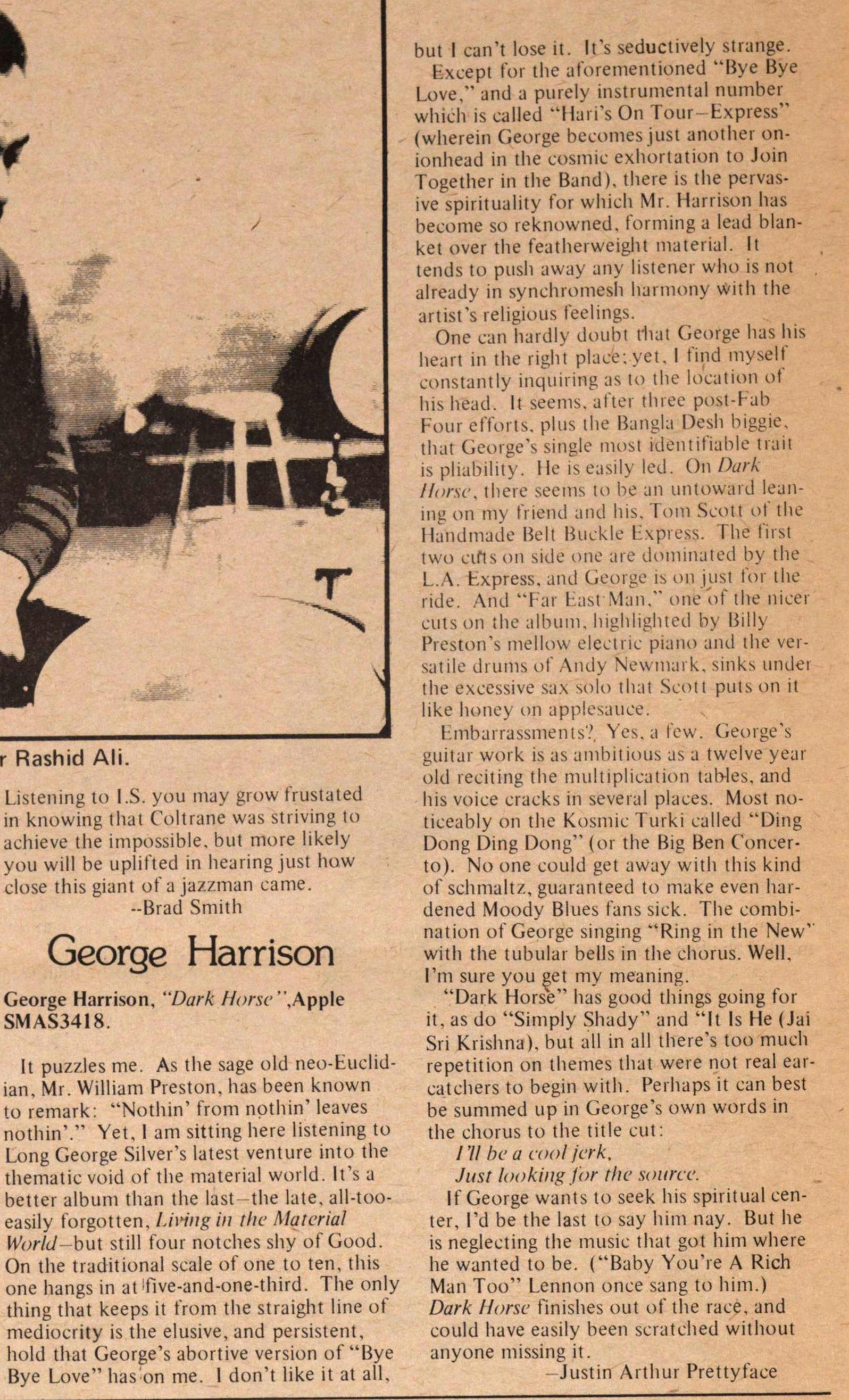 George Harrison, "Dark Morse ".Apple SMAS3418. It puzzles me. As the sage old neo-Luclidian. Mr. William Preston, has been known to remark: "Nothin' from npthin' leaves nothin'." Yet, 1 am sitting here listening to Long George Silver's latest venture into the thematic voitl of the material world. It's a bettcr album than the last the late. all-tooeasily forgotten. Living in the Material World -but still tour notches shy of Good. On the traditional scale of one to ten, this one hangs in atfive-and-one-third. The only thing that keeps it trom the straight line of mediocrity is the elusive, and persistent, hold that George's abortive version of "Bye Bye Love" has on me. 1 don't like it at all. but I can't lose it. It's seduciively strange. l-.xeept for the aforementioned "Bye Bye Love," and a purely instrumental nuniber whieh is called "Hari'sOn Express" (wherein George beeomesjust another onionhead in the cosmie exhortation to Join Together in the Band), there is the pervasive spirituality tor wliicli Mr. Harrison has become so reknowned, forminga lead blanket over the featherweighl material. It tends to push away any listenei who is not . already in synchromesh harmony wiih the artist's religious feelings. One can hardly doubt rhat George has 11 is heart in the right place;yet, I lïnd mysell' constantly inquirtng as to the location o his head. It seenis. alter three post-Fab Four etïorts. plus the Bangla Desh biggie, that George's single mosl rdentifïable tra) is pliabilit) . He iseasily led. On Dark Horse, there seenis to be an untoward leaning on my friend and his. Toni Scoti of the Handmade Belt Buckle Express. The first two ciftson skle one are dominated by the I . V Express, and Geprge is 011 just for the ride. And "Fat Easl Man," onelif the nicer cutson the album, highlighied by Bill) Preston 's mellow electrk piano and the versatile drums of Andy Ñewmark, sinks undei the excessive sax solo that Scott puts on it like honey on applesauce. Embarrassments?. Nes. a lew. George's guitar work is as ambitious as a twelve year old reciting the multiplication laWes, and his voice cracks in several places. Most noticeably on the Kösrnic Turki called "Ding Dong Ding Dong" (or the Big Ben Concerto). No one could get away with t his kind of schmaltz, guaranteed to make even hardened Moody Blues fans sick. The combination of George singing "'Ring in the New'' with the tubular bells in the chorus. Well. l'm sure you eet my meaning. "Dark Horse" has good things going for it. as do "Simply Shady" and "It Is He (Jai Sri Krislina). but all in all there's too much repetition on themes that were not real earcatchers to begin with. Perhaps it can best be summed up in George's own words in the chorus to the title cul: ' bc a cnol crk. Just looking for the sourec. If George wants to seek his spiritual center, l'd be the last to say him nay. But he is neglecting the music that got him where he wanted to be. ("Baby You're A Rich Man Too" Lennon once sang to him.) Dark Horse finishes out oí the race, and could have easily been scratched without anyone missing it.