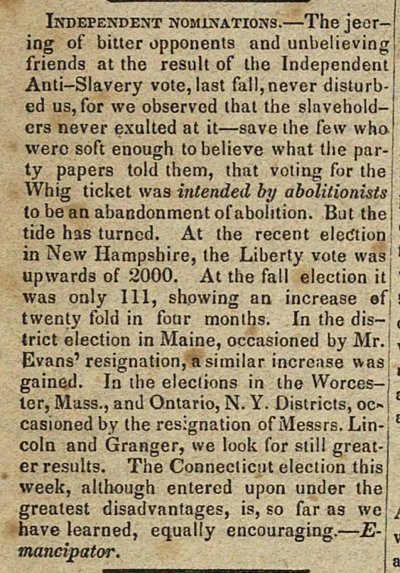 INDEPENDENT NOMINATIONS.-The jeering of bitter opponents and unbelieving friends at the result of the Independent Anti-Slavery vote, last fall, never disturbed us, for we observed that the slaveholders never exulted at it - save the few who were soft enough to believe what the party papers told them, that voting for the Whig ticket was intended by abolitionists to be an abandonment of abolition. But the tide has turned. At the recent election in New Hampshire, the Liberty vote was upwards of 2000. At the fall election it was only 111, showing an increase of twenty fold in four months. In the district election in Maine, occasioned by Mr. Evans' resignation, a similar increase was gained. In the elections in the Worcester, Mass., and Ontario, N. Y. Districts, occasioned by the resignation of Messrs. Lincoln and Granger, we look for still greater results. The Connecticut election this week, although entered upon under the greatest disadvantages, is, so far as we have learned, equally encouraging. - Emancipator