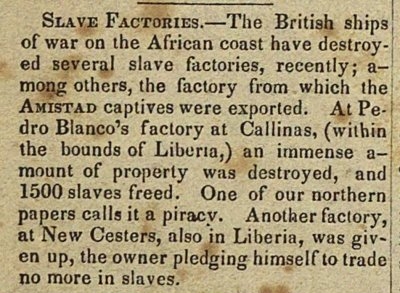 SLAVE FACTORIES.- The British ships of war on the African coast have destroyed several slave factories, recently; among others, the factory from which the Amistad captives were exported. At Pedro Blanco's factory at Callinas, (within the bounds of Liberia,) an immense amount of properly was destroyed, and 1500 slaves freed. One of our northern papers calls it a piracy. Another factory, at New Cesters, also in Liberia, was given up, the owner pledging himself to trade no more in slaves.