Weed Contest Finale The Grass Gets Greener For One Ann Arborite 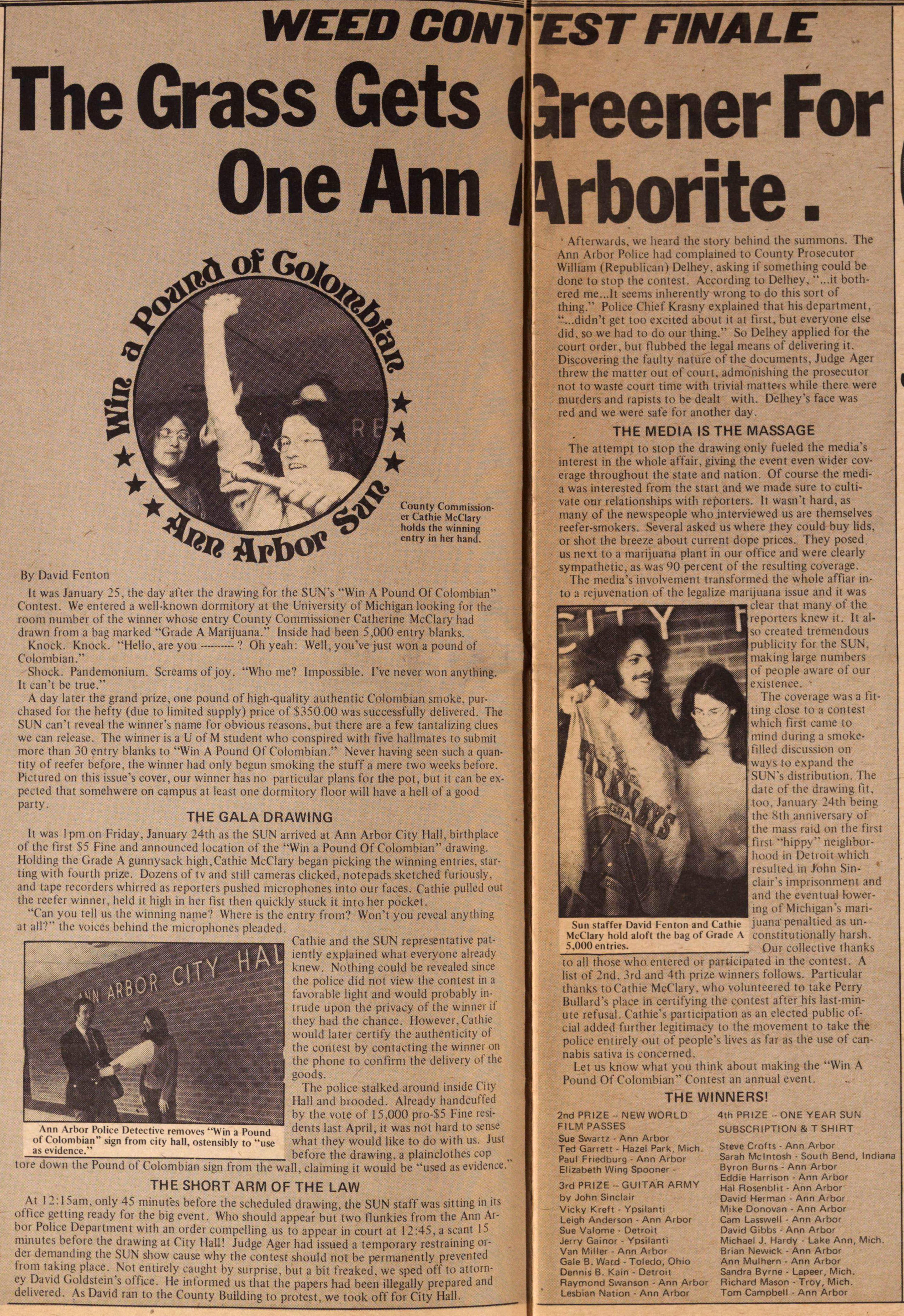 It was January 25. the day after the drawing for the SUN's "Win A Pound Of Colombian" Contest. We entered a well-known dormitory at the University of Michigan looking for the room number of the winner whose entry County Commissioner Catherine McClary had drawn from a bag marked "Grade A Marijuana." Inside had been 5,000 entry blanks.

Shock. Pandemonium. Screams of joy. "Who me? Impossible. I've never won anything. lt can't be true."

A day later the grand prize, one pound of high-quality authentic Colombian smoke, purchased for the hefty (due to limited supply) price of $350.00 was successfully delivered. The SUN can't reveal the winner's name for obvious reasons, but there are a few tantalizing clues we can release. The winner is a U of M student who conspired with five hallmates to subrnit more than 30 entry blanks to "Win A Pound Of Colombian." Never having seen such a quantity of reefer before, the winner had only begun smoking the stuff a mere two weeks before. Pictured on this issue's cover, our winner has no particular plans for the pot, but it can be expected that somewhere on campus at least one dormitory floor will have a hell of a good party.

It was 1pm on Friday, January 24th as the SUN arrived at Ann Arbor City Hall. birthplace of the first $5 Fine and announced location of the "Win a Pound Of Colombian" drawing. Holding the Grade A gunnysack high, Cathie McClary began picking the winning entries, starting with fourth prize. Dozens of TV and still cameras clicked, notepads sketched furiously, and tape recorders whirred as reporters pushed microphones into our faces. Cathie pulled out the reefer winner, held it high in her fist then quickly stuck it into her pocket.

"Can you tell us the winning name? Where is the entry from? Won't you reveal anything at all?'" the voices bchind the microphones pleaded.

Cathie and the SUN representative patiently explained what everyone already knew. Nothing could be revealed since the pólice did nol view the contest in a favorable light and would probably intrude upon the privacy of the winnei I they liad the chance. However.Cathie would later certify the authenticity of the contest by contacting the winner on the phone to confimi the delivery of the goods.

The police stalked around inside City Hall and brooded. Already handcuffed by the vote of 15,000 pro-$5 Fine readents last April, it was not hard to sense what they would like to do with us. Just before the drawing, a plainclothes cop tore down the Pound of Colombian sign from the wall, claiming it would be "used as evidence."

Ann Arbor Police Detective removes "Win a pound of Columbian" sign from city hall, ostensibly to "use as evidence"

THE SHORT ARM OF THE LAW

At 12:15 am, only 45 minutes before the scheduled drawing, the SUN staff was sitting in its office getling ready for the big event. Who should appear but two flunkies from the Ann Arbor Police Department with an order compelling us to appear in court al 12:45, a scant 15 minutes before the drawing at City Hall! Judge Ager had issued a temporary restraining order demanding the SUN show cause why the contest should not be permanently prevented from taking place. Not entirely caught by surprise, but a bit freaked. we sped off to attorney David Goldstein's office. He informed us that the papers had been illegally prepared and delivered. As David ran to the County Building to protest, we took off for City Hall.

Afterwards, we heard the story behind the summons. The Ann Arbor Police had complained to County Prosecutor William (Republican) Delhey, asking if something could be done to stop the contest. According to Delhey, "...it bothered me...lt seems inherently wrong to do this sort of thing." Police Chief Krasny explained that his department,"...didn't get too excited about it at first, but everyone else did, so we had to do our thing." So Delhey applied tbr the court order, but flubbed the legal means of delivering it. Discovering the faulty nature of the documents, Judge Ager threw the matter out of court, admonishing the prosecutor not to waste court time with trivial matters while there were murders and rapists to be dealt with. Delhey's face was red and we were safe for another day.

THE MEDIA IS THE MASSAGE

The attempt to stop the drawing only fueled the media's interest in the whole affair, giving the event even wider coverage throughout the state and nation. Of course the media was interested from the start and we made sure to cultivate our relationships with reporters. It wasn't hard, as many of the newspeople who interviewed us are themselves reefer-smokers. Several asked us where they could buy lids or shot the breeze about current dope prices. They posed us next to a marijuana plant in our office and were clearly sympathetic, as was 90 percent of the resulting coverage.

The media's involvement transformed the whole affair into a rejuvenation of the legalize marijuana issue and it was clear that many of the reporters knew it. It also created tremendous publicity for the SUN, making large numbers of people aware of our existence.

The coverage was a fitting close to a contest which first carne to mind during a smoke-filled discussion on ways to expand the SUN's distribution. The date of the drawing fit too, January 24th being the 8th anniversary of the mass raid on the first "hippy" neighborhood in Detroit which resulted in John Sinclair's imprisonment and and the eventual lowering of Michigan's marijuana penalties as unconstitutionally harsh.

Our collective thanks to all those who entered or participated in the contest. A list of 2nd, 3rd and 4th prize winners follows. Particular thanks to Cathie McClary, who volunteered to take Perry Bullard's place in certifying the contest after his last-minute refusal. Cathie's participation as an elected public official added further legitimacy to the movement to take the police entirely out of people's lives as far as the use of cannabis sativa is concerned.

Let us know what you think about making the "Win A Pound Of Colombian" Contest an annual event.