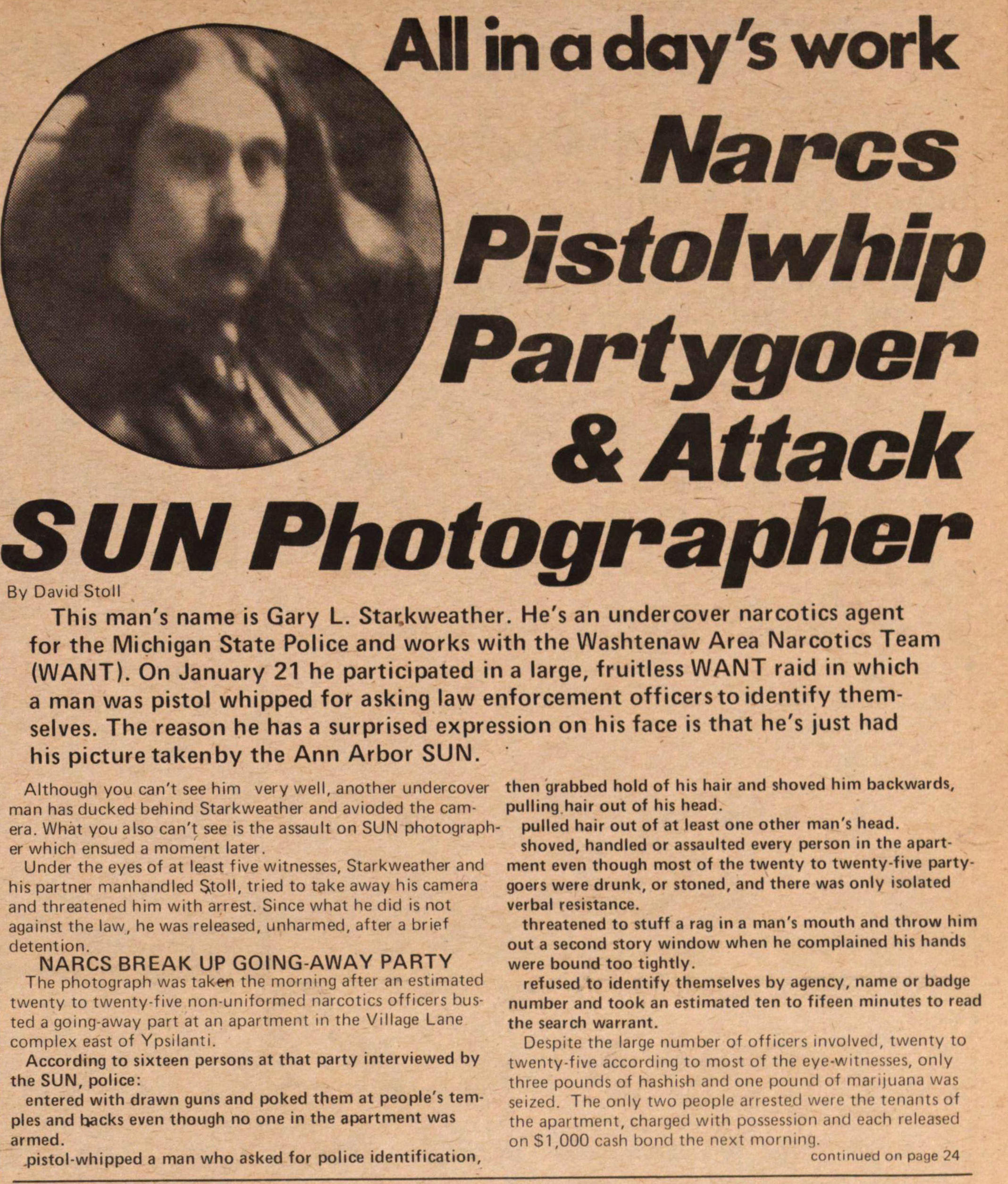 This man's name is Gary L. Statkweather. He's an undercover narcotics agent for the Michigan State Pólice and works with the Washtenaw Area Narcotics Team (WANT). On January 21 he participated in a large, fruitless WANT raid in which a man was pistol whipped for asking law enforcement officerstoidentify themselves. The reason he has a surprised expression on his face is that he's just had his picture takenby the Ann Arbor SUN. Although you can't see him very well, another undercover man has ducked behind Starkweather and avioded the camera. What you also can't see s the assault on SUN photographer which ensued a moment later. Under the eyes of at least f ive witnesses, Starkweather and his partner manhandled Stoll, tried to take away his camera and threatened him with arrest. Since what he did is not against the law, he was released, unharmed, after a brief detention. NARCS BREAK UP GOING-AWAY PARTY The photograph was taken the morning after an estimated twenty to twenty-five nonuniformed narcotics officers busted a going-away part at an apartment n the Village Lane complex east of Ypsilanti. According to sixteen persons at that party interviewed by the SUN, pólice: entered with drawn guns and poked them at people's temples and backs even though no one in the apartment was armed. .pistol-whipped a man who asked for pólice identif ication. then grabbed hold of his hair and shoved him backwards, puiling hair out of his head. pulled hair out of at least one other man's head. shoved, handled or assaulted every person in the apartment even though most of the twenty to twenty-five partygoers were drunk, or stoned, and there was only isolated verbal resistance. threatened to stuff a rag in a man's mouth and throw him out a second story window when he complained his hands were bound too tightly. refused to identify themselves by agency, name or badge number and took an estimated ten to fifeen minutes to read the search warrant. Despite the large number of off cers involved, twenty to twenty-five according to most of the eye-witnesses, only three pounds of hashish and one pound of marijuana was seized. The only two people arrested were the tenants of the apartment, charged with possession and each released on 51,000 cash bond the next mornincj. continued on page 24