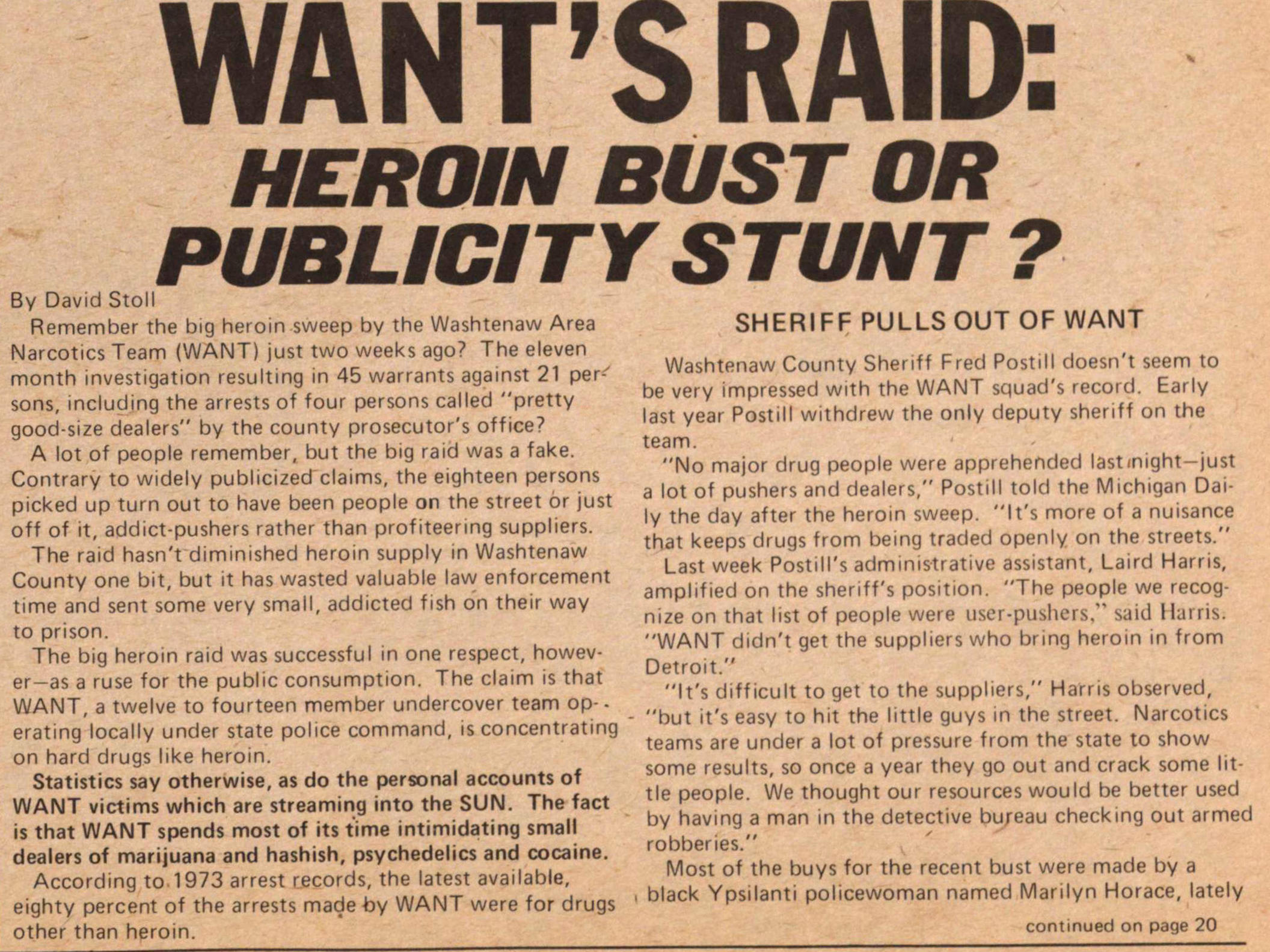 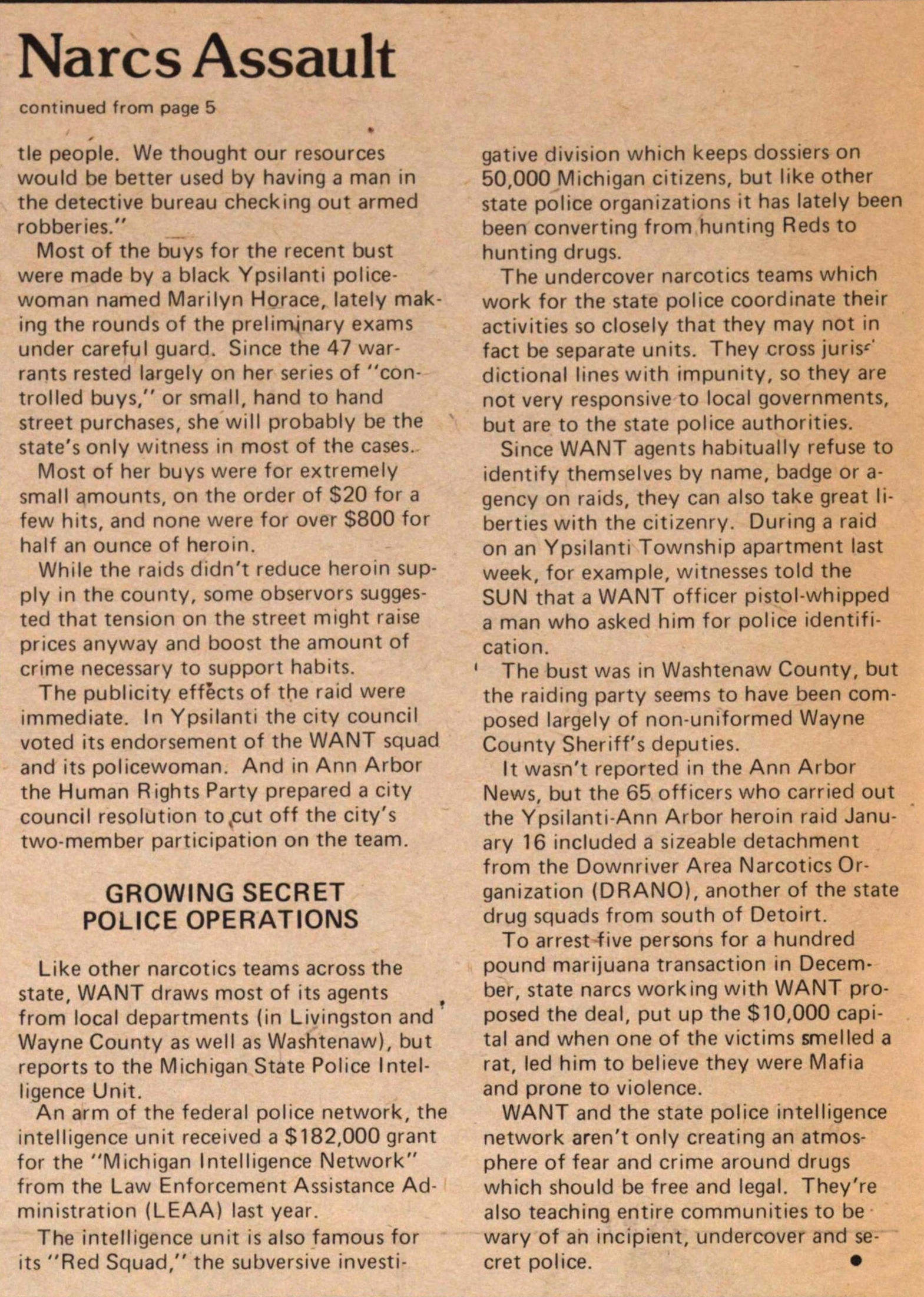 Remember the big heroin sweep by the Washtenaw Area Narcotics Team (WANT) just two weeks ago? The eleven month investigation resulting in 45 warrants against 21 persons, including the arrests of four persons called "pretty good-size dealers" by the county prosecutor's office?

A lot of people remember, but the big raid was a fake. Contrary to widely publicized claims, the eighteen persons picked up turn out to have been people on the street or just off of it, addict-pushers rather than profiteering suppliers.

The raid hasn't diminished heroin supply in Washtenaw County one bit, but it has wasted valuable law enforcement time and sent some very small, addicted fish on their way to prison.

The big heroin raid was successful in one respect, however — as a ruse for the public consumption. The claim is that WANT, a twelve to fourteen member undercover team operating locally under state police command, is concentrating on hard drugs like heroin.

Statistics say otherwise, as do the personal accounts of WANT victims which are streaming into the SUN. The fact is that WANT spends most of its time intimidating small dealers of marijuana and hashish, psychedelics and cocaine.

According to 1973 arrest records, the latest available, eighty percent of the arrests made by WANT were for drugs other than heroin.

SHERIFF PULLS OUT OF WANT

"No major drug people were apprehended last night — just a lot of pushers and dealers," Postill told the Michigan Daily the day after the heroin sweep. "It's more of a nuisance that keeps drugs from being traded openly on the streets."

Last week Postill's administrative assistant, Laird Harris, amplified on the sheriff's position. "The people we recognize on that list of people were user-pushers." said Ihmis. "WANT didn't get the suppliers who bring heroin in from Detroit."

"It's difficult to get to the suppliers," Harris observed, "but it's easy to hit the little guys in the street. Narcotics teams are under a lot of pressure from the state to show some results, so once a year they go out and crack some little people. We thought our resources would be better used by having a man in the detective bureau checking out armed robberies."

Most of the buys for the recent bust were made by a black Ypsilanti policewoman named Marilyn Horace, lately continued on page 20 Nares Assault continued from page 5 tle people. We thought our resources would be better used by having a man in the detective bureau checking out armed robberies."

Most of the buys for the recent bust were made by a black Ypsilanti policewoman named Marilyn Horace, lately making the rounds of the preliminary exams under careful guard. Since the 47 warrants rested largely on her series of "controlled buys," or small, hand to hand street purchases, she will probably be the state's only witness in most of the cases. Most of her buys were for extremely small amounts, on the order of $20 for a few hits, and none were for over $800 for half an ounce of heroin.

While the raids didn't reduce heroin supply in the county, some observers suggested that tension on the street might raise prices anyway and boost the amount of crime necessary to support habits.

The publicity effects of the raid were immediate. In Ypsilanti the city council voted its endorsement of the WANT squad and its policewoman. And in Ann Arbor the Human Rights Party prepared a city council resolution to cut off the city's two-member participation on the team.

Like other narcotics teams across the state, WANT draws most of its agents from local departments (in Livingston and Wayne County as well as Washtenaw), but reports to the Michigan State Police Intelligence Unit.

An arm of the federal police network, the intelligence unit received a $182,000 grant for the "Michigan Intelligence Network" from the Law Enforcement Assistance Administration (LEAA) last year.

The intelligence unit is also famous for its "Red Squad," the subversive investigative division which keeps dossiers on 50,000 Michigan citizens, but like other state police organizations it has lately been been converting from hunting Reds to hunting drugs.

The undercover narcotics teams which work for the state police coordinate their activities so closely that they may not in fact be separate units. They cross jurisdictional lines with impunity, so they are not very responsive to local governments, but are to the state police authorities.

Since WANT agents habitually refuse to identify themselves by name, badge or agency on raids, they can also take great liberties with the citizenry. During a raid on an Ypsilanti Township apartment last week, for example, witnesses told the SUN that a WANT officer pistol-whipped a man who asked him for police identification.

The bust was in Washtenaw County, but the raiding party seems to have been composed largely of non-uniformed Wayne County Sheriff's deputies.

It wasn't reported in the Ann Arbor News, but the 65 officers who carried out the Ypsilanti-Ann Arbor heroin raid January 16 included a sizeable detachment from the Downriver Area Narcotics Organization (DRANO), another of the state drug squads from south of Detroit.

To arrest five persons for a hundred pound marijuana transaction in December, state narcs working with WANT proposed the deal, put up the $10,000 capital and when one of the victims smelled a rat, led him to believe they were Mafia and prone to violence.

WANT and the state police intelligence network aren't only creating an atmosphere of fear and crime around drugs which should be free and legal. They're also teaching entire communities to be wary of an incipient, undercover and secret police.