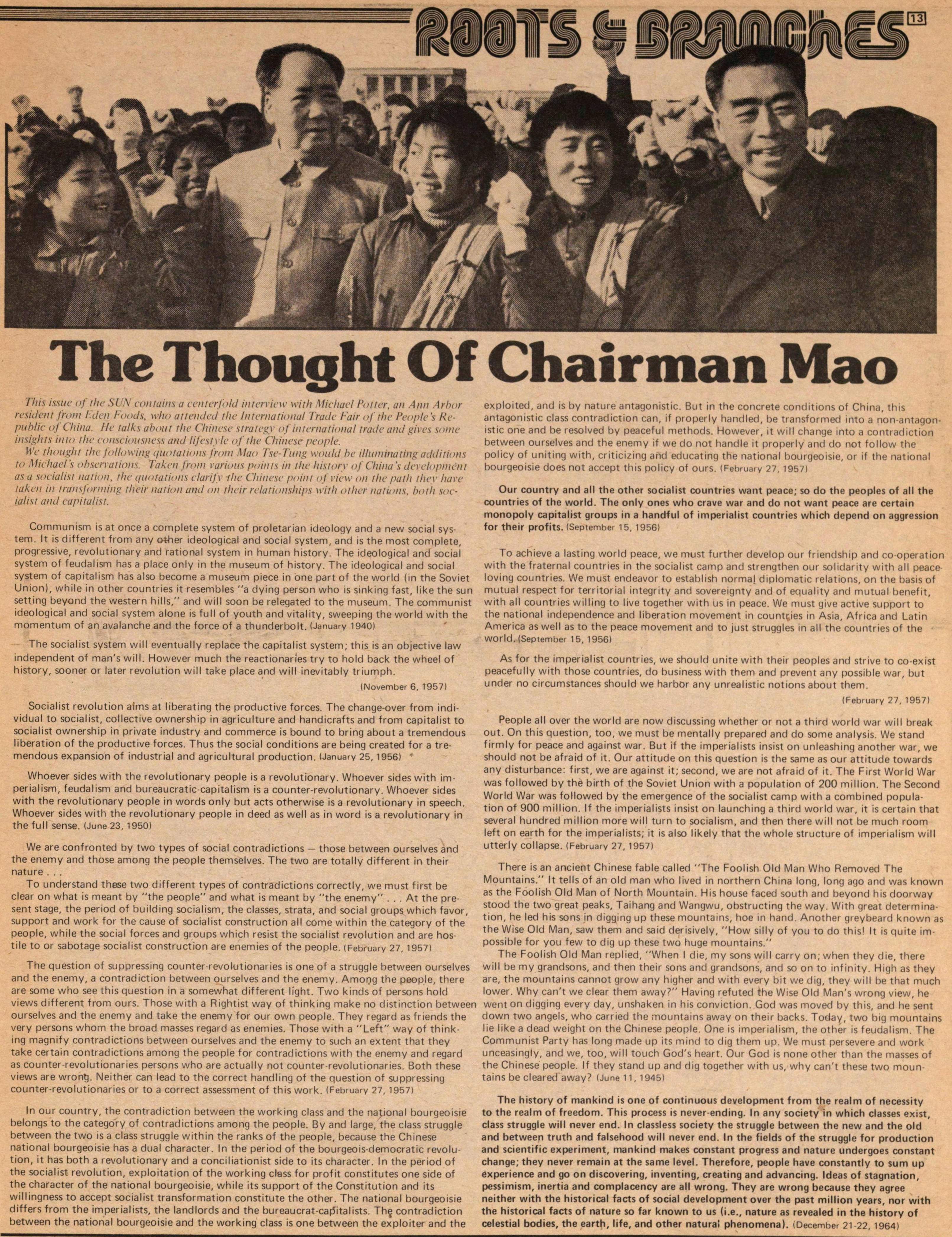 The Thought Of Chairman Mao

The issue of the SUN contains a centerfold interview with Michael Potter, an Ann Arbor resident from Eden Foods, who attended the International Trade Fair of the People's Republic of China, He talks about the Chinese strategy of international trade and gives some insights into the consciousness and lifestyle of the Chinese people.

We thought the following quotations from Mao Tse-Tung would be illuminating additions to Michael 's observations. Taken from various points in the history of China's development as a socialist nation, the quotations clarify the Chinese point of view on the path they have taken in transforming their nation and on their relationships with other nations, both socialist and capitalist.

The socialist system will eventually replace the capitalist system; this is an objective law independent of man's will. However much the reactionaries try to hold back the wheel of history, sooner or later revolution will take place and will inevitably triumph. (November 6, 1957)

Socialist revolution aims at liberating the productive forces. The change-over from individual to socialist, collective ownership in agriculture and handicrafts and from capitalist to socialist ownership in private industry and commerce is bound to bring about a tremendous liberation of the productive forces. Thus the social conditions are being created for a tremendous expansion of industrial and agricultural production. (January 25, 1956)

We are confronted by two types of social contradictions - those between ourselves and the enemy and those among the people themselves. The two are totally different in their nature ...

To understand these two different types of contradictions correctly, we must first be clear on what is meant by "the people" and what is meant by "the enemy" ... At the present stage, the period of building socialism, the classes, strata, and social groups which favor, support and work for the cause of socialist construction all come within the category of the people, while the social forces and groups which resist the socialist revolution and are hostile to or sabotage socialist construction are enemies of the people. (February 27, 1957)

Our country and all the other socialist countries want peace; so do the peoples of all the countries of the world. The only ones who crave war and do not want peace are certain monopoly capitalist groups in a handful of imperialist countries which depend on aggression for their profits. (September 15, 1956)

To achieve a lasting world peace, we must further develop our friendship and co-operation with the fraternal countries in the socialist camp and strengthen our solidarity with all peace loving countries. We must endeavor to establish normal diplomatic relations, on the basis of mutual respect for territorial integrity and sovereignty and of equality and mutual benefit, with all countries willing to live together with us in peace. We must give active support to the national independence and liberation movement in countries in Asia, Africa and Latin America as well as to the peace movement and to just struggles in all the countries of the world. (September 15, 1956)

As for the imperialist countries, we should unite with their peoples and strive to co-exist peacefully with those countries, do business with them and prevent any possible war, but under no circumstances should we harbor any unrealistic notions about them. (February 27, 1957)

People all over the world are now discussing whether or not a third world war will break out. On this question, too, we must be mentally prepared and do some analysis. We stand firmly for peace and against war. But f the imperialists insist on unleashing another war, we should not be afraid of it. Our attitude on this question is the same as our attitude towards any disturbance: first, we are against it; second, we are not afraid of it. The First World War was followed by the birth of the Soviet Union with a population of 200 million. The Second World War was followed by the emergence of the socialist camp with a combined population of 900 million. If the imperialists insist on launching a third world war, t is certain that several hundred million more will turn to socialism, and then there will not be much room left on earth for the imperialists; it is also likely that the whole structure of imperialism will utterly collapse. (February 27, 1957)

There is an ancient Chinese fable called "The Foolish Old Man Who Removed The Mountains." It tells of an old man who lived in northern China long, long ago and was known as the Foolish Old Man of North Mountain. His house faced south and beyond his doorway stood the two great peaks, Taihang and Wangwu, obstructing the way. With great determination, he led his sons in digging up these mountains, hoe in hand. Another greybeard known as the Wise Old Man, saw them and said derisively, "How silly of you to do this! It is quite impossible for you few to dig up these two huge mountains."

The Foolish Old Man replied, "When I die, my sons will carry on; when they die, there will be my grandsons, and then their sons and grandsons, and so on to infinity. High as they are, the mountains cannot grow any higher and with every bit we dig, they will be that much lower. Why can't we clear them away?" Having refuted the Wise Old Man's wrong view, he went on digging every day, unshaken in his conviction. God was moved by this, and he sent down two angels, who carried the mountains away on their backs. Today, two big mountains lie like a dead weight on the Chinese people. One is imperialism, the other is feudalism. The Communist Party has long made up its mind to dig them up. We must persevere and work unceasingly, and we, too, will touch God's heart. Our God is none other than the masses of the Chinese people. If they stand up and dig together with us, why can't these two mountains be cleared away? (June 11, 1945)

The history of mankind is one of continuous development from the realm of necessity to the realm of freedom. This process is never-ending. In any society in which classes exist, class struggle will never end. In classless society the struggle between the new and the old and between truth and falsehood will never end. In the fields of the struggle for production and scientific experiment, mankind makes constant progress and nature undergoes constant change; they never remain at the same level. Therefore, people have constantly to sum up experience and go on discovering, inventing, creating and advancing. Ideas of stagnation, pessimism, nertia and complacency are all wrong. They are wrong because they agree neither with the historical facts of social development over the past million years, nor with the historical facts of nature so far known to us (.e., nature as revealed in the history of celestial bodies, the earth, life, and other natural phenomena). December 21-22, 1964)