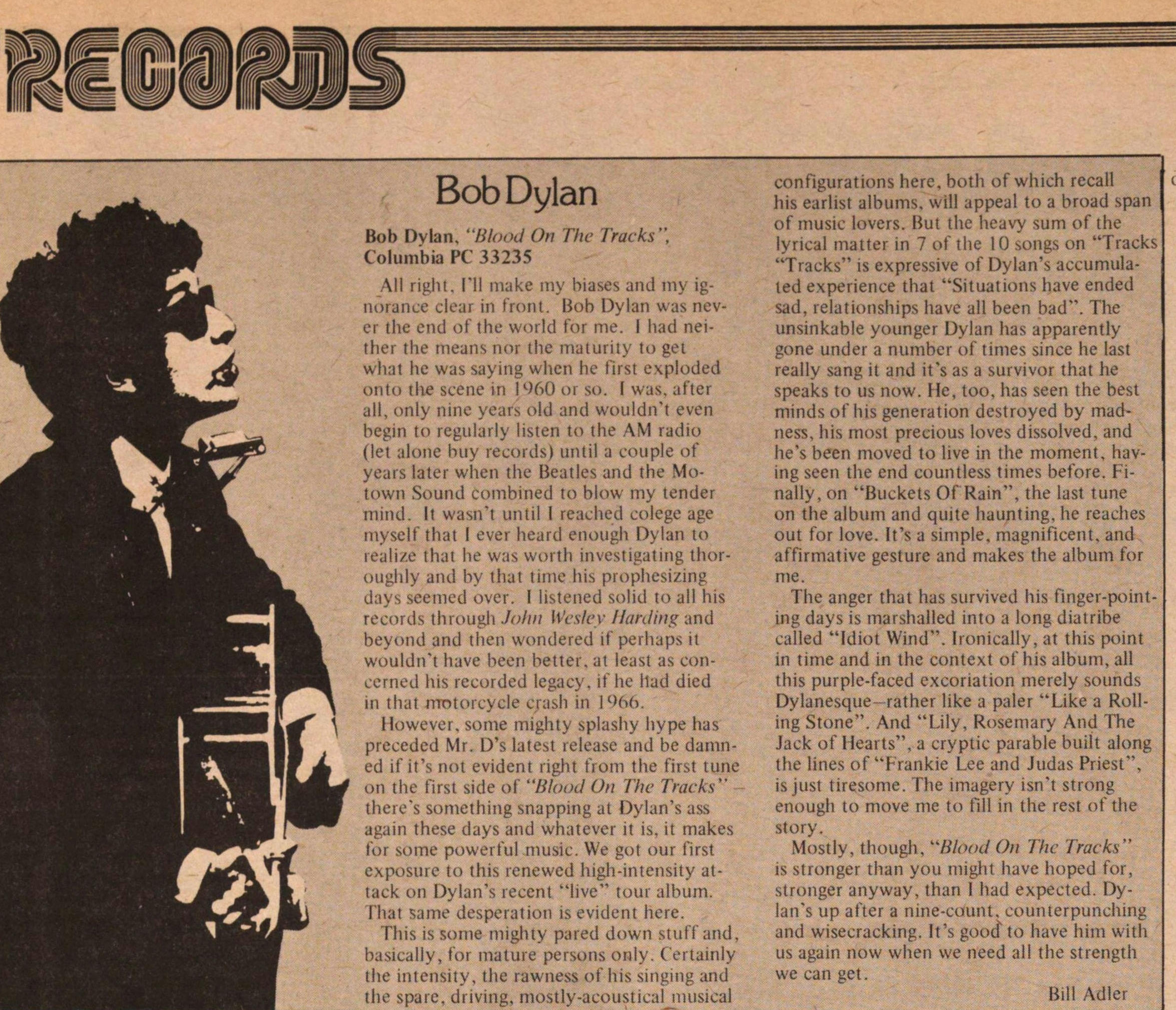 Bob Dylan. "Biood On The Tracks", Columba PC 33235 All riglit, ril make my biases and my ignorance deai in front. Bob Dylan was novcr the end of the world for me. I had neither the means nor the maturity to get wh:it ho was saying when he lïrst exploded onto the scène in ll)60 or so. I was. aller all, only irine years old and wouldn't even begin to regularly listen to the AM radio (let alone biiy records) until a couple of years later when the Beatles and the Motown Sound combined to blow my tender mind. It wasn't until I reached colcge age myself that 1 ever heard enougli Dylan to realizê that he was worth investigating thoroughly aiul by that urne his prophesizing days scemed over. I listencd solid to all lus records through John Wesley Harding and beyond and then wondered il' perhaps it wouldn't have been better. at least as concerned his recorded legacy. if he liad died in t hal rrretorcyde crash in ilMi. However, some mighty splashy hype has preceded Mr. D's laiest release and bc damned if It's not evident right from the first tune on the first side of "Blood On The Tracks" there's something snapping at Dyl.in's ass again these days and whatever it is. it makes for sorne powerful tnusic. We gijl our firsl exposure to this renewed high-imcnsity atlack on Dylan's recent "live" toui album. Ihai same desperation is evident here. This is gome mighty pared down stuft and. basically, for mature persons only. Certainly the intensiiy, the rawness of his singing and the spare, driving, mostly-acousticaJ musical configurations herc, botli of which rccall his earlist albums, wil! appeal to a broad span of music lovers. Hut the heavy sum of the lyrical matter in 7 of the lü songs on "Tracks "Tracks" is expressive of Dylan's accumulated experience that "Situations have ended sad, relationships have all been bad". The unsinkable younger Dylan has apparently gone under a number of times since he last really sang it and it's as a survivor that he speaks to us now. He, too. lias seen the best minds of his generation destroyed by madness, his most precious loves dissolved, and he's been moved to live in the moment, having seen the end cuuntless times before. Finally, on "Buckets Of Rain", the last tune on the album and quite haunting, he reaches out for love. It's a simple, magníficent, and affirmative gesture and makes the album for me. The anger that has survived his finger-pointing days is marshalled into a long diatribe called "Idiot Wind". Ironically, at this point in time and in the context of his album, all this purple-faced excoriation merely sounds Dylanesque- rather like a paler "Like a Rolling Stone". And "Lily, Rosemary And The Jack of Ileai ts", a cryptic parable built along the linos of "Frankie Lee and Judas Priest", is just tiresome. The imagery isn't strong enough to move me to fill in the rest of the story. Mostlv. thottgh, "iïleoil On The Tracks" is strongei than you miglit have hopcd for, strongfir anyway, than 1 had expected. Dylan's up after a nine-caunt, counterpunching and wisecracking. It's goos to have hini with us again now when we need all the strength we can eet .