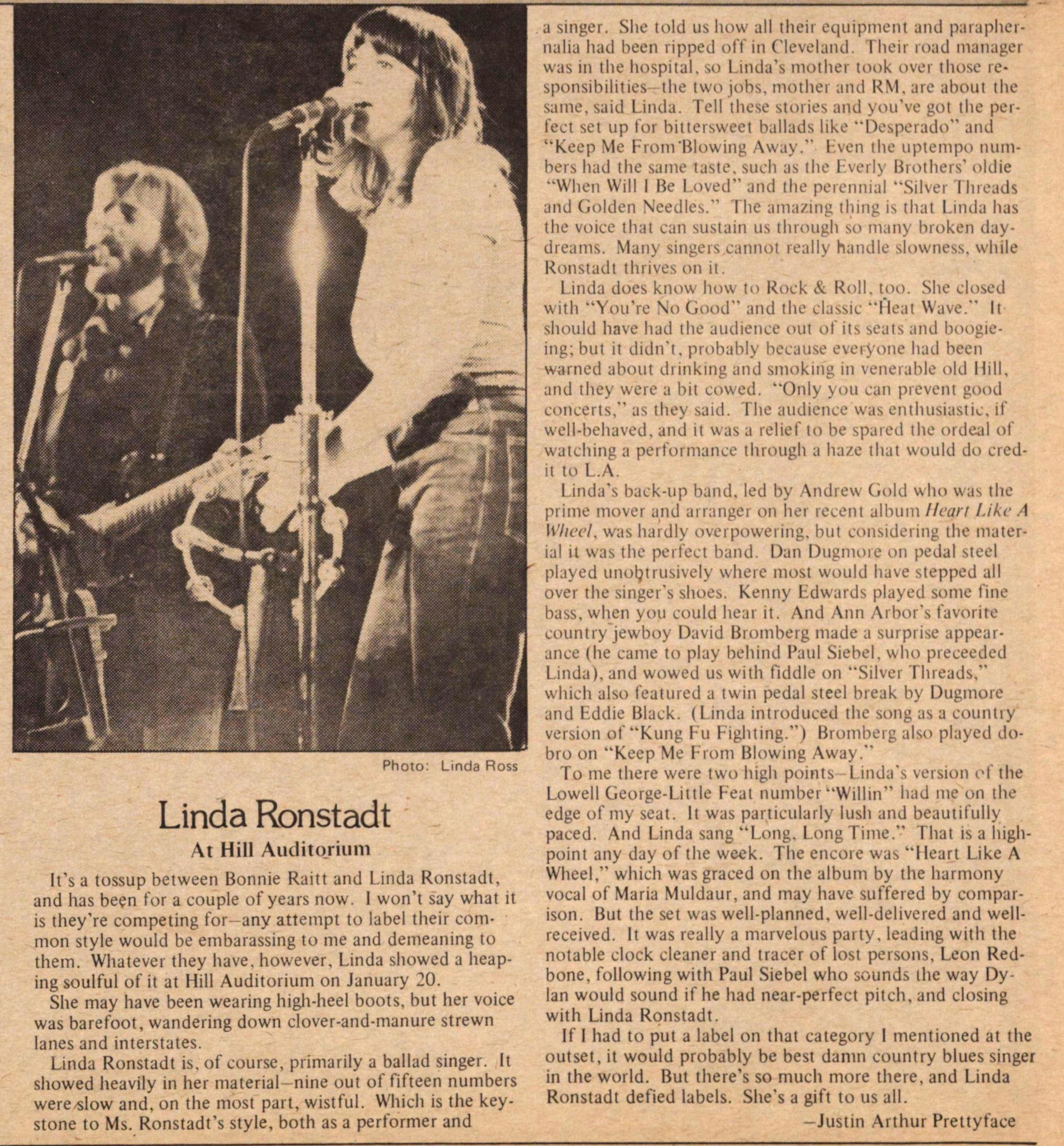 It'sa tossup between Bonnie Raitt and Linda Ronstadt, and has been tor a couple of years now. I won't say what ït is they're competing for-any attempt to label their common style would be embarassing to me and demeaning to them. Whatever they have, however, Linda showed a heaping soulful of it at Hill Auditorium on January 20. She may have been wearing high-heel boots, but her voice was barefoot, wandering down clover-and-manure strewn lanes and interstates. Linda Ronstadt is, of course, primarily a bailad singer. It showed heavily in her material nine out of fifteen numbers wereslow and, on the most part, wistful. Which is the keystone to Ms. Ronstadt's style, both as a performer and a singer. She told us liow all their equfpment and paraphernalia had been ripped off in Cleveland. I heil road managei as in the hospital, so I inda's mothet took ovei those responsibilities the two jobs, mothei and KM. are aboui the samo, said Linda. Teil these simios and you've gol the perfect set up tor bittersweel ballads like "Desperado" and "Keep Me From 'Blow ing Away." Even the uptempo nurnbers had the samo taste, sucn as the Everlj Brothers1 oldle "When Will l ik Loved"and the perennial "SUvei fhreads and (Jolden Needies." Ihe amazing thing is t ha t Linda has the voice ihai can sustain us through so many broker) daydreams. Many singers cannoi really Kandie slowness, whlle Ronstadt thrives on ii. Linda does kneu huw to Koek iV Roll. too. She closed with "You're No (lood" and the classic "fteat Wave." Ii should have had the audience oui of iis seats and boogieing; bul ii didn't, probabl) because eveiyone had heen wamed about drinking and smoking in venerable oíd I lili. and théy were a b'tí cowed. "Only you can prevent good concertó," as they said. I lie audience was enthusiastic, if well-behaved, and il was a rolief to be spared the ordeal of watching a performance through a hae that would do credii lo L.A. I inda's baek-up band. led by Andrew Gold who as the prime mover and airanger on hei recent album II cari Likt 1 Wheel, was hardly overpowerihg, but considering the material u was the perfect band. Dan Dugmore on pedal stool played unoljtrusively vvhere mosi would have stepped all over the singer's shoes. Kenny Edwards played some line bass, when yon could heat il. And Ann Arbor's favorite country jewboy David Bromberg made a surprise appearanee (he carne to play behind I'aul Siebet, who preceeded Linda), and wowed us with fïddle on "Silver Tlueads" which also featured a twin pedal steel break by Dugmore and Eddie Black. ( I inda introduced the song as a country versión of "Kung Fu Fighting.") Bromberg also played dobro on "Keep Me From Blowing Away." To me there were two high points 1 inda's version CÍ ihe 1 owell (eorge-l mie leal numbei ■"Willm" had me on the edge of my seat. lt was particularly lush and beautifully paced. And Linda sang "Long. Long Time." That is a higlipoint any day of the week. The encoré was "Heart Like A Wheel," which was graced on the album by the harmony vocal of Maria Muldaur, and may have suffered by comparison. But the set was well-planned, well-delivered and wellreceived. lt was really a marvelous party, leading with the notable clock cleaner and tracer of lost persons, Leon Redbone, following with Paul Siebel who sounds the way Dylan would sound if he had near-perfect pitch, and closing with Linda Ronstadt. If I had to put a label on that category I mentioned at the outset, it would probably be best danin country blues singer in the world. But there's so much more there, and Linda Ronstadt defied labels. She's a gift to us all.