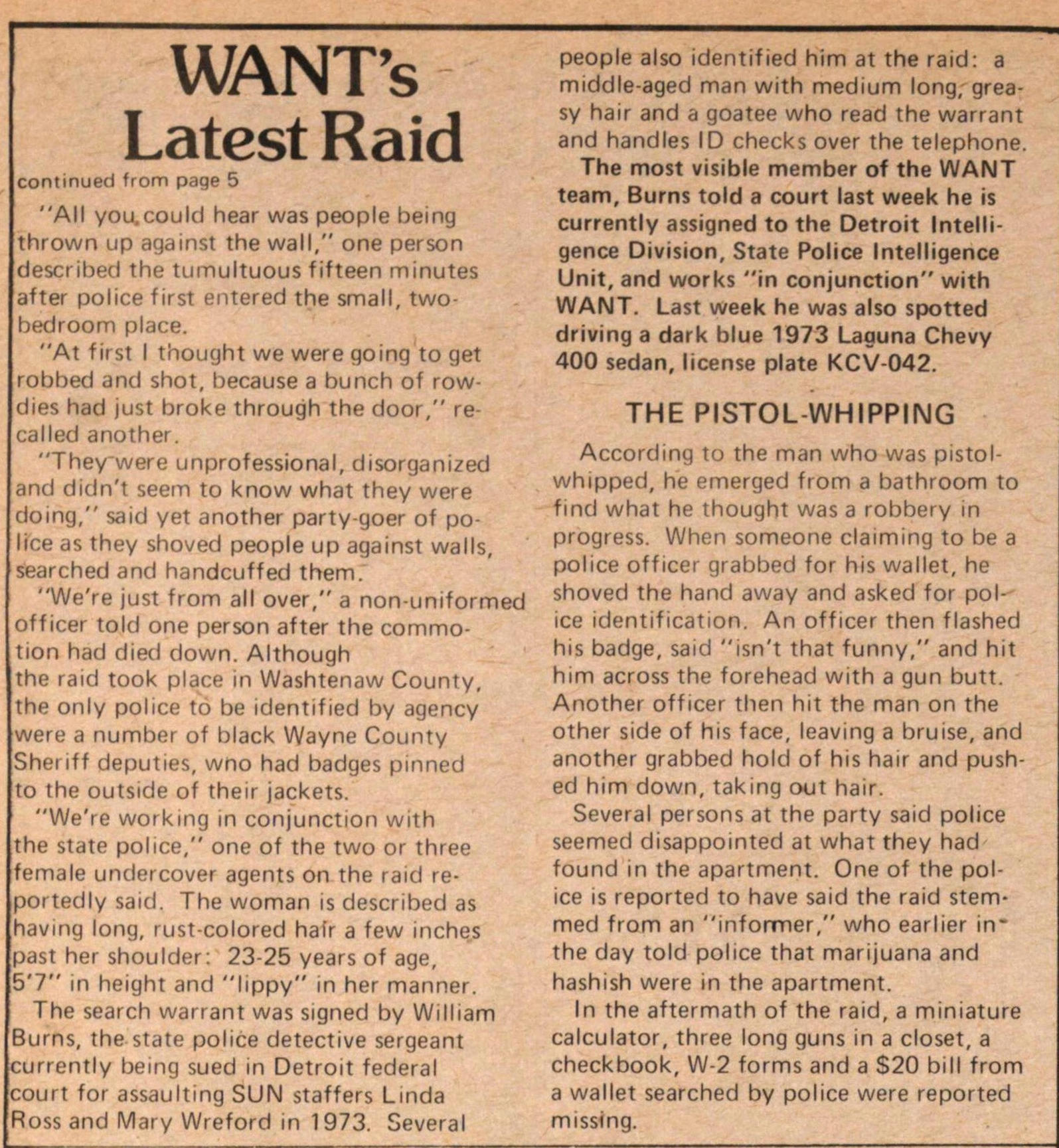 WANT's Latest Raid continued from page 5 "All you.could hear was people being thrown up against the wall," one person described the tumultuous f fteen minutes after pólice first entered the small, twobedroom place. "At first I thought we were going to get robbed and shot, because a bunch of rowdies had just broke through the door," recalled another. "Theywere unprofessional, disorganized and didn't seem to know what they were doing," said yet another party-goer of police as they shoved people up against walls, searched and handcuffed them. "We're just from all over," a non-uniformed off icer told one person after the commotion had died down. Although the raid took place in Washtenaw County, the only pólice to be identified by agency were a number of black Wayne County Sheriff deputies, wno had badges pinned to the outside of their jackets. "We're working in conjunction with the state pólice," one of the two or three female undercover agents on the raid repor tedly said. The woman is described as having long, rust-colored haír a few inches past her shoulder: 23-25 years of age, 57" in height and "lippy" in her manner. The search warrant was signed by William Burns, the state pólice detective sergeant currently being sued in Detroit federal court for assaulting SUN staffers Linda Ross and Mary Wreford in 1973. Several people also dentified him at the raid: a middle-aged man with medium long, greasy hair and a goatee who read the warrant and handles ID checks over the telephone. The most visible member of the WANT team, Burns told a court last week he is currently assigned to the Detroit Intelligence División, State Pólice Intelligence Unit, and works "in conjunction" with WANT. Last week he was also spotted driving a dark blue 1973 Laguna Chevy 400 sedan, license píate KCV-042. THE PISTOL-WHIPPING According to the man who was pistolwhipped, he emerged from a bathroom to find what he thought was a robbery in progress. When someone claiming to be a pólice officer grabbed for his wallet, he shoved the hand away and asked for police identification. An officer then f lashed his badge, said "isn't that funny," and hit him across the forehead with a gun butt. Another officer then hit the man on the other side of his face, leaving a bruise, and another grabbed hold of his hair and pushed him down, taking out hair. Several persons at the party said pólice seemed disappointed at what they had found in the apartment. One of the police is reported to have said the raid stemmed from an "informer," who earlier in the day told pólice that marijuana and hashish were in the apartment. In the aftermath of the raid, a miniature calculator, three long guns in a closet, a checkbook, W-2 forms and a S20 bilí from a wallet searched by pólice were reported missing.