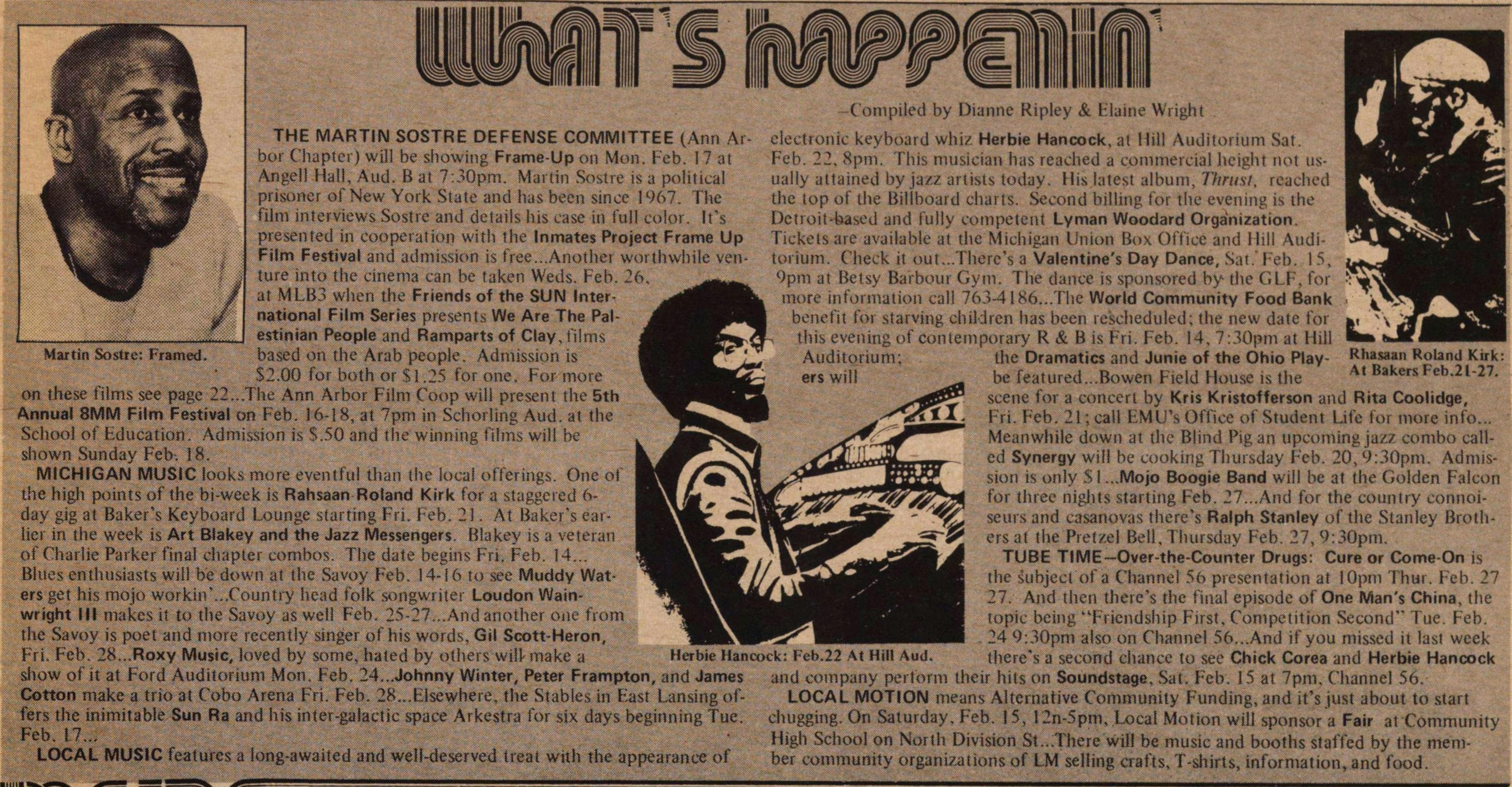 THE MARTIN SOSTRE DEFENSE COMMITTEE (Ann Arbor Chapter) will be showing Frame-Up on Mon. Feb. 17 at Angell Hall Aud. B al 7:30pm. Martin Sostre is a political prisoner of New York State and has been since 1967. The film interviews Sostre and details his case in full color. It's presented in cooperation with the Inmates Project Frame Up Film Festival and admission is free...Another worthwhile venture into the cinema can be taken Weds. Feb. 26. at MLB3 when the Friends of the SUN International Film Series presents We Are The Palestinian People and Ramparts of Clay, films based on the Arab people. Admission is $2.00 for both or $1,25 for one. For more on these films see page 22. ..The Ann Arbor Film Coop will present the 5th Annual 8MM Film Festival on Feb. 16-18, at 7pm in Schorling Aud. at the School of Education. Admission is $.50 and the winning films will be shown Sunday Feb.18.
MICHIGAN MUSIC looks more eventful than the local offerings. One of the high points of the bi-week is Rahsaan Roland Kirk for a staggered 6-day gig at Baker's Keyboard Lounge starting Fri. Feb. 21 . At Baker's earlier in the week is Art Blakey and the Jazz Messengers Blakey is a veteran of Charlie Parker final chapter combos. The date begins Fri. Feb. 14... Blues enthusiasts will be down at the Savoy Feb. 14-16 to see Muddy Waters get bhs mojo workin'... Country head folk songwriter Loudon Wainwright III makes it to the Savoy as well Feb. 25-27. .. And another one from the Savoy is poet and more recently singer of his words. Gil Scott-Heron, Fri. Feb. 28...Roxy Music, loved by some, hated by others will make a show of it at Ford Auditorium Mon. Feb. 24...Johnny Winter, Peter Frampton, and James Cotton make a trio at Cobo Arena Fri. Feb. 28...Elsewhere, the Stables in Fast Lansing offers the inimitable Sun Ra and his inter-galactic space Arkestra for six days beginning Tue. Feb. 17...
LOCAL MUSIC features a long-awaited and well-deserved treat with the appearance of electronic keyboard whiz Herbie Hancock, at Hill Auditorium Sat. Feb. 22, 8pm. This musician has reached a commercial height not usually attained by jazz artists today. His latest album, Thrust, reached the top of the  Billboard charts. Second billing for the evening the Detroit-based and fully competent Lyman Woodard Organization. Tickets are available at the Michigan Union Box Office and Hill Auditorium. Check it out...There's a Valentine's Day Dance, Sat. Feb. 15, 9pm at Betsy Barbour Gym. The dance is sponsored by the GLF, for more information call 763-4186.. .
The World Community Food Bank benefit for starving children has been rescheduled; the new date for this evening of contemporary R & B is Fri. Feb. 14. 7:30pm at Hill Auditorium: the Dramatics and Junie of the Ohio Players will be featured...Bowen Field House is the scene for a concert by Kris Kristofferson and Rita Coolidge, Fri. Feb. 21; call EMU's Office of Student Life for more info...
Meanwhile down at the Blind Pig an upcoming jazz combo called Synergy will be cooking Thursday Feb. 20, 9:30pm, Admission is only $1 ...Mojo Boogie Band will be at the Golden Falcon for three nights starting Feb. 27. ..And for the country connoisseur and casanovas there's Ralph Stanley of the Stanley Brothers at the Pretzel Bell, Thursday Feb. 27, 9:30pm.
TUBE TIME-Over-the-Counter Drugs. Cure or Come-On is the subject of a Channel 56 presentation at l0pm Thur. Feb. 27 And then there's the final episode of One Man's China, the topic being "Friendship First, Competition Second" Tue. Feb. 24 9:30pm also on Channel 56. ..And if you missed it last week there's a second chance to see Chick Corea and Herbie Hancock and company perform their hits on Soundstage. Sat. Feb.15 at 7pm. Channel 56.
LOCAL MOTION means Alternative Community Funding, and it's just about to start chugging. On Saturday. Feb. 15, 12n-5pm, Local Motion will sponsor a Fair at Community High School on North Division St...There will be music and booths staffed by the member community organizations of LM selling crafts, T-shirts, information,and food.