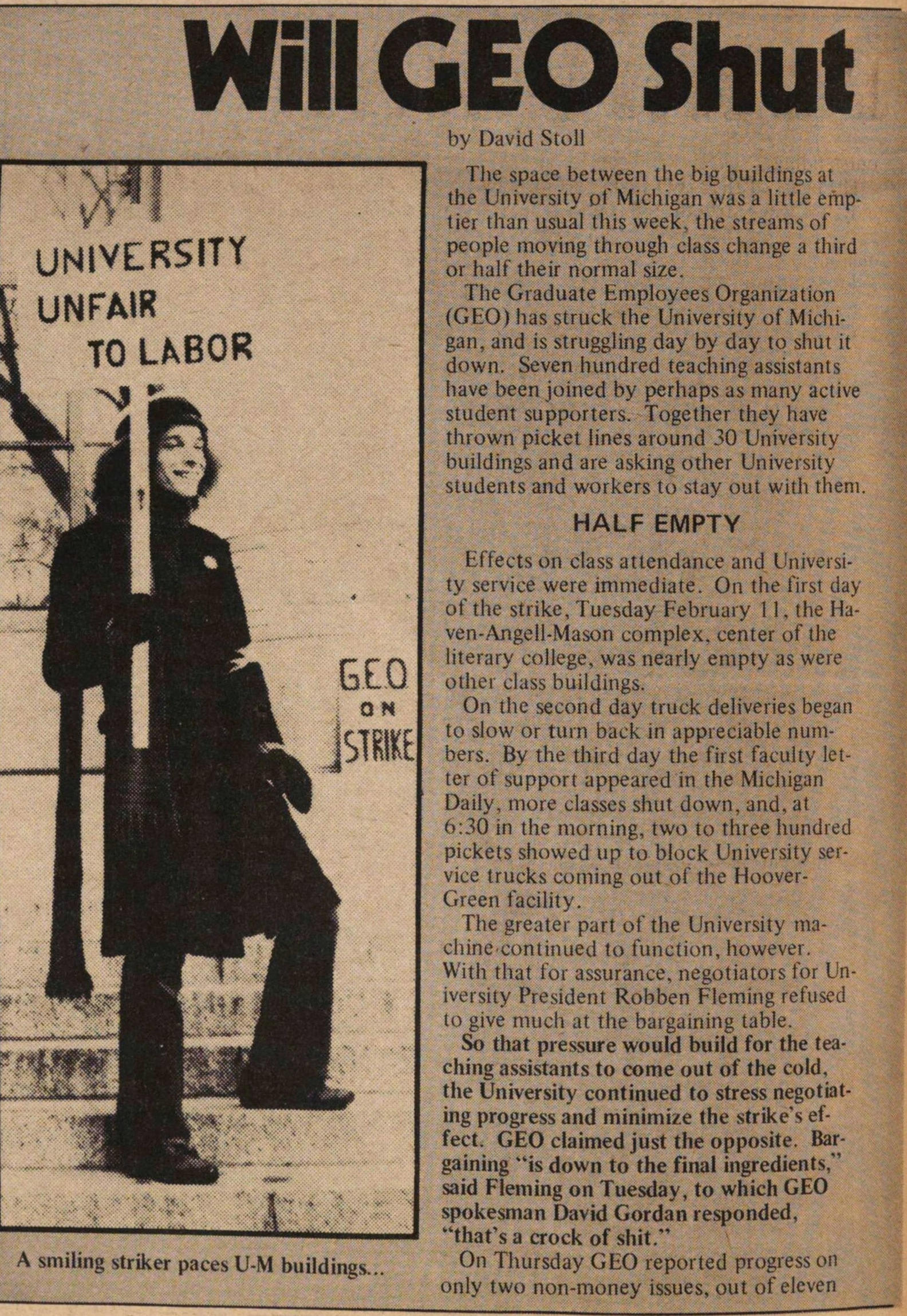 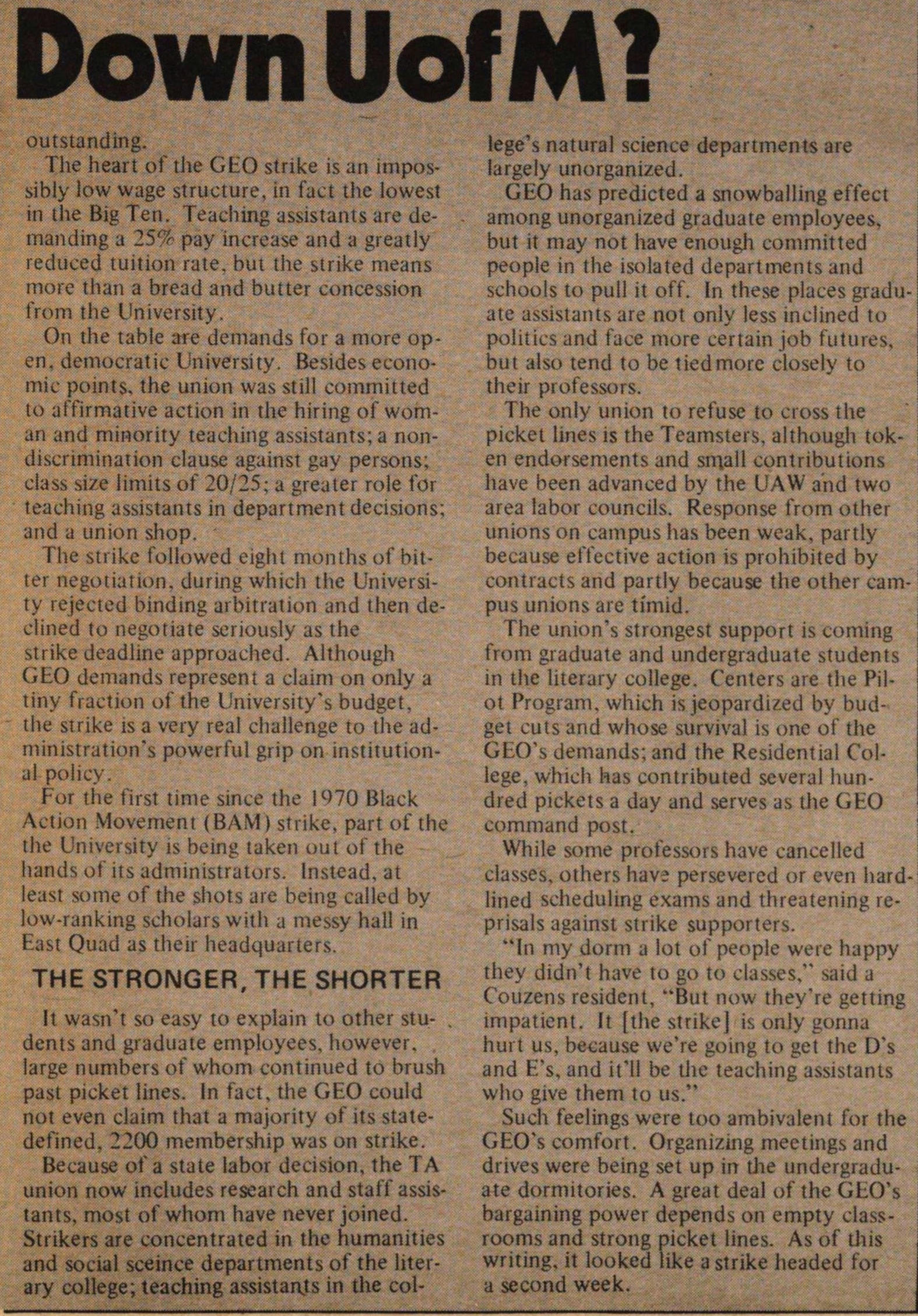 The space between the big buildings at the University of Michigan was a little eniptier than usual this week. the streams of people moving through class change a third or half the ir normal size. The Gradúate Employees Organization (GEO) has struck the University of Michigan, and is struggling day by day to shut it down. Seven hundred teaching assistants have been joined by perhaps as many active student supporters. Together they have thrown picket lines around 30 University buildings and are asking other University studems and workers to stay out with theni. HALF EMPTY Effects on class attendance and University service were immediate. On the first day of the strike, Tuesday February 1 1 . the Haven-Angell-Mason complex, center of the literary college, was nearly empty as were other class buildings. On the second day truck deliveries began to slow or turn back in appreciable numbers. By the third day the first faculty letter of support appeared in the Michigan Daily, more classes shut down, and, at 6:30 in the morning, two to three hundred pickets showed up to block University service trucks coming out of the HooverGreen facility. The greater part of the University machinecontinued to function, however. With that for assurance, negotiators tbr University President Robben Fleming refused to give much at the bargaining table. So that pressure would build for the teaching assistants to come out of the cold, the University continued to stress negotiating progress and minimize the strike's effect. GEO claimed just the opposite. Bargaining "is down to the final ingrediente," said Fleming on Tuesday, to which GEO spokesman David Gordan responded, "that's a crock of shit." On Thursday GEO reported progress on only two non-money issues, out of eleven outstanding. The heart of the GliO strike is an impossibly low wage structure, in fact the lowest in the Big Ten. Teaching assistants are demanding a 2Srí pay increase and a greatly redueed tuilion rate, bui the strike means more than a bread and buíter concession frorn the University. On the table are demands for a more open, democratie University. Besides economie points, the union was still committed to affirmative action in the hiring of woman and minority teaching assistants; a nondiscriminaiion clause against gay persons; elass sie limits of 2025; a greater role for teaching assistants in department decisions; and a union shop. The strike followed eight months of bitier negotiaiion, during which the University rejected binding arbitration and then dectined to negotiate seriously as the strike deadline approached. Although (jEO demands represent a claim on only a tiny fraction of the University's budget. the strike isa very real challenge to the administratipn's powerful grip on instituí ionui policy. F:or the first time since the 1 070 Black Action Movement (BAM) strike, part of the the University is being taken out of the hands of ts administrators. Instead, at least some of the shots are being called by low-ranking scholars with a messy hall in East Quad as their headquarters. THE STRONGER, THE SHORTER It wasn't so easy to explain to other . dents and gradúate employees, however. large numbers of whom continued to brush past picket Unes. In fact, the GEO could not even claim that a majority of its statedefined. 2200 membership was on strike. Because of a state labor decisión, the TA union now includes research and staff assistants, most of whom have never joined. Suikers are concentrated in the humanities and social sceince departments of the literary college teaching assistants in the lege's natura] science departments are largely unorganized. GliO has predicted a snowballing effect among unorganized gradúate employees, but it may not have enougli committed people in the isolated departments and schools to pull it off. In these places gradúate assistants are not only less inclined to politics and face more certain job fu tures, but also tend to be tiedmore ciosely to their professors. The only union to refuse to cross the picket lines is the Teamsters. although token endorsenients and small contributions have been advanced by the UAW and two ai ea labor councils. Response from other unions on campus has been wcak, partly because effective action is prohibited by contracts and partly because the other campus unions are timid. The union's strongest support is coming from gradúate and undergr3duate students in the literary college. Centers are tiie Pilot Program, which is jeopardized by budget cuts and whose survival is one of the GEO's demands; and the Residential College, which kas contributed several hundred pickets a day and serves as (he GEO command post. While some professors have cancelled classes, others have persevercd or even hardlined scheduling exams and threatening reprisais against strike supporters. "In my dorm a lot of people were happy they didn't have to go to classes," said a Couzens resident, "But now they're getting impatient. it [the strike] isonjygonna hui t us, because vve're going to get the D's and E's, and it'll be the teaching assistants who give them to us." Such feelings were too ambivalent for the GEO 's comfort. Organizing meetings and drives were being set up in the undergraduate dormitories. A great deal of the GEO's bargaining power depends on empty classrooms and strong picket lines. As of this writing, it looked like a strike lieaded for a second week.