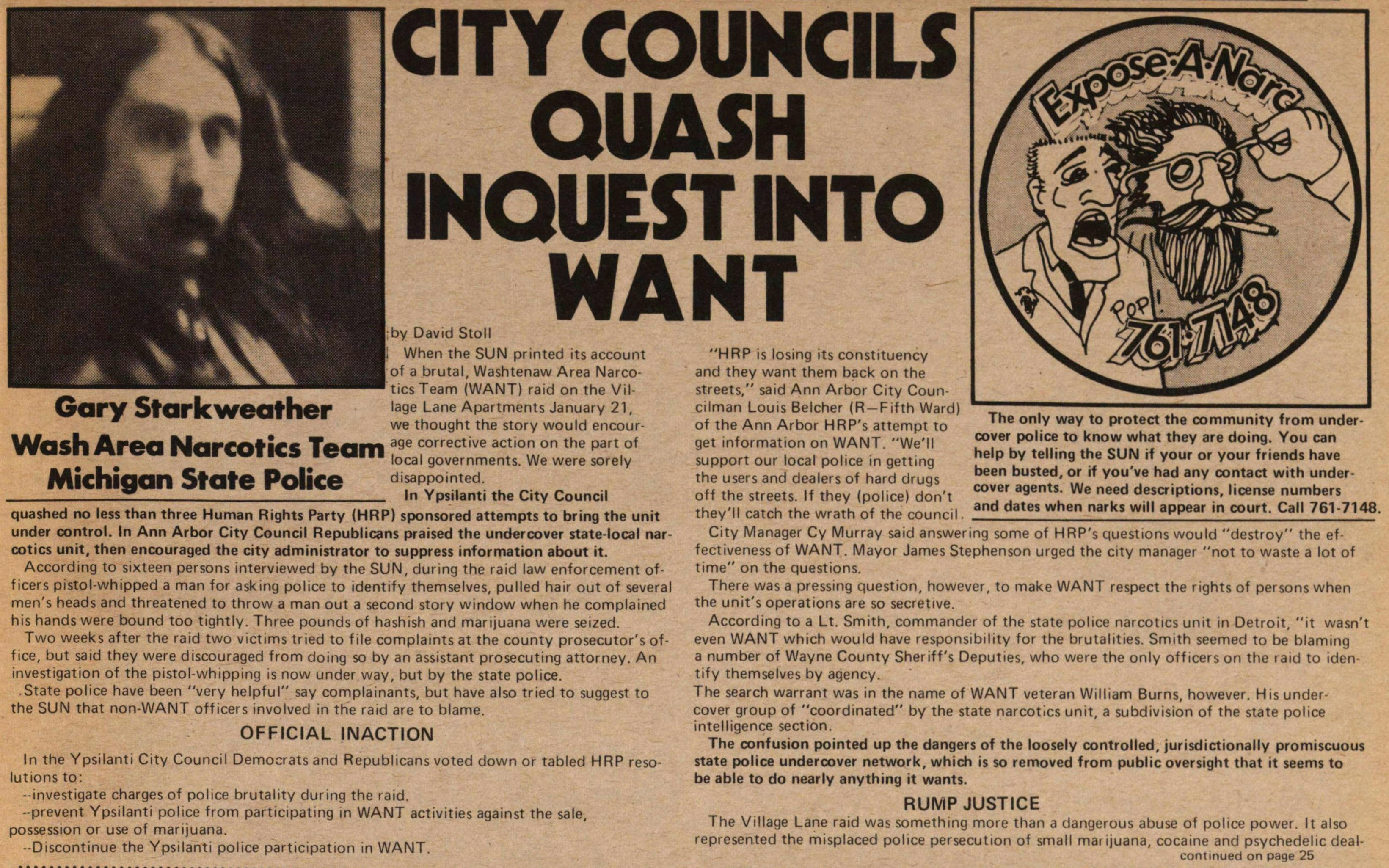 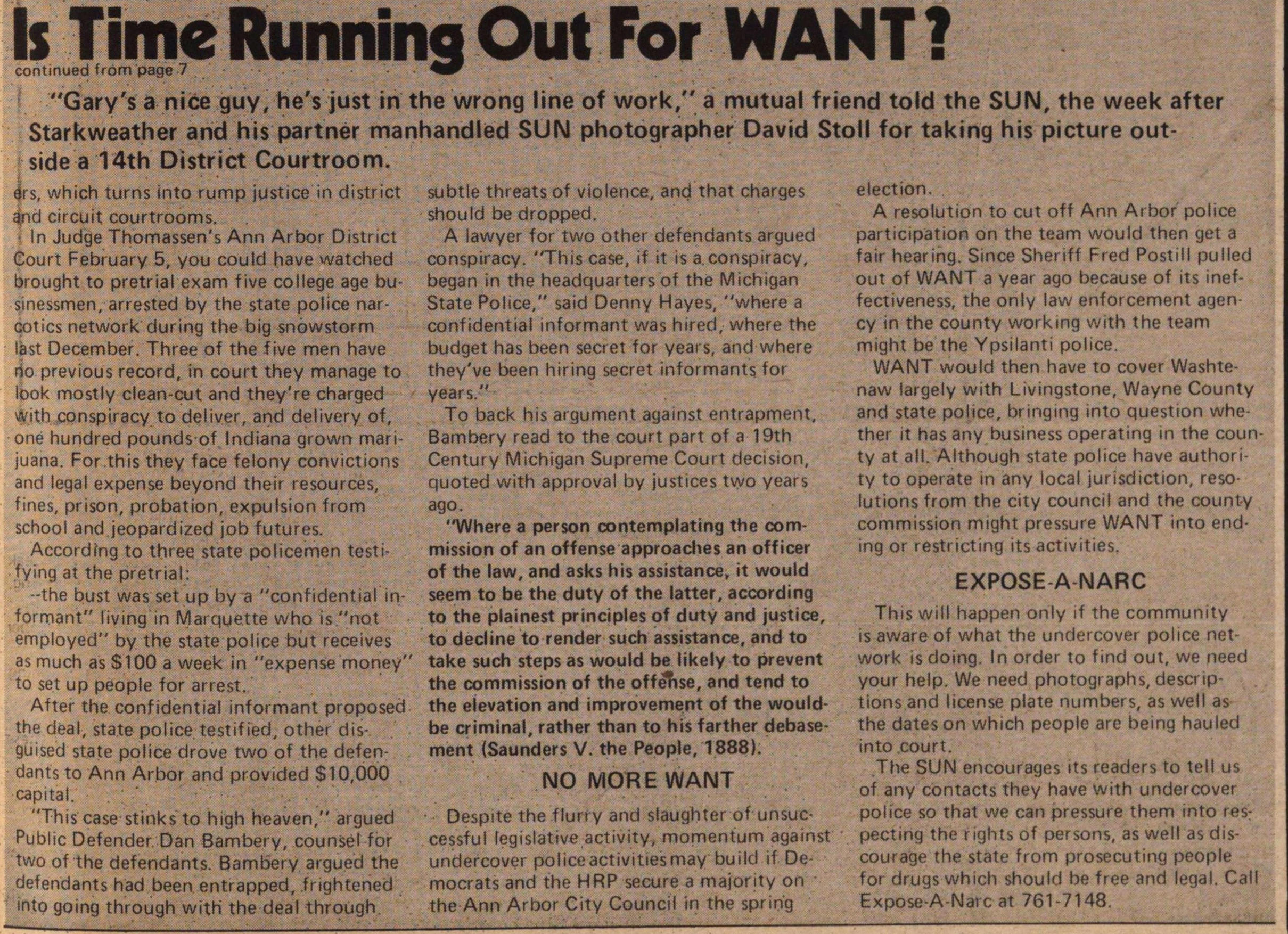 When the SUN printed its account of a brutal, Washtenaw Area NarcoticsTeam (WANT) raid on the Village Lane Apartments January 21, we thought the story would encourage corrective action on the part of local governments. We were sorely disappointed.

In Ypsilanti the City Council quashed no less than three Human Rights Party (HRP) sponsored attempts to bring the unit under control. In Ann Arbor City Council Republicans praised the undercover state-local narcotics unit, then encouraged the city administrator to suppress information about it.

According to sixteen persons interviewed by the SUN, during the raid law enforcement officers pistol-whipped a man for asking police to identify themselves, pulled hair out of several men's heads and threatened to throw a man out a second story window when he complained his hands were bound too tightly. Three pounds of hashish and marijuana were seized.

Two weeks after the raid two victims tried to file complaints at the county prosecutor's office, but said they were discouraged from doing so by an assistant prosecuting attorney. An investigation of the pistol-whipping is now under way, but by the state police.

State police have been "very helpful" say complainants, but have also tried to suggest to the SUN that non-WANT officers involved in the raid are to blame.

In the Ypsilanti City Council Democrats and Republicans voted down or tabled HRP resolutions to:

--investigate charges of police brutality during the raid.

--prevent Ypsilanti police from participating in WANT activities against the sale, possession or use of marijuana.

"HRP is losing is constituency and they want them back on the streets," said Ann Arbor City Councilman Louis Belcher (R--Fifth Ward) of the Ann Arbor HRP's attempt to get information on WANT. "We'll support our local police in getting the users and dealers of hard drugs off the streets. If they (police) don't they'll catch the wrath of the council.

City Manager Cy Murray said answering some of HRP's questions would "destroy" the effectiveness of WANT. Mayor James Stephenson urged the city manager "not to waste a lot of time" on the questions.

There was a pressing question, however, to make WANT respect the rights of persons when the unit's operations are so secretive.

According to a Lt. Smith, commander of the state police narcotics unit in Detroit, "it wasn't even WANT which would have responsibility for the brutalities. Smith seemed to be blaming a number of Wayne County Sheriff's Deputies, who were the only officers on the raid to identify themselves by agency.

The search warrant was in the name of WANT veteran William Burns, however. His undercover group of "coordinated" by the state narcotics unit, a subdivision of the state police intelligence section.

The confusion pointed up the dangers of the loosely controlled, jurisdictionally promiscuous state police undercover network, which is so removed from public oversight that it seems to be able to do nearly anything it wants.

The Village Lane raid was something more than a dangerous abuse of police power. It also represented the misplaced police persecution of small marijuana, cocaine and psychedelic dealers

The only way to protect the community from undercover police to know what they are doing. You can help by telling the SUN if your or your friends have been busted, or if you've had any contact with undercover agents. We need descriptions, license numbers and dates when narks will appear in court. Call 761-7148.

Is Time Running Out For WANT?

"Gary's a nice guy, he's just in the wrong line of work," a mutual friend told the SUN, the week after Starkweather and his partner manhandled SUN photographer David Stoll for taking his picture outside a 14th District Courtroom.

which turns into rump justice in district and circuit courtrooms. In Judge Thomassen's Ann Arbor District Court February 5, you could have watched brought to pretrial exam five college age businessmen, arrested by the state police narcotics network during the big snowstorm last December. Three of the five men have no previous record, in court they manage to look mostly clean-cut and they're charged with conspiracy to deliver, and delivery of, one hundred pounds of Indiana grown marijuana. For this they face felony convictions and legal expense beyond their resources, fines, prison, probation, expulsion from school and jeopardized job futures.

According to three state policemen testifying at the pretrial:

--the bust was set up by a "confidential informant" living in Marquette who is "not employed" by the state police but receives as much as $100 a week in "expense money" to set up people for arrest.

After the confidential informant proposed the deal, state police testified, other disguised state police drove two of the defendants to Ann Arbor and provided $10,000 capital.

"This case stinks to high heaven," argued Public Defender. Dan Bambery, counsel for two of the defendants. Bambery argued the defendants had been entrapped, frightened into going through with the deal through subtle threats of violence, and that charges should be dropped.

A lawyer for two other defendants argued consptracy. "This case, if its a conspiracy, began in the headquarters of the Michigan State Police," said Denny Hayes, "where a confidential informant was hired, where the budget has been secret for years, and where they've been hiring secret informant? for years."

To back his argument against entrapment, Bambery read to the court part of a 19th Century Michigan Supreme Court decision, quoted with approval by justices two years ago.

"Where a person contemplating the commission of an offense approaches an officer of the law, and asks his assistance, it would seem to be the duty of the latter, according to the plainest principles of duty and justice, to decline to render such assistance, and to take such steps as would be likely to prevent the commission of the offense  and tend to the elevation and improvement of the would be criminal, rather than to his farther debasement (Saunders V. the People, 1888).

Despite the flurry and slaughter of unsuccessful legislative activity, momentum against undercover police activities may build if Democrats and the HRP secure a majority on the Ann Arbor City Council in the spring election.

A resolution to cut off Ann Arbor police participation on the team would then get a fair hearing. Since Sheriff Fred Postill pulled out of WANT a year ago because of its ineffectiveness, the only law enforcement agency in the courtty working with the team might be the Ypsilanti police.

WANT would then have to cover Washtenaw largely with Livingstone, Wayne County and state police, bringing into question whether it has any business operating in the county at all. Although state police have authority to operate in any local jurisdiction, resolutions from the city council and the county commission might pressure WANT into ending or restricting its activities.

This will happen only if the community is aware of what the undercover police network is doing. In order to find out, we need your help. We need photographs, descriptions and license plate numbers, as well as the dates on which people are being hauled into court.

The SUN encourages its readers to tell us of any contacts they have with undercover police so that we can pressure them into respecting the rights of persons, as well as discourage the state from prosecuting people for drugs which should be free and legal. Call Expose-A-Narc at 761-7148.