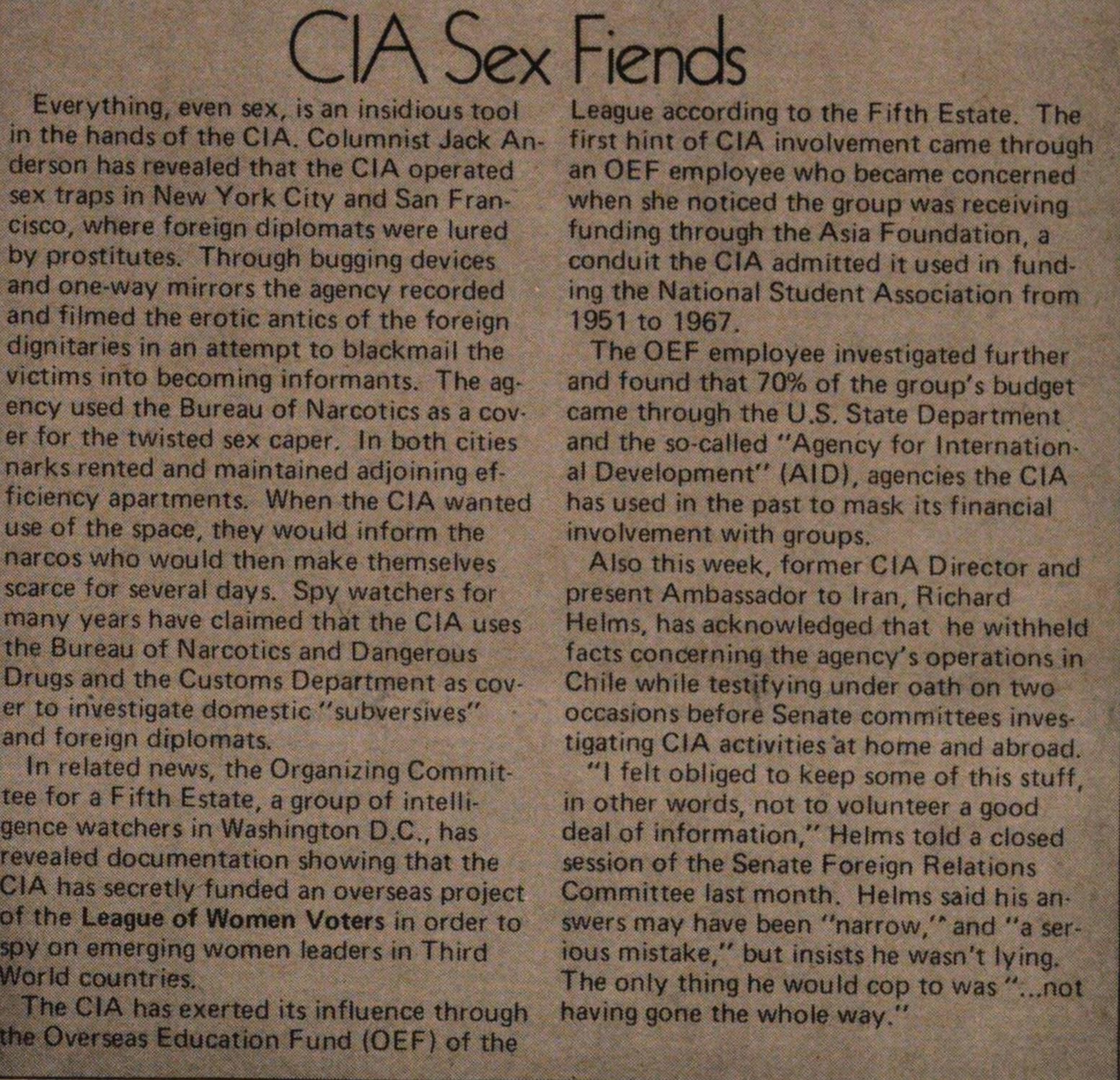 Everything, even sex, is an insidious tool in the hands of the CIA. Columnist Jack Anderson has revealed that the CIA operated sex traps in New York City and San Francisco, where foreign diplomat were lured by prostitutes. Through bugging devices and one-way mirrors the agency recorded and filmed the erotic antics of the foreign dignitaries in an attempt to blackmail the victims into becoming informants. The agency used the Bureau of Narcotics as a cover for the twisted sex caper. In both cities narks rented and maintained adjoining efficiency apartments. When the CIA wanted use of the space, they would inform the narcos who would then make themselves scarce for several days. Spy watchers for many years have claimed that the CIA uses the Bureau of Narcotics and Dangerous Drugs and the Customs Department as cover to investigate domestic "subversives" and foreign diplomats.

In related news, the Organizing Committee for a Fifth Estate, a group of intelligence watchers in Washington D.C., has revealed documentation showing that the CIA has secretly funded an overseas project of the League of Women Voters in order to spy on emerging women leaders in Third World countries.

The CIA has exerted its influence through the Overseas Education Fund (OEF) of the League according to the Fifth Estate. The first hint of CIA involvement came through an OEF employee who became concerned when she noticed the group was receiving funding through the Asia Foundation, a conduit the CIA admitted it used in funding the National Student Association from 1951 to 1967.

The OEF employee investigated further and found that 70% of the group's budget came through the U.S. State Department and the so-called "Agency for International Development" (AID), agencies the CIA has used in the past to mask its financial involvement with groups.

Also this week, former CIA Director and present Ambassador to Iran, Richard Helms, has acknowledged that he withheld facts concerning the agency's operations in Chile while testifying under oath on two occasions before Senate committees investigating CIA activities at home and abroad.

"I felt obliged to keep some of this stuff, in other words, not to volunteer a good deal of information," Helms told a closed session of the Senate Foreign Relations Committee last month. Helms said his answers may have been "narrow,' and "a serious mistake," but insists he wasn't lying. The only thing he would cop to was "...not having gone the whole way."