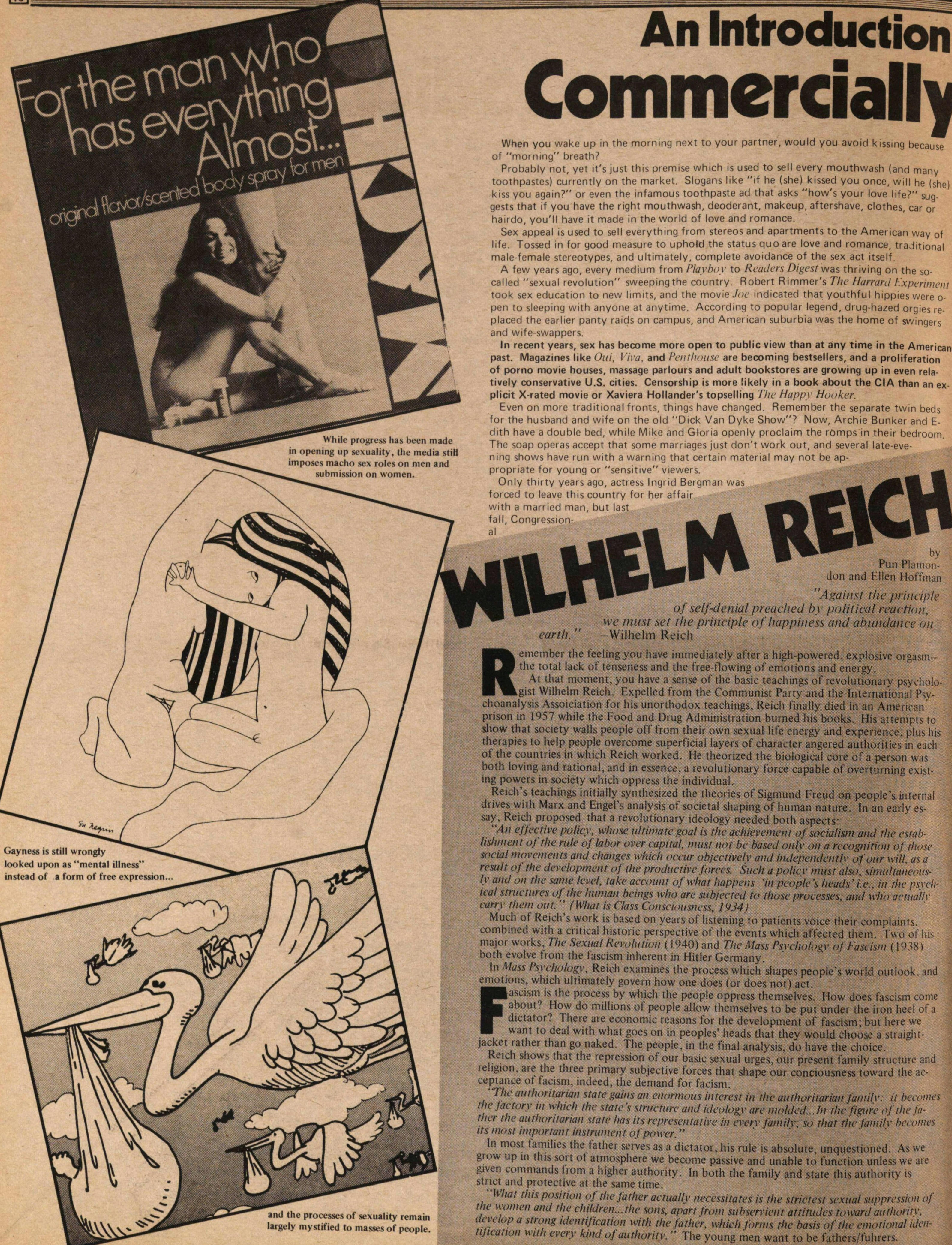 When you wake up in the morning next to your partner, would you avoid kissing because of "morning" breath? Probably not, yet it's just this premise which is used to sell every mouthwash (and many toothpastes) currently on the market. Slogans like "f he (she) kissed you once, will he (she) kiss you again?" or even the infamous toothpaste ad that asks "how's your love life?" suggests that if you have the right mouthwash, deoderant, makeup, aftershave, clothes, car or hairdo, you'll have it made in the world of love and romance. Sex appeal is used to sell everything from stereos and apartments to the American way of life. Tossed in for good measure to uphold the status quo are love and romance, traditional male-female stereotypes, and ultimately, complete avoidance of the sex act itself. A few years ago, every medium from Playboy to Readers Digesl was thriving on the socalled "sexual revolution" sweepingthe country. Robert Rimmer's The Harranl Experiment took sex education to new limits, and the movie Jnc indicated that youthful hippies were open to sleeping with anyone at anytime. According to popular legend, drug-hazed orgies replaced the earlier panty raids on campus, and American suburbia was the home of swingers and wife-swappers. In recent years, sex has become more open to public view than at any time in the American past. Magazines like Oui, Viva, and Penthouse are becoming bestsellers, and a proliferation of porno movie houses, massage parlours and adult bookstores are growing up in even relatively conservative U.S. cities. Censorship is more ükely in a book about the CIA than an ex plicit X-rated movie or Xaviera Hollander's topselling The Happy Hooker. Even on more traditional fronts, things have changed. Remember the separate twin beds for the husband and wife on the old "Dick Van Dyke Show"? Now, Archie Bunker and Edith have a doublé bed, while Mike and Gloria openly proclaim the römps in their bedroom. The soap operas accept that some marriages just don't work out, and several late-evening shows have run with a warning that certain material may not be propriate for young or "sensitive" viewers. Only thirty years ago, actress Ingrid Bergman was forced to leave this country for her affair with a marned man, but last f all. Congressional Tossed in for good measure to uphold the status quo are love and romance, traditional male-female stereotypes, and ultimately, complete avoidance of the sex act itself . powerhouse Wilbur Mills was re-elected despite the raging controversy over his affair with Fanny Fox. Although sex seems to have come out of the closets in the past few years, the view of sexuality now in the public eye remains superficial and twisted. Sexual innuendos domínate the mass media, but are tightly intertwined with violence, machismo, and morality more typical of the Puritan era. The sexuality presented to America by Madison Avenue and the networks is uptight, success-oriented, and still perpetuates stifling, narrow malefemale roles. It continúes to define gayness as a form of mental disorder, when the actual disorder lies with those projecting images of deceit and male supremacy as the sexual norm. While there s more openness than before, the physical realities and techniquesof sexual love remain basically mystified to much of the population. Sex education s still prohibited n many schools and rarely is it even suggested íhat sex s a normal, pleasureable human function like eating or walking. Birth control information s still not readily available, nor s a completely safe, relíable method of fertilization prevention yet on the market. In this issue of the SUN, we attempt a look at some of the continuing problems and misconceptions concerning human sexuality. But this subject as a whole is beyond the scope of any single publication, and the articles that follow are by no means def initive- they can barely touch the surface. We hope to continue such coverage in the future. "Love, work, and knowledge are the well springs of life. They should also govern it." ..„j I