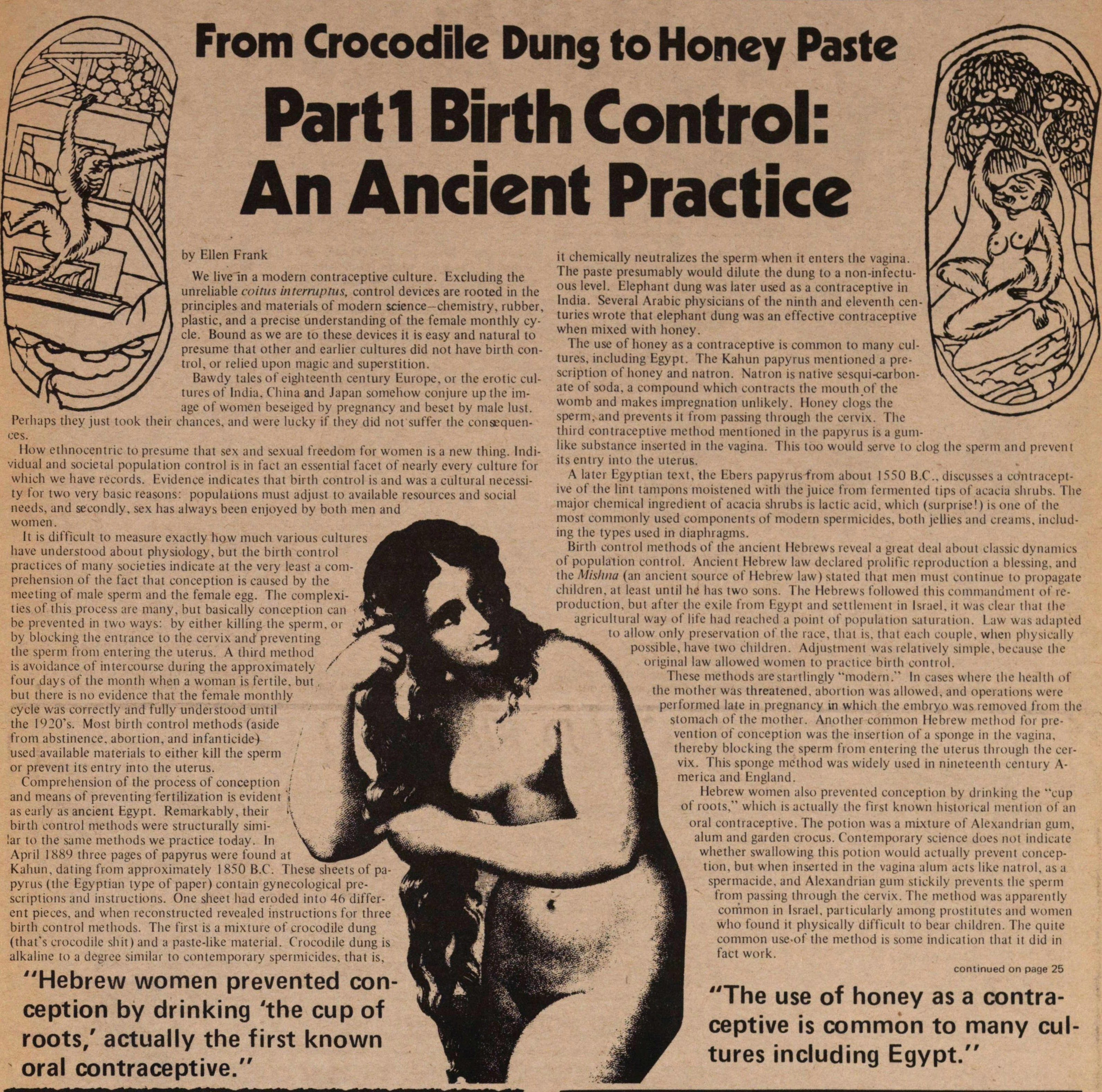 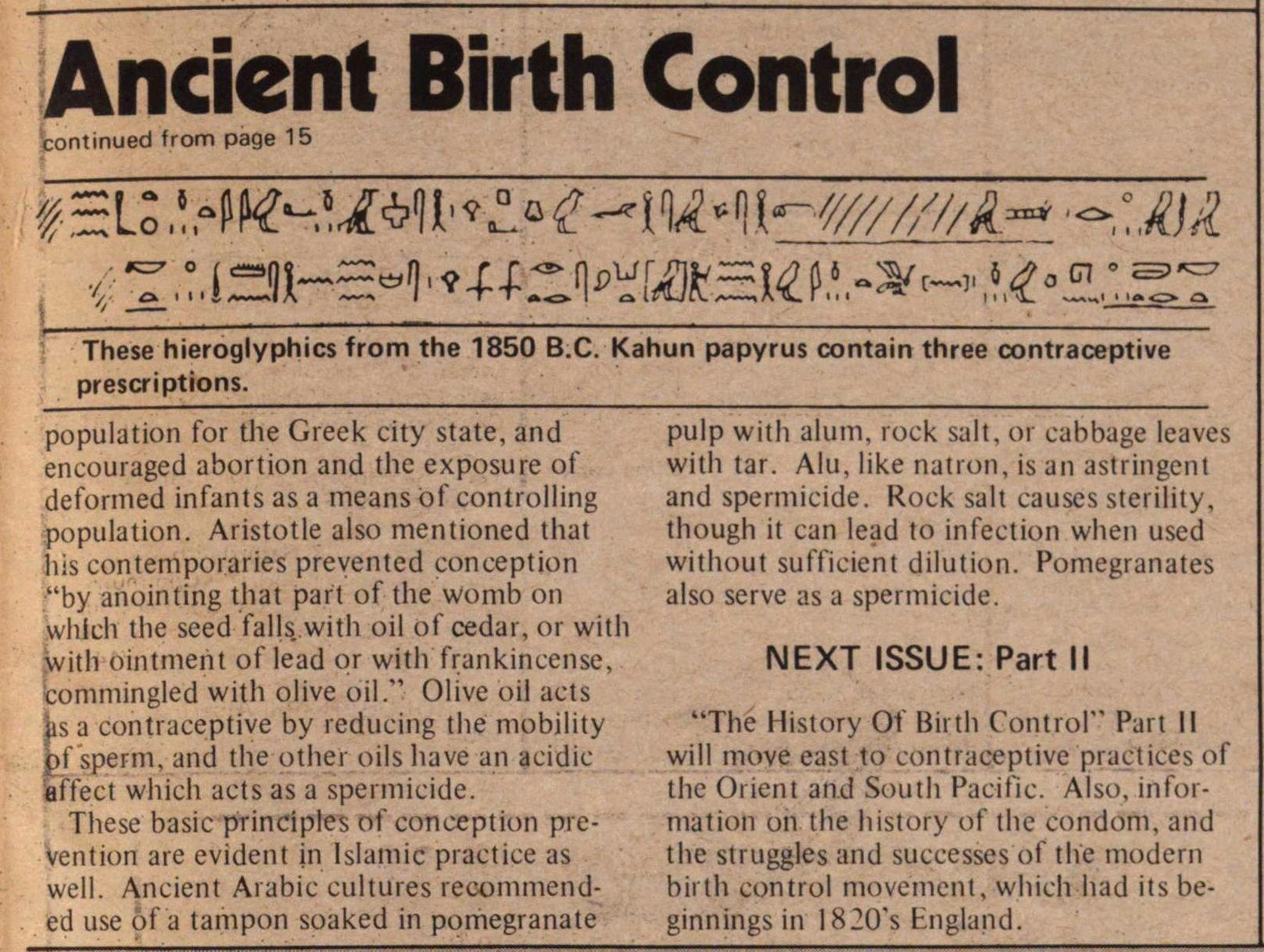 From Crocodile Dung to Honey Paste

We live In a modern contraceptive culture. Excluding the unreliable coitus interruptus, control devices are rooted in the principles and materials of modern science-chemistry, rubber, plastic, and a precise understanding of the female monthly cycle. Bound as we are to these devices it is easy and natural to presume that other and earlier cultures did not have birth control, or relied upon magic and superstition.

How ethnocentric to presume that sex and sexual freedom for women is a new thing. Individual and societal population control is in fact an essential facet of nearly every culture for which we have records. Evidence indicates that birth control is and was a cultural necessity for two very basic reasons: populations must adjust to available resources and social needs, and secondly, sex has always been enjoyed by both men and women.

It is difficult to measure exactly how much various cultures have understood about physiology, but the birth control practices of many societies indicate at the very least a comprehension of the fact that conception is caused by the meeting of male sperm and the female egg. The complexities of this process are many, but basically conception can be prevented in two ways: by either killing the sperm, or by blocking the entrance to the cervix and preventing the sperm from entering the uterus. A third method is avoidance of intercourse during the approximately four days of the month when a woman is fertile, but but there is no evidence that the female monthly cycle was correctly and fully understood until the 1920's. Most birth control methods (aside from abstinence, abortion, and infanticide) used available materials to either kill the sperm or prevent its entry into the uterus.

Comprehension of the process of conception and means of preventing fertilization is evident as early as ancient Egypt. Remarkably, their birth control methods were structurally similar to the same methods we practice today. In April 1899 three pages of papyrus were found at Kahun, dating from approximately 1850 B.C. These sheets of papyrus (the Egyptian type of paper) contain gynecological prescriptions and instructions. One sheet had eroded into 46 different pieces, and when reconstructed revealed instructions for three birth control methods. The first is a mixture of crocodile dung (that's crocodile shit) and a paste-like material. Crocodile dung is alkaline to a degree similar to contemporary spermicides, that is, it chemically neutralizes the sperm when it enters the vagina. The paste presumably would dilute the dung to a non-infectuous level. Elephant dung was later used as a contraceptive in India. Several Arabic physicians of the ninth and eleventh centuries wrote that elephant dung was an effective contraceptive when mixed with honey.

The use of honey as a contraceptive is common to many cultures, including Egypt. The Kahun papyrus mentioned a prescription of honey and natron. Natron is native sesqui-carbonate of soda, a compound which contracts the mouth of the womb and makes impregnation unlikely. Honey clogs the sperm, and prevents it from passing through the cervix. The third contraceptive method mentioned in the papyrus is a gum-like substance inserted in the vagina. This too would serve to clog the sperm and prevent its entry into the uterus.

A later Egyptian text, the Ebers papyrus from about 1550 B.C., discusses a contraceptive of the lint tampons moistened with the juice from fermented tips of acacia shrubs. The major chemical ingredient of acacia shrubs is lactic acid, which (surprise!) is one of the most commonly used components of modem spermicides, both jellies and creams, including the types used in diaphragms. Birth control methods of the ancient Hebrews reveal a great deal about classic dynamics of population control. Ancient Hebrew law declared prolific reproduction a blessing, and the Mishna (an ancient source of Hebrew law) stated that men must continue to propagate children, at least until he has two sons. The Hebrews followed this commandment of reproduction, but after the exile from Egypt and settlement in Israel, it was clear that the agricultural way of life had reached a point of population saturation. Law was adapted to allow only preservation of the race, that is, that each couple, when physically possible, have two children. Adjustment was relatively simple, because the original law allowed women to practice birth control.

These methods are startlingly "modern." In cases where the health of the mother was threatened, abortion was allowed, and operations were performed late in pregnancy in which the embryo was removed from the stomach of the mother. Another common Hebrew method for prevention of conception was the insertion of a sponge in the vagina, thereby blocking the sperm from entering the uterus through the cervix. This sponge method was widely used in nineteenth century America and England.

Hebrew women also prevented conception by drinking the "cup of roots," which is actually the first known historical mention of an oral contraceptive. The potion was a mixture of Alexandrian gum, alum and garden crocus. Contemporary science does not indicate whether swallowing this potion would actually prevent conception, but when inserted in the vagina alum acts like natrol, as a spermacide, and Alexandrian gum stickily prevents the sperm from passing through the cervix. The method was apparently common in Israel, particularly among prostitutes and women who found it physically difficult to bear children. The quite common use of the method is some indication that it did in fact work.

"The use of honey as a contraceptive is common to many cultures including Egypt."

population for the Greek city state, and encouraged abortion and the exposure of deformed infants as a means of controlling population. Aristotle also mentioned that his contemporaries prevented conception "by anointing that part of the womb on which the seed falls with oil of cedar, or with with ointment of lead or with frankincense, commingled with olive oil." Olive oil acts as a contraceptive by reducing the mobility of sperm, and the other oils have an acidic affect which acts as a spermicide.

These basic principles of conception prevention are evident in lslamic practice as well. Ancient Arabic cultures recommended use of a tampon soaked in pomegranate pulp with alum, rock salt, or cabbage leaves with tar. Alu, like natron, is an astringent and spermicide. Rock salt causes sterility, though it can lead to infection when used without sufficient dilution. Pomegranates also serve as a spermicide.

"The History Of Birth Control" Part II will move east to contraceptive practices of the Orient and South Pacific. Also, information on the history of the condom, and the struggles and successes of the modern birth control movement, which had its beginnings in 1820's England.