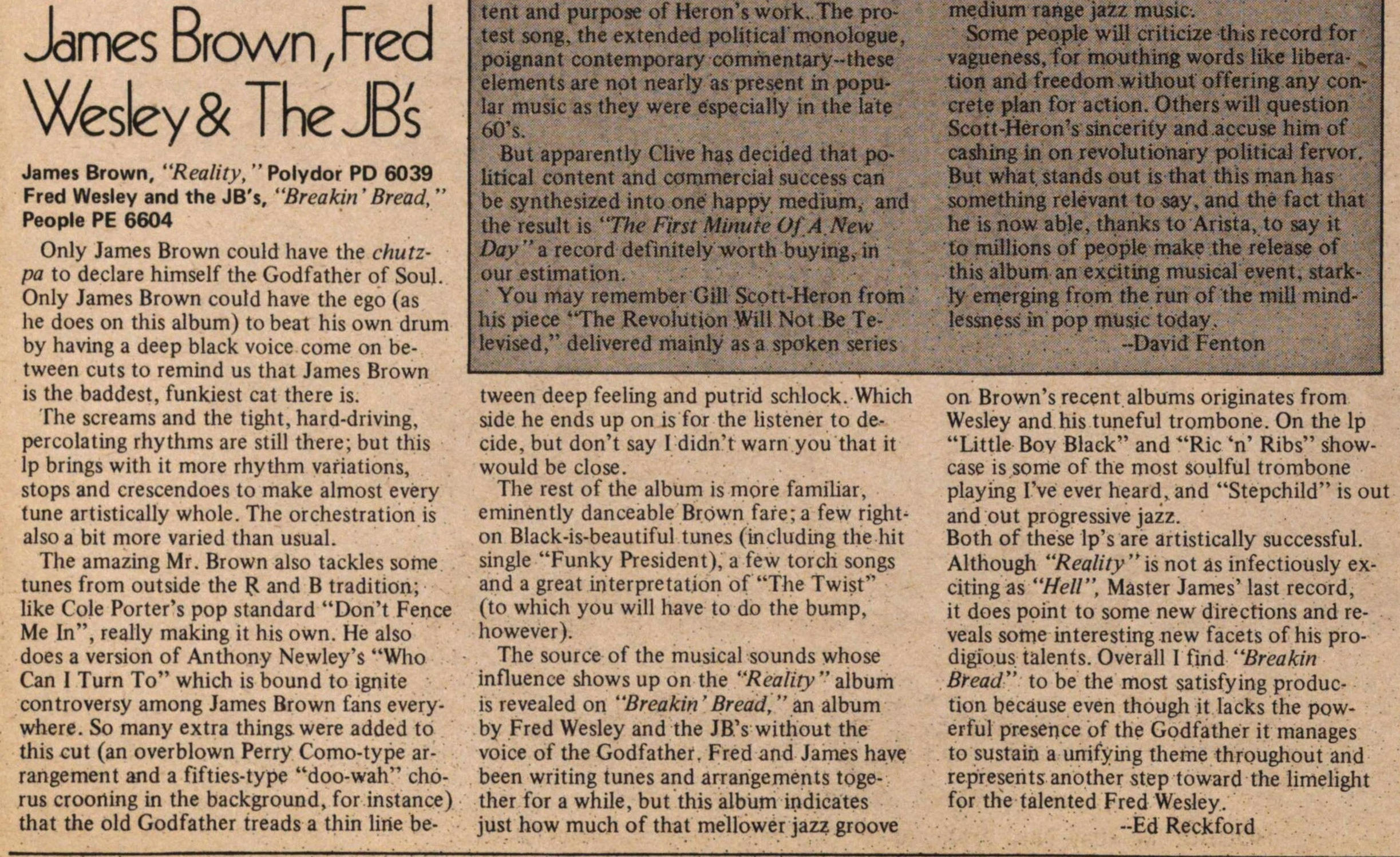 The screams and the tight,hard-driving, percolating rhythms are still there; but this lp brings with it more rhythm variations, stops and crescendos to make almost evéry tune artistically whole. The orchestration is also a bit more varied than usual.

The amazing Mr. Brown also tackles some tunes from outside the R and B tradition; like Colé Porter's pop standard "Don't Fence Me In", really making it his own. He also does a version of Anthony Newley's "Who Can I Turn To" which is bound to ignite controversy among James Brown fans everywhere. So many extra things were added to this cut (an overblown Perry Como-type arrangement and a fifties-type "doo-wah" chorus crooning in the background, for instance) that the old Godfather treads a thin line tween deep feeling and putrid schlock. Which side he ends up on is for the listener to decide, but don't say I didn't warn you that it would be close.

The rest of the album is more familiar, eminently danceable Brownfare; few righ-ton Black-is-beautiful tunes (including the hit single "Funky President), a few torch songs and a great interpretation of "The Twist" (to which you will have to do the bump, however).

The source of the musical sounds whose influence shows up on the "Reality " album is revealed on "Breakin' Bread," zx album by Fred Wesley and the JB.Y without the voice of the Godfather. Fred and James have been writing tunes and arrangements together for a while, but this album indicates just how much of that mellower jazz groove on Brown's recent albums originates from Wesley and his tuneful trombone. On the LP "Little Boy Black" and "Ric 'n' Ribs" showcase is some of the most soulful trombone playing Pve ever heard, and "Stepchild" is out and put progressive jazz.

Both of these lp's are artistically successful. Although "Reality " is not as infectiously exciting as "Heil", Master James' last record, it does point to some new directions and reveals some interesting new facets of his prodigious talents. Overall I find "Breakin Bread" to be the most satisfying production because even though it lacks the powerful presence of the Godfather it manages to sustain a unifying theme throughout and represents another step toward the limelight for the talented Fred Wesley.