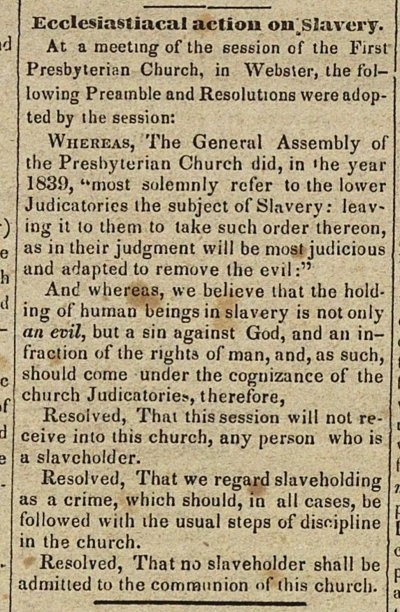 At a meeting of the session of the First Presbyterian Church, in Webster, the following Preamble and Resolutions were adopted by the session:

Whereas, The General Assembly of the Presbyterian Church did, in the year 1839, "most solemnly refer to the lower Judicatories the subject of Slavery: leaving it to them to take such order thereon, as in their judgment will be most judicious and adapted to remove the evil:"

And whereas, we believe that the holding of human beings in slavery is not only an evil, but a sin against God, and an infraction of the rights of man, and, as such, should come under the cognizance of the church Judicatories, therefore,

Resolved, That this session will not receive into this church, any person who is a slaveholder.

Resolved, That we regard slaveholding as a crime, which should, in all cases, be followed with the usual steps of discipline in the church.

Resolved, That no slaveholder shall be admitted to the communion of this church.