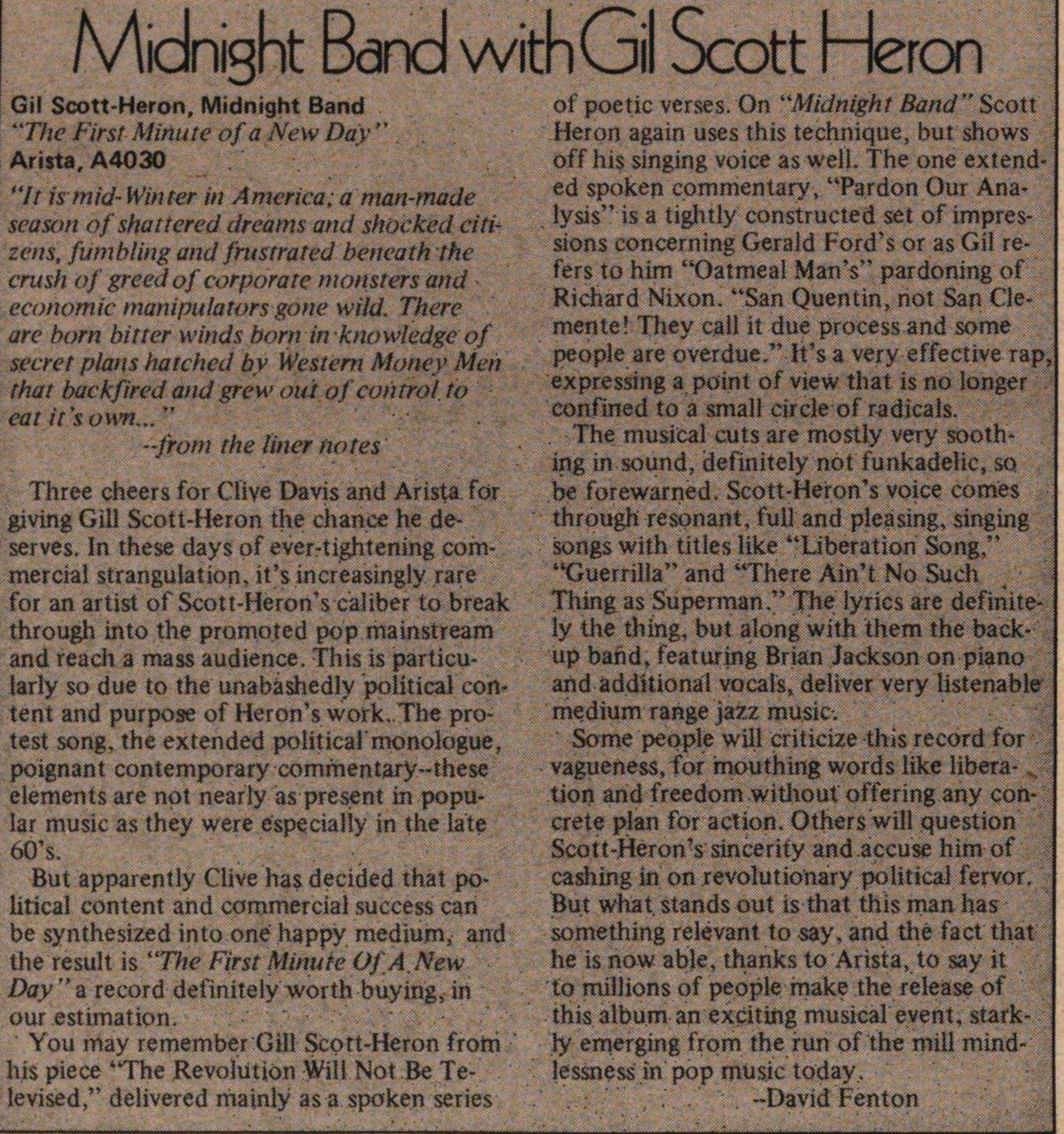 "it is mid-Winter in America; a man-made season of shattered dreams and shocked citizens, fumbling and frustrated beneath the crush of greed in corporate monsters and economie manipulators gone wild. There are born bitter winds born in knowledge of secret plans hatched by Western Money Men that backfired and grew out of control, to eat its own... "

--from the liner notes

Three cheers for Cïive Davis and Arista för giving Gül Scott-Heron the chance he deserves. In these days of ever-tightening commercial strangulation, it's increasingly rare for an artist of Scott-Heron's caliber to break through into the promoted pop mainstream and reach a mass audience. This is particularly so due to the unabáshedly political content and purpose of Heron's work.The protest song, the extended political monologue, poignant contemporary commentary-these elements are not nearly ás present in popular music as they were éspecially in the late 60’s.

But apparently Clive has decided that politica! content and commercial success can be synthesized into one happy medium, and the result is "The First Minute Of. A.New Day '' a record definitely worth buying, in our estimation.

You may remember Gill Scott-Heron for his piece 'The Revolution Will! Not Be Televised," delivered mainly as a spoken series of poetic verses. On "Midnight Band" Scott Heron again uses this technique, but shows off his singing voice as well. The one extended spoken commentary, "Pardon Our Analysis" is a tightly constructed set of impressions concerning Gerald Ford's or as Gil refers to him "Oatmeal Man’s”' pardoning of Richard Nixon. "San Quentin, not San Clemente! They call it due process and some people are overdue." It's a very effective rap, expressing a point of view that is no longer confined to a small circle of radicals.

The musical cuts are mostly very soothing in sound, definitely not funkadelic, so be forewarned. Scott-Heron's voice comes through resonant, full and pleasing, singing songs with titles like "Liberation Song," "Guerrilla" and "There Ain't No Such Thing as Superman." The lyrics are definitely the thing, but along with them the backup band, featuring Brian Jackson on piano and additional vocals, deliver very listenable medium range jazz music.

Some people will criticize this record for vagueness, for mouthing words like tion and freedom without offering any concrete plan for action. Others will question Scott-Heron's sincerity and accuse him of cashing in on revolutionary political fervor. But what. stands out ís that this man has something relevant to say, and thé fact that he is now ab)e, thanks to Arista, to say it to millions of people make the release of this album an exciting musical event, starkly emerging from the run of the mili mindlessness in pop music today.